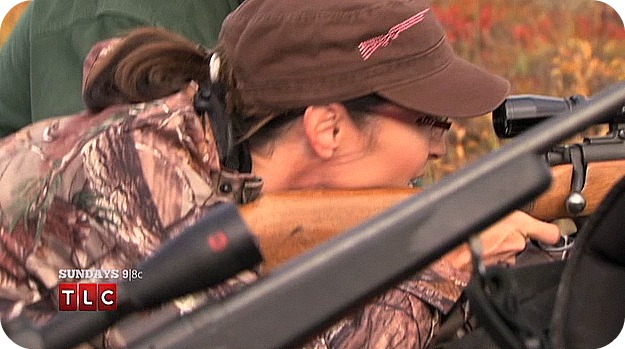 This week, my interview with Steve at The Maine Outdoorsman went live. Steve said yesterday 200 people hit his site viewing over 500 pages. That is a lot of people reading about little ole me and hunting. Why?

When I think of women who are in the general public’s eye and hunt, I can think of 2 – Country singer Miranda Lambert and Sarah Palin. Why only two? Why is the female hunter such a fascinating thing? (I should probably note that I do not have cable so any and all female hunters on the hunting stations are lost to me. I’ll keep it to the general public because that’s what I am familiar with.) People/media were fascinated by the fact that they could get footage of Palin and her gun, shooting (and gutting) animals but I feel like the nostalgia would be lost if they had the same footage of McCain. Lambert and her hubby Blake Shelton tweet photos of their kills, and comment on what/where they are hunting. I only know this because I follow both. That’s it. I can not think of any other women who are public about their hunting.

As I am writing this, a coworker made a comment about another coworker needing some vacation time and that he would be better after his drunken hunting weekoff. Maybe that’s why women hunting is so interesting – we don’t fit in the mold of the at-sports-camp-drinking-lots-of-beer-not-really-hunting stereotype of a hunter. At least for me, hunting is a serious thing. I am not a big drinker anyways, but the idea of drinking and hunting (even if its a hangover from the night before) terrifies me. I have a very healthy respect for my gun and I know that even though the safety is on, its not 100% safe. The idea of shooting myself (or my dad) makes me sick to my stomach (I felt bad when I hooked his finger while we were fishing when I was maybe 10) so I know I need to be on my game when I am holding my 30-06.

Im proud to be a hunter and I think its really cool that I get to have the chance to hang out with my dad, be in the Maine woods and hunt in the same area my grandfather’s did when they were my age. I like being a Maine girl who hunts – so where are all of the other women???

I think overall, I was excited for turkey season.  I really was.  Then May came and we went fishing, celebrated Mother's Day and found ourselves busy.  Dad and I had one morning to head into the woods to hunt. We had moved the blind closer into the...
Read More

My friend George Smith publicly announced that he had been diagnosed with ALS early this year.  When he told me in late last summer, I was shocked and saddened. I can’t imagine the Maine outdoors without George in it.

Why We Hunt: Belonging

For those of you who live out of State or have not picked up the November issue of Downeast Magazine, here is my article online.  I would love to hear what you think about it.  Thanks! Why We Hunt: Belonging
Read More