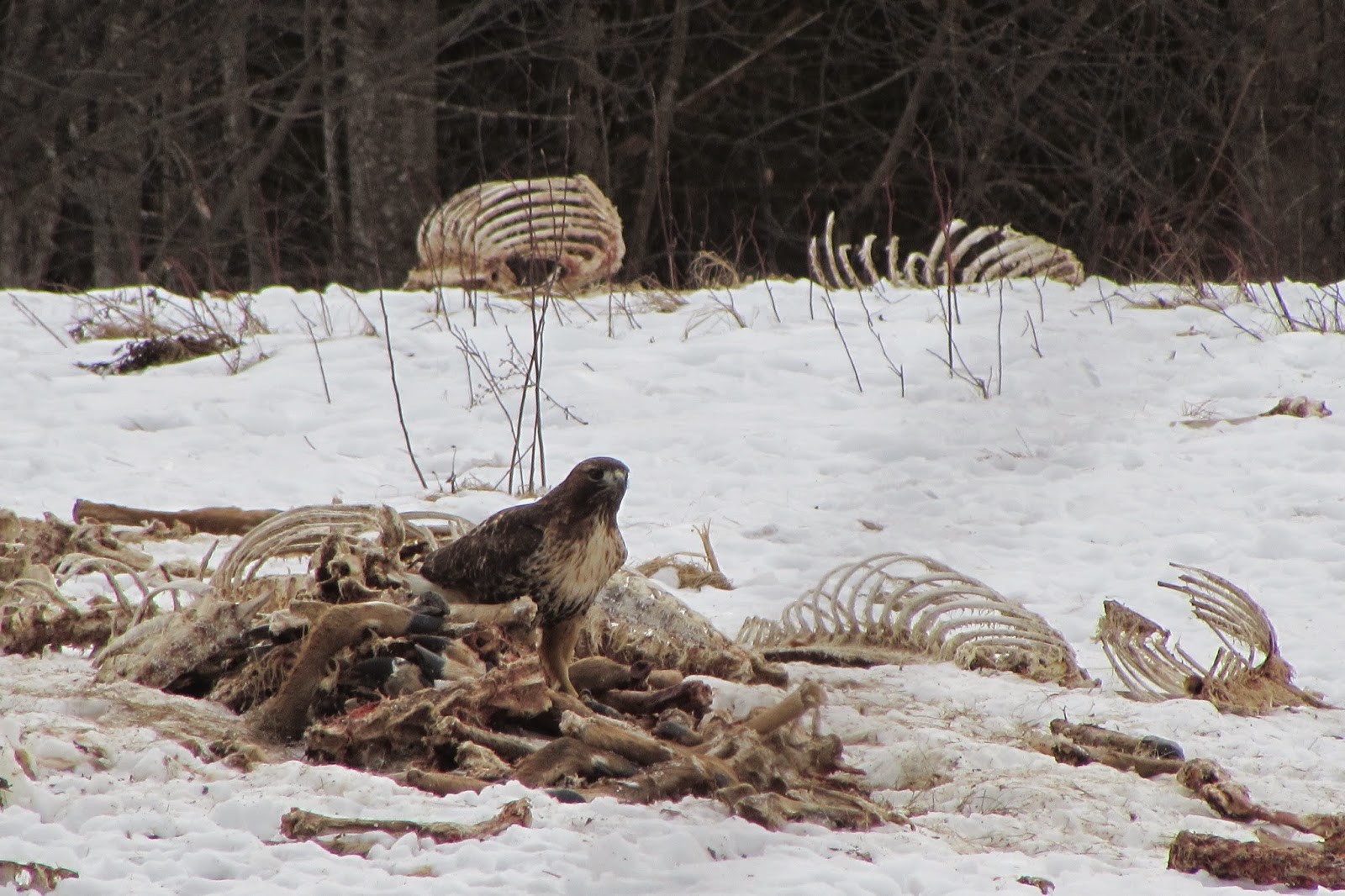 I don’t know if I should have eaten more or less but my stomach was freaking out when Steve and I sat in the blind.  I kept adding layers to keep warm and to see if I could muffle the growls.  I hoped that nothing would hear me and run off.

Steve and Lorri (who had taken me bear hunting) had put out deer carcases from a local butcher about a week before.  The pile of bones were strewn all over the field by the coyotes that had been there.  We got settled into the blind and watched the crows picking away at the pile furthest away.  My stomach growled and they flew away.  I hoped that something else scared them away but I wasn’t sure until I saw this guy sweep in.  The Red-tailed hawk flew down onto this pile and started picking away.  I was able to get a few photos until the sun started reflecting off of the lens and spooked him.

Steve started the call when the sun sank behind the trees.  The first call was of a female coyote.  It is mating season so we were hoping to call in a male.  I hate coyotes.  I think that they are the things that nightmares are made of.  Even though I saw the call about 30 feet in front of us, and knew that Steve was operating it, it was freaky sounding.  The second call was of males being territorial.  Also horrible sounding.  Then, he started the wounded rabbit call.  That was by far the worst sound ever.  I really hope rabbits don’t make noises like that but if they do, I never want to hear it.

The rabbit wailing continued and the brown hairy decoy with a bright white tail waved back and worth.  I could not figure out how any animal would see that and think that it was an animal. It was about 12 inches off the ground and at on top of a black metal stick.  I kept scanning the field looking for movement.

My stomach started rumbling again and I moved forward to try and keep it quiet.  When I did, I scanned the field again and saw a red animal off to the left watching the decoy.  I had not seen or heard him come in, he just seemed to appear.  He watched the decoy and then looked behind him, then looked back at the decoy and then back behind him.  I couldn’t tell if he was sitting or standing but he was stopped.

I hit Steve’s leg “Is that a coyote?” I lifted my gun up and pointed it out the window.

Steve had to learn over and almost touched the barrel of my gun with his cheek.

“Should I shoot him?  He keeps looking behind him”

Steve backed away from the gun but I shot before he could cover his ears.  I saw the coyote turn his head around again and then he was gone.  I kept watching to see if I could see any movement. I thought I saw a leg kick up in the air but I wasn’t sure and the coyote had fallen down a knoll so that we couldnt see him.

I didn’t care about my gurgly stomach at that point.  I was very excited! I had shot a coyote.  I had saved a deer.

After a few minutes, we got out of the stand and walked along the edge of the field to find the coyote.  I kept looking into the woods for the other coyote(s) that were with this guy.  We approached slowly in case he was wounded but it was clear that he wasn’t.  He was dead with a bullet hole in his neck.

I had Steve take these pictures and then we loaded him into the truck and headed out of the woods.  It was a successful hunt and we were excited that we could help the landowner.  There was one less predator in the area.

Since this coyote is my first, fairly big and has a great coat, I am going to get the hide tanned and the skull removed.  I am still not a fan of coyotes but I can now say that I have successfully hunted them.

I really like Steven Rinella. I have never seen one of his shows (I dont have cable) but he was kind enough to send me two copies of his book American Buffalo signed and ready for auction at this fall's BOW weekend. I follow him on Twitter and he posts some great...
Read More

In 2015, I have a few goals that I am hoping to finally accomplish. 1. Get a turkey!  I came close last year, but I am hoping that the 3rd time is the charm. 2. Goose hunting.  I had plans last year that fell through so I am hoping to try that this year. 3....
Read More