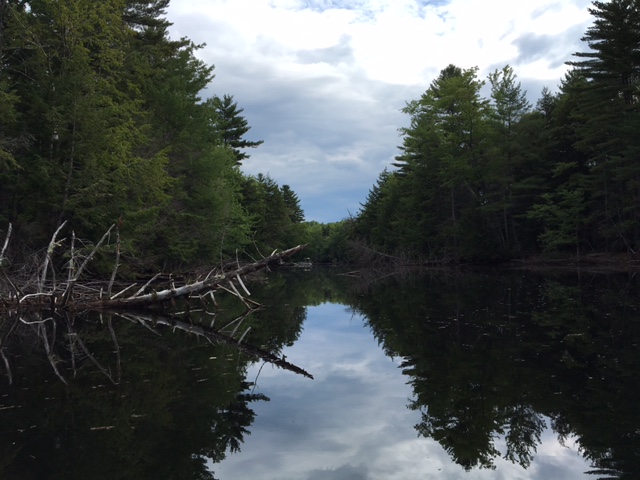 I have no idea what Staci said after the words “water snake” came out of her mouth. I went into panic mode wondering if I was going to snag one with my fishing pole or if every bubble that came up from under the canoe was a snake below us. But, the plan was to catch bass and we climbed into the canoe and paddled off to do just that.

We started off with frog lures and within the first two casts, I had a bump on my line but nothing hooked. After a few more casts, Staci was landing bass on a regular basis.

She was out fishing me almost 10 to one and I knew that I needed to hook something.  I cast into the shallows under one of the fallen down trees and boom! had a bite.  The fish hit and dove.  I could see the bass’ light colored belly as it turned and went under the canoe.  Then, all of the tension was gone and so was my lure.  The fish grabbed everything and completely straightened my swivel.

I quickly got a new swivel and bigger lure tied on and kept casting.  Staci pointed out a fish that had surfaced a few times behind us.  That wasn’t a fish!  We gave each other a look of understanding, put of rods down and paddled as the snake’s head lifted out of the water and swam towards the opposite shore.

When we were a safe distance away, we started casting again.

Staci landed more bass and her first Pickerel. We talked, paddled, had a few motor boats pass us and fished. It was a beautiful day.  I was enjoying my time on the water and the beautiful scenery.  This was what made Maine fishing great.

After several hours, we decided to head back and get some lunch.  I was still unsuccessful in landing a fish. Staci went right back to catching bass.  One one cast, I had another bite and saw the long, skinny body of a pickerel under the water.  I was grateful that it threw the line before I got it into the boat.

My next cast was almost comical; I watched as the entire set up went flying into the water.  My line broke completely.  I was struggling. It was not my day on the water, that was for sure.

Staci fixed the line and put on a dark blue, crayfish lure.  It had a bright red hook attached to it. In my mind, it was too big and so odd colored (dark blue, really? will a fish see it?) that I was sure that I would throw out a few more casts and call it a day.  Staci was determined to have me catch at least one fish!

We paddled up to the dock where we had launched and started casting.  Boom! something grabbed Staci’s line.  She set the hook and reeled. Whatever it was, it was big and not going without a fight. Suddenly, her reel snapped up and her lure was gone. The count was up to 3 at this point… good fishermen lose lures, right?

Another boat passed us and asked if we were catching anything.  I let her answer and I sat there and smiled.  I wasn’t paying attention when I threw out my next cast and almost immediately, my pole was bending. Please, don’t let it be a snake! I thought as I started reeling.  I was totally focused on landing this fish. I knew that once I got it close enough to the boat, Staci would have to help me net it.

I kept the line tight and when he came to the surface, I reeled more to get him as close to the boat as possible.  It took a few tries, but we got him into the net.  That blue crayfish lure had worked!  Staci and I each held it and estimated that the fish was between five and six pounds, which is impressive for a small mouth!  It is the biggest fish that I have ever caught, of any species!

We had a very successful fishing trip! For the most part, we avoided the snakes, lost lures and hooked some great bass along the way. You can’t beat a great fishing trip with a friend.

← Trying to capture the twins In the woods: Water birds →

I have about five blogs that I need to finish and post but here is a sneak peak of one of them. I am flirting with the idea of into fishing so we headed to Grand Lake Stream to see if I could land some of the world renounced land-locked salmon there.  This is the...
Read More

It was 21 degrees when we headed into the woods. I just needed a deer to complete my grand slam. I had a doe tag and was eager to get into my stand. The leaves were crunchy with frost but the woods were calm.  I climbed into the Sky Condo and waited for the world to...
Read More

On Sunday, I went ice fishing. I had never, ever been fishing before (unless you count the time I caught 13 sunfish when I was maybe 10) and had a vague idea of what to expect. I relied on this to shed some light on what to expect. I was at the pond at 6:45am, trying...
Read More