It doesn’t get better than hunting on snow 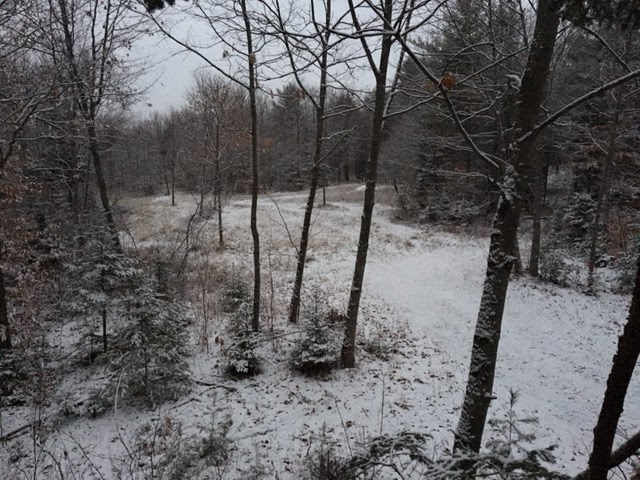 It doesn’t get better than hunting on snow

There was a storm coming in on Thanksgiving night, so Dad and I started and ended our day in the woods.  It was silent when we walked into our stands in a turkey induced semi-stupor. The silence didn’t last long.  For almost two hours, we listened to someone target practicing or just shooting different guns.  It was ridiculous and I still can not understand why, during hunting season, someone would do this when they could have waited until Sunday (when we can’t hunt.)

When we went to bed Thanksgiving night, the cold rain had turned to snow and on Friday morning, there was enough on the ground to track. Snow turns me into a kid! It could be an early snow in Oct, a Christmas show or the type that you dread in March but for me, I get giddy.  I was the first one up and dressed on Friday morning.

The woods were totally silent. The animals had not woken up yet and I loved how bright the world seemed under a coating of white. The silence was broken by steps. It was still too dark to shoot but there was action.  I had to lean forward from the Sky Condo to watch a spike horn cross in front of me (from the bottom right, the deer crossed between the second and third tree.) He was headed back to his bed or to eat and was not stopping.  I watched him cross the roadway and head into the woods until he disappeared into the grey darkness.

I knew that I couldn’t get down immediately and follow him, so I wanted until it was legal hours and then headed into the woods in hopes of seeing more deer moving and maybe crossing paths with a larger buck. 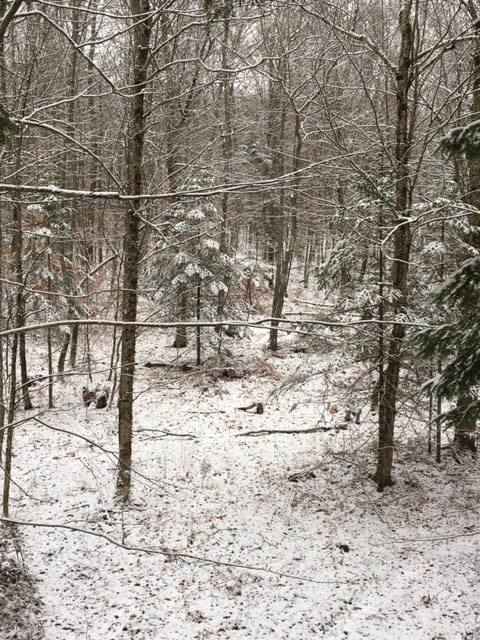 The bows of the tree kept me from being snow/rain/sleeted on and my wool clothes kept me dry and warm.  I was relaxed and happy in the tree, just watching and listening.

I saw Dad’s blaze orange before I heard him.  Not surprising, he had jumped a group of six does on his walk to get me. We stood talking next to my stand, when he suddenly crouched and reached for his gun. A deer was trying to sneak past us!!! Maybe 50 feet from us, a deer was slowly walking past us, fully aware that we were there but hoping that we would not notice.  Before Dad could get his gun up, the deer had taken one bound and disappeared into the trees.

I headed into the woods and Dad headed down the past that I walk in on, to see if one of us could get a better shot (and for me to see if it was a buck.)  The only snap I heard after that was Dad walking back out.  The deer had crossed back down by the Sky Condo.  I would have see it if I had been sitting there… maybe it was that spike again?!

During our afternoon hunt, the snow started to melt in the rain. About 30 minutes before the end of hunting hours, I heard a shot. Dad! I pulled out my phone and waited.  It was 4pm.  Then, it was 4:10 and my phone had not rang. At 4:20, another shot rang out.  I went through the scenarios in my head: Dad shot the buck and it ran so he had to track it and then one more shot to finish it off or maybe he had missed the first time and then tracked the deer and got a good shot.  I kept waiting for my phone to buzz but it never came.  The shot was close though.

I walked out of the woods and within minutes, Dad was behind me.  He had thought the same thing – that the shot was me and he couldn’t understand why I wouldnt have called him, unless I had shot a coyote or something.  We still are not sure who was so close to us and shooting.

As much fun as it was to hunt in the snow, we knew our hours were numbered. I had one more day in the woods.  Dad, with his muzzleloader, had two more weeks but one more day hunting with me. Rifle season was almost over!

I had no idea who she was. I was stuck watching the bike racing, some volleyball, maybe a little swimming and gymnastics. I would have had the TV on the entire time if the TV station had skeet shooting on. Especially since Kim Rhode became the 5th individual of all...
Read More

The plan was to shoot does from the property.  The only out was the big buck that we had been tracking.  Hubs was the first who successfully shot a doe in the afternoon of opening day of rifle season.  Having sat through almost all types of weather...
Read More