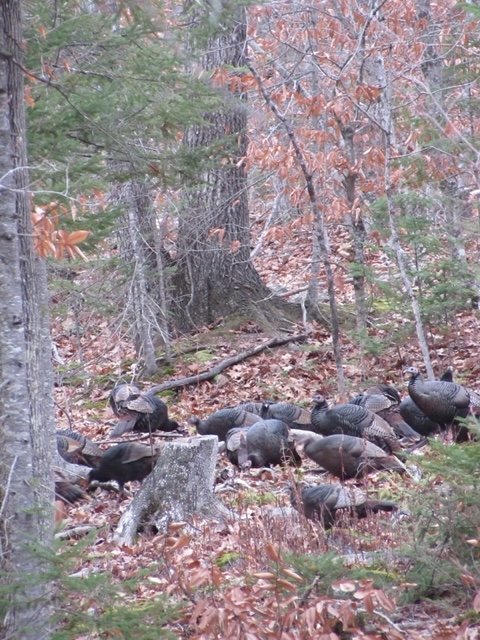 There are a few less turkeys in Maine to hunt this year, as they have been taking turkeys to Texas.. A few months ago, Maine Inland Fisheries & Wildlife in partnership with the National Wild Turkey Federation, captured and released more than 50 birds into East Texas with the hope of rebuilding their population.

“Eastern turkeys are where the restocking efforts originally began,” explained Shawn Roberts, Director of Field Operations for the National Wild Turkey Federation, “We tried in the 1920’s but it didn’t work.
We tried pen-raised birds and that didn’t work either. The only thing that was successful was to trap birds and relocate them to good habitat.”

“We started this current effort in the early ‘80s and we had to begin looking outside the state to see if we could get them moved in. We didn’t want to violate The Lacey Act so we had to come up with a way to compensate the states that were giving up a resource either by trading other wildlife or paying them monetarily,” said Roberts.

Texas is on the very edge of the Eastern Turkey’s natural habitat.  “We live in the fringe habitat.  I35 is a good marker… everything west is Rio Grande and everything east is Eastern Wild Turkey habitat,” explained Roberts, ”In the 1800s we deforested the land and destroyed the populations of turkeys and whitetails. So far, we have been able to bring back other populations and now, we are trying
to get the turkeys back.”

“The more birds we can release at once, the better the efforts can be,“ Roberts continued, “Texas Parks & Wildlife identified areas that would work, but it has to be land owner-driven because we have a lot of privately owned land. The minimum land requirement is 1,000 acres of continuous acres of habitat.  We spent 4-5 years working with landowners to put this section of land together to ensure we have the number of acres that we needed. There are now more than 60 landowners in this initial co-operative and we ended up with 63,000 acres.”  But getting the landowners on board and the land is not the only thing that needs to be in place for the reintroduction to happen.

“We segmented the land into four different co-ops to be evaluated. They have to go through a GIS survey with the result showing no less than a 50/50 split of woods and fields and ideally, it would be a 30/70 split. From there, the land has to go through a habitat suitability index study where biologists come on to the land with their criteria and they independently rank it and then average their scores and if it’s 70 or higher, then you can move ahead with the restocking,” said Roberts.

“This is the first year that we have been a part of this project,” said Kelsey Sullivan, Maine’s turkey biologist, “We started trapping them in February in Zones 23 and 17. Texas has asked us for 50 turkeys a year over the next 3 years so we are just starting this program.”

It takes about 48 hours from the time the turkeys are captured until they land in Texas. “We take blood from each bird and test them so that we know they don’t have any diseases.  Those tests get to the folks in Texas about 24 hours before the birds do so that we know all of the birds are clean and ready to be released when they get there,” explained Sullivan.

The National Wild Turkey Foundation pays for the boxes and getting the birds from one place to another as well as the birds themselves.  “We pay $525 per bird,” said Roberts.  The money from this project goes into an NWTF large super foundation.  “It is earmarked to be used to support habitat and research. The money goes in there and then we can use it for projects that we are doing for turkeys here in Maine,” said Sullivan.

Taking Turkeys to Texas is a great project that demonstrates how successful these types of programs can be.  Maine itself had to reintroduce turkeys and now, the state is in a position that it is able to help other states
rebuild their populations.  “Hopefully in the next 5-10 years, we will have a huntable population here in Eastern Texas”
said Roberts.   We shall see!

It had been an emotional start for our 2021 Maine moose hunt.  But we pushed on and had three more days before the season ended.  Wayne was determined to find us a moose somewhere in Zone 2.   Thursday It was rainy and cold when we headed out.  The two bulls from...
Read More

As I was reeling in the first bass that I would keep, Don started the GoPro to document the actual catch.  Hmm... I may need to get one of those! Come here please. Gotcha! Bringing him into the boat   YUM A big thanks to Don at Maine Outdoors for sending...
Read More