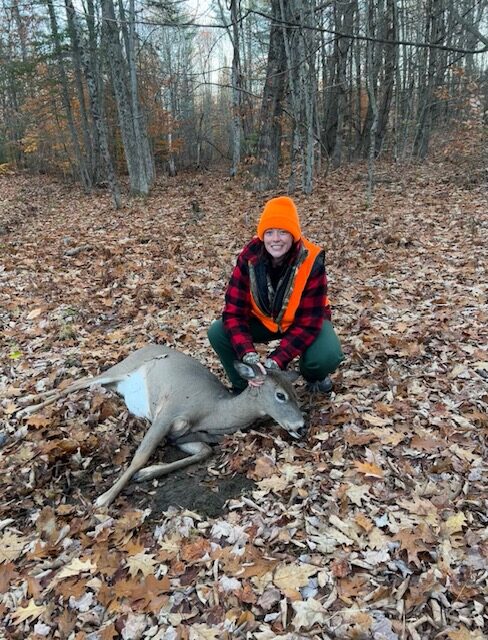 I was relieved to see my name on the list of people who had received doe tags in the lottery.  There were so many doe on our trail cameras that it seemed likely that we would be successful. But, as opening day got closer and closer, illness struck my household and I was the last person standing without a tissue or cough drops in my pocket. In my attempt to ‘quarantine’ myself, I packed up and headed north.

My watch read 32 degrees when Dad and I snuck into the woods. At a fork in the trail, Dad paused and waited for me to get into the Sky Condo before he continued on. I flicked off my headlamp and watched his light disappear around the corner.  For all I know, the deer stood there and watched us split up because just when Dad started walking to his stand, there was an eruption in the woods and all I could hear was a deer blowing.  I listened as it ran parallel to my stand but I could tell that it didn’t completely run off.

Things had barely calmed down when I saw two headlamps at the far end of the field. The neighbors. Usually, they hunt away from our property line but apparently not this year.  I watched the two lights skirt the side of the field and disappear.  Another blow from a deer off to my right.  There were a lot of deer around this morning and they were not happy.

The sun was starting to clear the trees but the birds and squirrels were still relatively quiet.  I scanned the woods and field looking for movement. There was doe off to my right. I grabbed the gun and realized that I was sitting too close to the door to swivel around and get a quick shot off. I lifted the barrel of the gun over my head, keeping the butt tight against my chest. My body was in line with the doorpost, forcing me to twist to get the gun out the window. 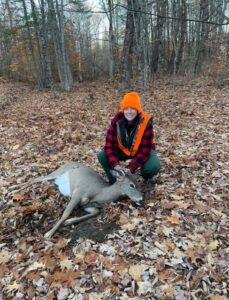 The doe knew something was wrong.  She paused and stomped. She walked towards me and began turning to walk away.  I put the crosshairs on her shoulder and squeezed. A puff of smoke and her white belly lay facing me.  It was 7:31am.  Rifle season has been underway for about an hour. One tag was filled.

Many of us love this time of year. Now that hunters can take a doe AND a buck, my season was not over.

← A breakthrough in PFAS research? This is why my land is posted →

And will stay that way. Years ago, I had my first negative run in with another hunter. Since then, we have posted all of our land and we have added to the number of trail cameras that we have out in the woods. Sometimes we see vehicles driving into our food plot.  In...
Read More

We spent a few hours in the woods last weekend and I came across this pile of scat on the side of an old log.  It almost looked like the mystery critter could sit on the log and use it as a toilet seat. Who left this behind? It looks like turkey poop but there is...
Read More

At this point, Staci and I just say that we are doing shed hunting but in reality, we just walk through the woods and see what we can find.  Our latest trip was quite the adventure.  I took Staci to T3 and showed her where Dad had shot his doe.   The...
Read More