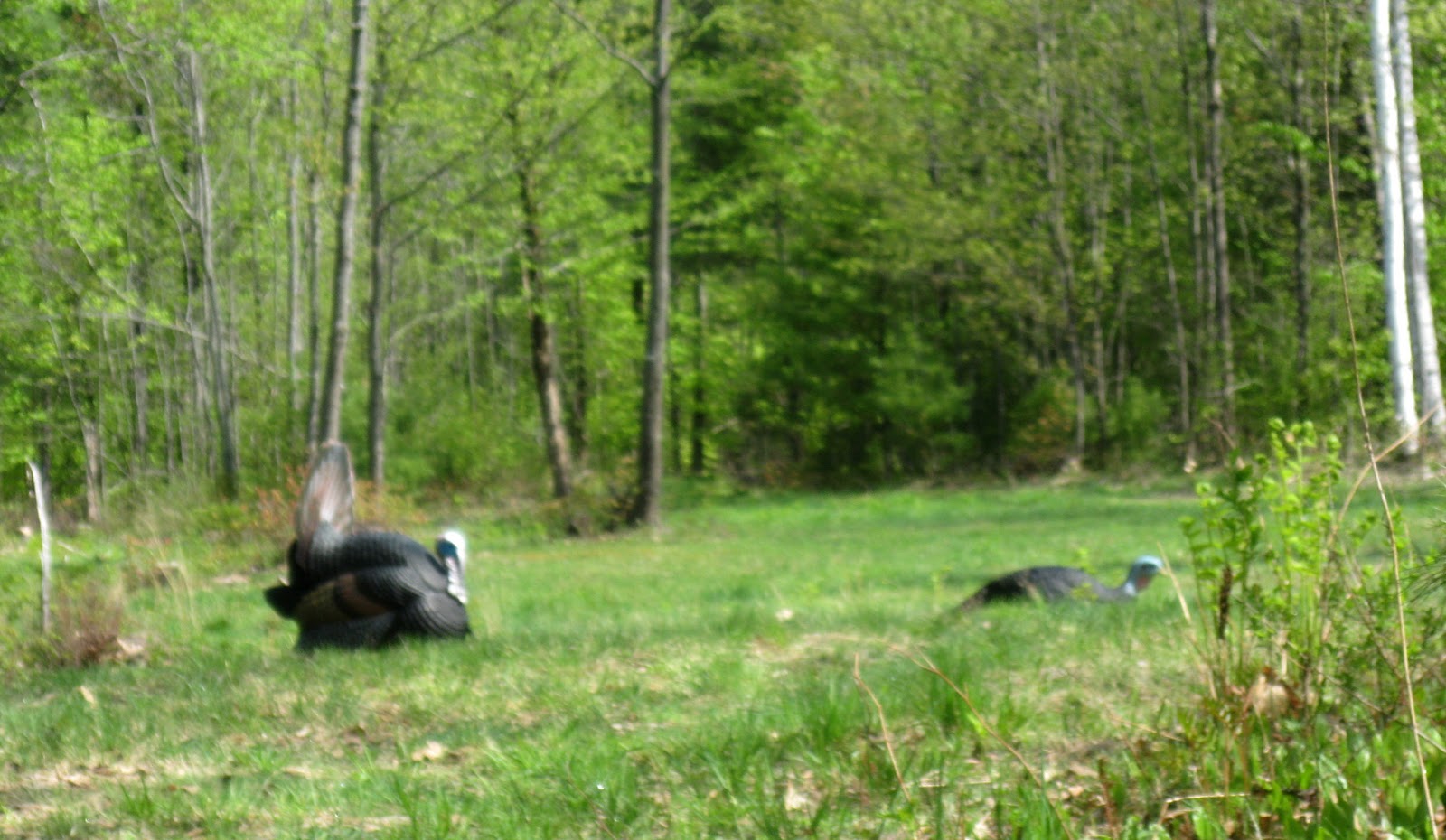 It
is hard to hunt anything when there are rain drops falling off the
trees.  It is probably the worst during deer season when everything
sounds like the snapping of a branch.  But, this was my first day of
turkey hunting and having never been before, I had no idea what I should
be listening for besides a gobble.

Dad
and I had two decoys set up about 15 yards away from us.  I had a slate
call, a box call and my camo on.  It was starting to get light out when
we reached the blind; that time of morning when you can not tell if you
really are seeing something move or if it is just your eyes.  It was
probably a little later than we should have been in the woods, but we
are new and learning.

About
a half hour after we sat down, I saw a bird fly down.  There was still
some ground fog so I could not tell if it was a jake or hen (or tom, but
it seemed kinda small).  Dad couldn’t tell either.  I continued to
call, but a little quieter than I had before.   The bird took its time
and meandered through the grass, eventually coming right up to the
decoys.  It was a hen.  We watched her walk around, unsure if I should
keep calling or stop so I didnt spook her.  At this point, we had been
turkey hunters for all of 1 hour.

When
she left, we called some more but decided to check out some other
areas.  We headed to some fields near the house.  There was a slight
breeze and the sun was out now (does wind direction come into play with turkey hunting the way it does with deer hunting??).
I tried my box call and on the second attempt, I had a response!  I
kept calling and Dad headed off in the direction of the gobbles.  Not
knowing if I should follow him or try to get the turkey to come to me, I
slowly walked towards where Dad had headed and kept calling.

Dad
was pushed up against the side of an embankment peering into the
fields. He held up 3 fingers.  I kept calling but started walking away
from Dad, not wanting to draw the bird’s attention to where he was.
There was a shot and I stopped calling and headed back.  I joined him on
the side of the bank and looked out into the field.  I saw all three
heads looking around.  Then, they started to run into the woods.

“I
missed ‘em” Dad said and started pacing off where he had shot to where
the birds were.  About 60 yards.  Now, if this was a deer, it would have
been dead with one shot, no problem!  But, this is a whole new animal
with a shot gun and not a rifle.

When
we got home, Dad paced off the distance again and shot twice into a
target.  The spread was about 5.5 feet and that was with the choke
almost all the way on.  We went out again for another hour or so but we
didn’t see any more birds that day but it was a fun experience to have
on our very first day of turkey hunting.  We will get out a few more days this season, but we are already plotting how we will go after the turkeys next spring.

This year, Dad and I decided that we would sit out of the moose lotto. It made sense. In 2010, when Dad was picked, we spent a solid 8 hours a day riding the roads in his truck looking for moose, walking around in the woods calling for moose and seeing a lot of...
Read More

The skull of a bear

I got my skull back from Lori and Jim at New Frontier Taxidermy!  They are incredible.  Not only are they tanning my bear hide but they saved my skull.  Saved it! A look into my bear's mouth  One of the things that I did not want to tell people was...
Read More