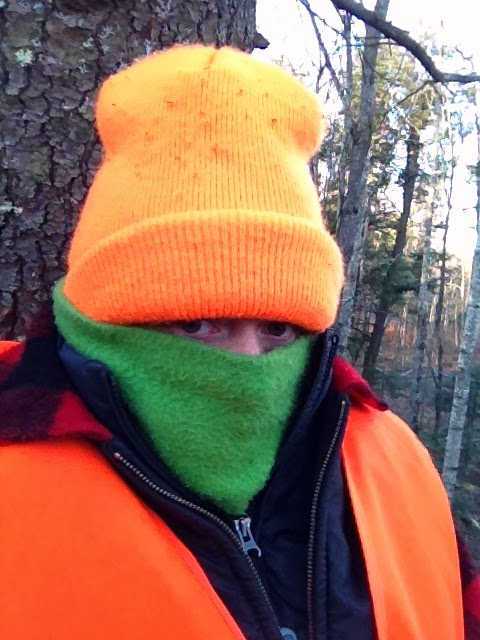 7 degrees.  7 flippin degrees is what the thermometer read when we headed outside on Friday morning. I was as bundled up as possible with hand and toe warmers.  Hubby headed to the Sky Condo with instructions to start walking around 7:30am.  Dad dropped me off at our newest tree seat and he took off to make a loop around me.  The plan was for Hubby to come from the right, Dad from the left and me, in the middle, shooting any deer that happened to get jumped.  If it had antlers, it was going down.

When it is this cold, I go into owl mode where I really don’t move much more than my eyes.  Plus, I had on so many layers, I could barely move.  Ready for this: 3 pairs of socks with toe warmers, snowmobile boots, 3 layers of long johns under my wool pants and 7 layers on top including my awesome red and black plaid wool jacket.  Plus my neck warmer and hat.  When it wasn’t breezy, it actually wasn’t too bad.

There were gray squirrels, a red squirrel, chick-a-dees and nuthatches all hanging out with me as the dawn broke and more and more area became visible.  There were no shots early but an hour after legal hunting hours, a shot rang out in front of me.  It was in about the same area as where Dad shot the coyote last year.  It had to have been Dad!!!

I uncovered my fingers and dug out my cell phone waiting for the call to come.  2 minutes… 5 minutes… 17 minutes and nothing.  Crap!  I went back to owl mode and waited for the sun to reach me.  Around 8:30 or 9, Dad emerged from the woods.   He was carrying his wool jacket and his orange hat sat high on his head.

Yeah. That doe and pair of lambs were out eating corn. You could tell they have never been shot at because the lambs never moved.

I dunno.  I missed.  He shook his head and I could tell he was mad at himself.  We met up with Hubby and headed to a new spot.   I sat again and got cold again.  Even the walking didn’t totally warm we up.  But I went to a new spot and sat while the guys went walking.

Lunch came and went.  Dad and Hubby saw a few deer either running from them or blowing in thick spots where they could not not make out a good shot.   It got up to 28* when we went in for lunch and I made sure I was bundled back up for the night hunt.

We went over to the mountain for the first part of the afternoon.  I dropped Dad off along the roadway for him to walk up the east side of the mountain.  I drove the truck a little further and dropped Hubby off so he could walk up the front of the mountain, then drove another mile or two into the woods and parked the truck, loaded up and headed up to the original tree house.

It was nice to sit up there and be out of the wind.  I waited for a couple of hours before Dad appeared.  We headed back down and picked Hubby up.  When he got into the truck, he said that two hunters had followed him up the mountain.  Awesome! Two men with guns, trespassing!!!!  Hubby had quickly gotten to the top of the mountain and waited for Dad to meet up with him.  If it had been me, I would have marched towards them (I know, I know) and asked them if they had landowner permission.  Since I knew they did not, I would assume they would say yes or there would be an awkward pause, at which point, I would have said, “You know, Bob.  Tall guy with blonde hair who owns this land” and when they agreed with me, I would tell them that my Dad (who NO ONE would describe like that) owns the land and they needed to go.  My willingness to fight is why Dad wouldn’t let me go yell at the guy last year who trespassed.

We ended the day back where we started and headed out when it was dark.  Nothing.

When I woke up Saturday, I immediately went to the thermometer.  4*!  It was colder than the morning before.  It was the last day of rifle season so not going out was not an option. When Dad got up, I announced that I would be sitting in the Sky Condo with the heater.

The ground was frosted and it was loud walking in.  It was actually so cold that the trees were snapping themselves and faking us out, thinking that there were deer coming.  As the morning went on, I hugged the heater more and more.

The sun had just started to hit the back portion of the field when Dad stepped out of the woods and headed towards me.   He stood at the bottom of the stand and talked with me, waiting for Hubby to show up.  He had not seen any deer but had seen a couple new stands and saw a few more hunters.  We waited a little longer before I sent Hubby a text to find him and get him to come back to the Sky Condo.   When the group was together, Dad jestered to have us get going to another spot.

No way!  Im sitting here with this heater!

The guys left and headed to the next spot to hunt.  The sun was still trying to inch its way across the field and onto the SC.  I huddled around the heater and rattled the set of antlers we had there.  Nothing.  I tried the bleet.  Nothing.   Then, poof! My heater ran out of propane.

For the next two hours, I used an extra pair of toe warmers to keep my hands cold.  My nostrils and eyelashes were freezing and I could feel the condensation melt when I closed my eyes.  As much as I tried to say it was just the cold air, my nose began to plug – but just one nostril.  I wasn’t getting sick!

The minute I saw Dad appear again, I was down from the Sky Condo and in the sun!  It felt good to get some warmth on me.  Dad and I did a bit of scouting at the back of the clearing where deer usually traveled.  There were lots of signs, hooking on a few bushes and a clear trail.  Just no deer.  We waited for Hubby to meet up with us (he is new to the hunting area and still learning how to not get lost when we give him directions like ‘follow the skidder trail’ or ‘stay on the old snowmobile trail til…’ or even ‘when you hit an old choppin’ that looks like a jungle, stay right’.)

After lunch (which we didn’t get to until 1pm) we headed back over to the mountain.  At this point, my ‘frozen’ nostril was not thawing very well and my throat was a little dry.

I told Dad that I wanted to sit back in the SC after we hunted on the mountain.  Hubby and Dad dropped me off and I walked up the mountain to my tree house.  They took a new (old) hauling road and were going to come out above me and walk down to get me.

The afternoon wore on and the sun started to go down. I figured we were going to be done soon and not go sit.   I was ok with it because I was eating Vit C drops non stop. My nostril was stuffed now and I could feel the drain of getting up early (and having a baby sleep in the same room with you) throughout the season.  Bambi had bested us.

The sun had just dropped below the trees when I heard crunching.  I tightened my hands around my gun and moved to look… it was Dad.

He had jumped 5 deer on the slope but they ran in the wrong direction.  He had run along a side road in an attempt to make enough noise and force the deer down towards me, but they outran him and were not going to be easily swayed by one man.  Dad had instructed Hubby to go back down the way he came up and meet us at the bottom.   Dad showed me a few fresh tracks that had gone right past the tree house and we walked over to the spot where I had shot my first deer.  There were deer around but we were not meant to get one this year.  Mother Nature was keeping us humble.

Although we had a third person join us, Dad and I ended the season the same way we started it.  Together, walking in the woods.

← How to hunt with three people Back to the beginning →

I am afraid that I could really get addicted to fishing.  The only thing that is really stopping me are those images of fishing hooks embedded in fingers, thumbs, hands etc. and realizing that that could be me.  I shutter! But when Al took me out fishing on...
Read More

"I was looking for a narrative that described who we are as hunters,” my friend Robbie Kroger explained to me, “Essentially looking for an authentic truth about who we are. I couldn't find it. So we built it with Blood Origins.” If you have never heard of Blood...
Read More

I had to buy raffle tickets from these two men. It was a hunter's breakfast raffle with money going to American Legion Post 192. I will know if I win on November 5th - a week after the start of hunting season, but whatever... I bought the tickets because I need a new...
Read More