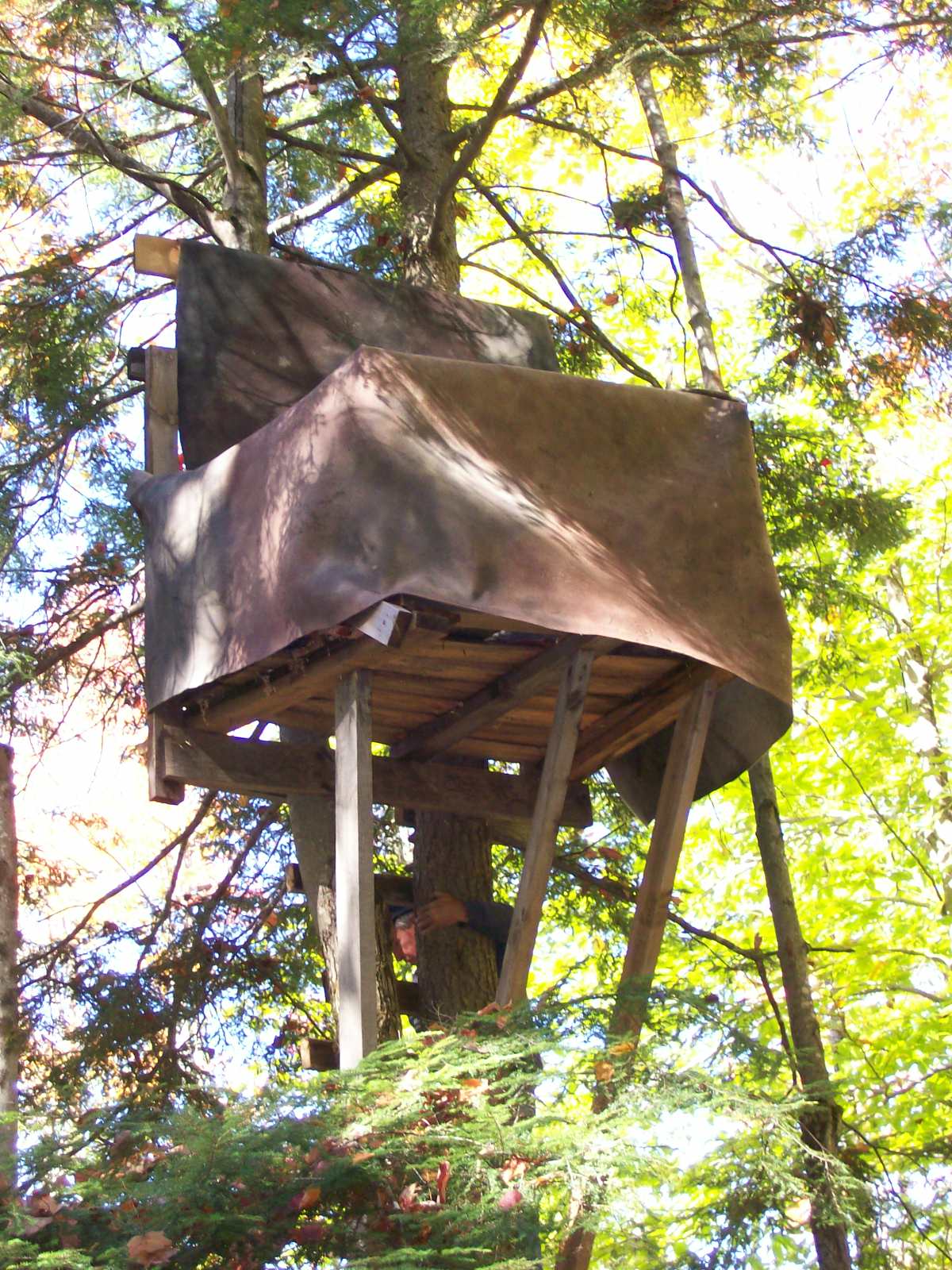 During the last two weekends of hunting season, we headed over to the spot where it all started!

While Hubby and Dad decided to still hunt on the mountain, I needed a place to sit.  Dad said that our original tree house was still safe if I wanted to go there.  He advised me that the roof (made of canvas) had caved in a bit and that could pose an issue.  I hate to be on the ground and trying to hunt, so I figured I would take my chances.

When I approached the stand the first time, it looked good.  Not as good as it did when we first built it seven years ago, but stable and strong.

When Dad and I built it, (this was our first attempt at a tree stand), we haphazardly nailed boards to the tree to make steps.  They were not even distances apart nor did they have any extra room for larger boots. Climbing up them again had me wondering what kind of limber monkeys we thought we were back then.  It was a sketchy climb up but I made it.

Once I wiggled my way inside and got my gun in, I realized how slanted the box had become. From the start, it slanted forward a bit but this was more than I remembered.  I moved the stool as close to the tree as possible so that I was on the highest – and most stable- part of the stand.

The roof was usually propped up with a wooden stake.  I remember one morning, I hit the stick and the roof collapsed on us.  Even though it had partially collapsed, I realized that we had put in a good effort to keep up.  Wood and metal combined to prop the wooden stake up but age and weather had jammed the stake sideways.

Either way, as I sat in the upper most corner, the roof created a block from the wind, which was great, but it also blocked my vision if any deer were moving away from Dad or Hubby.  I couldnt rely on sound since the wind was still gusting pretty good.

Each time the wind blew, the stand would shift and creek and I would lean against the tree a little more.  It was nice to be blocked by the canvas and still have somewhat of a good view.

Between gusts, I heard footsteps.  Definitely footsteps.  They were coming from my right but I could not see any deer.  I was afraid that they had walked in but turned and walked up the mountain instead of walking through the gap in front of me.  I kept an eye and ear out as best I could and waited.

It was a great spot!  Half way down the mountain, surrounded by oak and beach trees with a stream running off to my left.  I shot my first deer from this stand – and being back in it, made me realize how impressive it was that Dad and I both fit into it and had room to get my gun into position to shoot.  But, this is where it all began.  This was the spot where I became a successful hunter.  This is where Dad and I spent hours during my first real season, talking about hunting and the deer herd in the area.

A few hours after climbing into the stand, Dad came to get me.  It had been him who I had heard walking and not a deer.  We reminisced about my first hunt, where the spikehorn had come in from, where I had shot him and where he had died.  I told Dad that I wanted to rebuild the stand and make it more sturdy for us to hunt from next year.

I dont know if we will or not, but the memories from this spot are wonderful.

← Well played, Bambi. Well played. The one who lived another year... →

My son’s baseball game ended at 1:30pm.  As soon as we got into the car, I clicked the link to watch  names being read for the 2021 Maine moose lottery.  I had 21 points going into the lottery.  I watched Nate Webb, Director of Wildlife, read my brother in...
Read More

Remember this guy?  I was fortunate enough to meet him last March when he was a brand new black bear. I knew that our awesome bear biologist were out checking dens and sent a message to one of them asking if they had gone to King's den yet and if the cubs were...
Read More