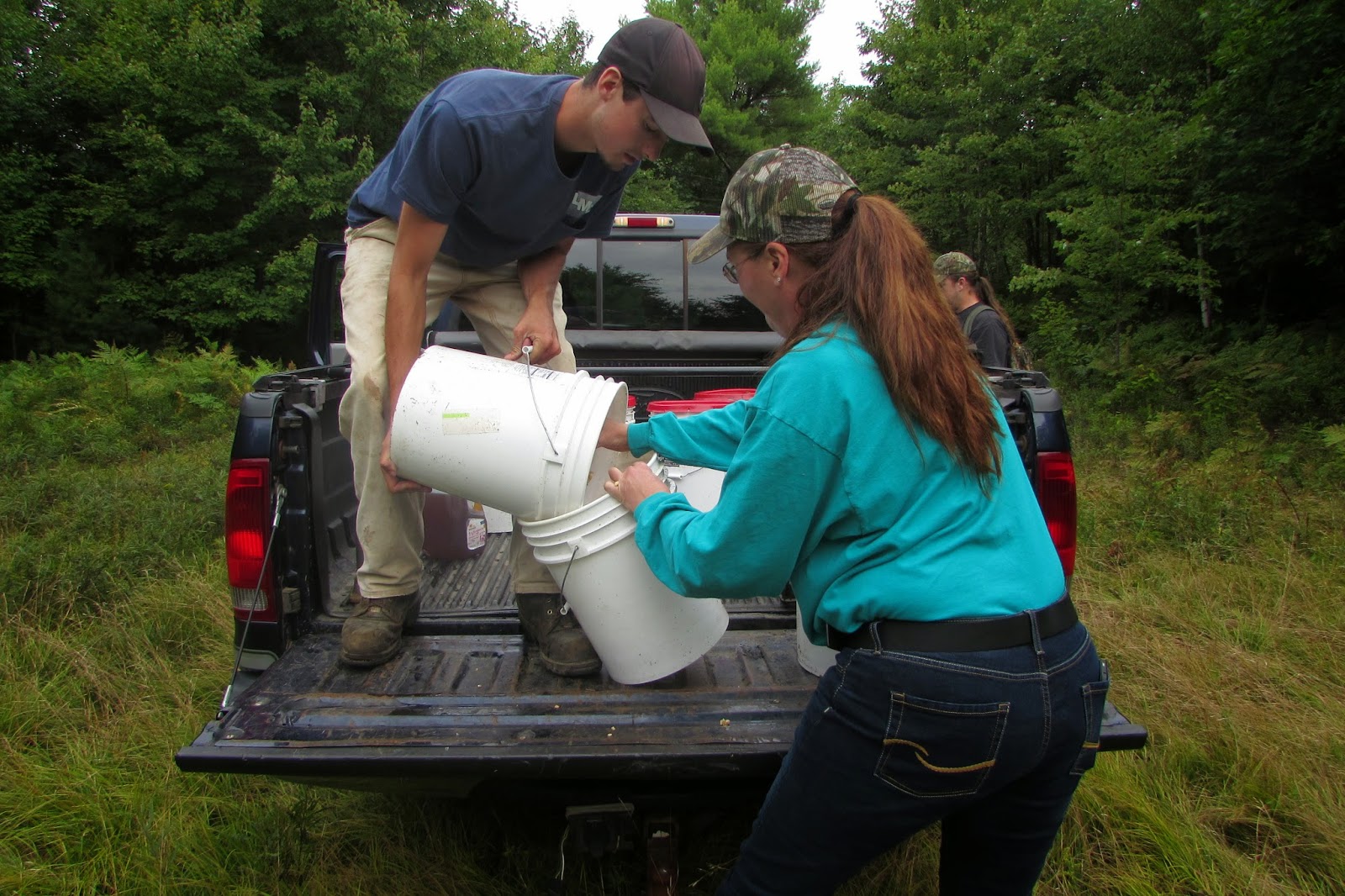 I was sure that beaver was the grossest smell ever, but I was so wrong. It is easily rotten lobster bodies – the kind that are put into black trash bags and left out in the sun and forgotten about.  I dont think any of us didn’t gag, hold our breathe or pull our shirts up over our noses in an attempt to stop the smell from penetrating into our nostrils.  We added it to one of the beaver carcases and for the first time, I really had to question a black bear’s eating preferences.  Of course, there is also the ‘good’ smelling bait that looks like it could be a bunch of $7 granola bars from Whole Foods dumped together and mixed with this great strawberry smelling stuff.  That, I don’t mind being around.

It was another day in the woods baiting with Steve.  We also had his girlfriend Lorri and their friend Lance with us. We headed yo a new-to-me spot where Steve had killed his 420lb bear a few years before.  The site had been hit!* The camera was an old school one that had film in it.  With 18 pictures taken, we knew we would have to find a place to get the film developed!  Lorri and I walked around the site and saw bear poop so the anticipation for what was on that camera heightened.  We refilled the bait and dumped the lobster bodies on top of the beaver (I took photos of this happening but for everyone’s sake I will not post them.  They are very unflattering pictures of us gagging and nearly puking) but we filled everything back up and headed out.  We went to Lance’s site and had to tweak a few things.  It had not been hit so we refreshed the bait and moved on to Site 1 and Site 2.

Without Lance, the three of us grabbed bait and some secret ingredients and headed into Site 1.  We walked as slowly as excited people could.  A bear had been coming in regularly and we so wanted to see some good pictures.  The minute we rounded the corner, we could see that the site was destroyed! The crate was thrown, the beaver was torn apart and on the ground and bark was clawed off of a tree from the ground up about 20 feet.  Claw marks were on the trees… yikes!

Steve walked over to the camera and noticed that it was moved. Turned.  A bear had hit in, leaving claw marks on the tree and turning the camera away from the bait site.  Tricky bear!  Not wanting to spend too long in the woods and trying to beat a storm coming in, we refilled and headed to Site 2.

Site 2 was still in tact.  Nothing had some in but there were some pictures on the camera.  We scanned them and saw that a bear had come in, smelled the bait site and left.  He never stopped to eat or check things out more than a quick sniff.  Bummed, but still excited from the Site 1 action, we declared that the worst part about not getting hit, is having to carry the full buckets back out of the woods.

On the way back home, I asked Lorri about hunting bear and what her experiences had been.  She has shot two bear.  One from a treestand and one from the kitchen window (which is impressive).  She gave me pointers on where to aim depending on where the bear is.  It will be different because we are going to be in a ground blind instead of up in a tree.

Steve and Lorri also trap so I asked her about it since Steve’s 420lb bear was in a trap.  I mentioned that I would be terrified of releasing a bear from a trap and Lorri’s comment was the best.  It was exactly what people should hear from bear hunters as a prime example of responsible hunting; “If we see cubs on the cameras, I will pull my trap.  The last thing I want is to get a cub and have to release it knowing that Mamma bear is around.  I will just pull it and wait until the male bears start coming in and by then the sows and cubs are gone.”

We take to the woods on Monday!  I have Monday and Friday scheduled to be in the blind waiting for the bears.  I am nervous, excited and relieved that Steve and Lorri will be with me.  I bought the bear tag for my license and will be sighting in my gun this weekend.  My clothes will be washed in unscented soap and I will say a little prayer to Mother Nature that I have a successful hunt and no one suffers (me or the bear!)  Wish us luck!!!

← We are in business now! New (and some of the best) bear pictures →

As we plan for 2021, we know that we will not be attending sportsman’s shows.  We won’t be able to catch up with fellow hunters, trappers and anglers and we won’t be spending money on all of those raffle tickets. And that is hurting hunting organizations – a lot. Many...
Read More

The Maine Outdoorsman: Women Gone Wild - Interview: Steve found me via Twitter and we struck up a conversation about hunting and being a female hunter. Here is my attempt to do the sport justice and represent the female side of things. Hope you all enjoy it!
Read More