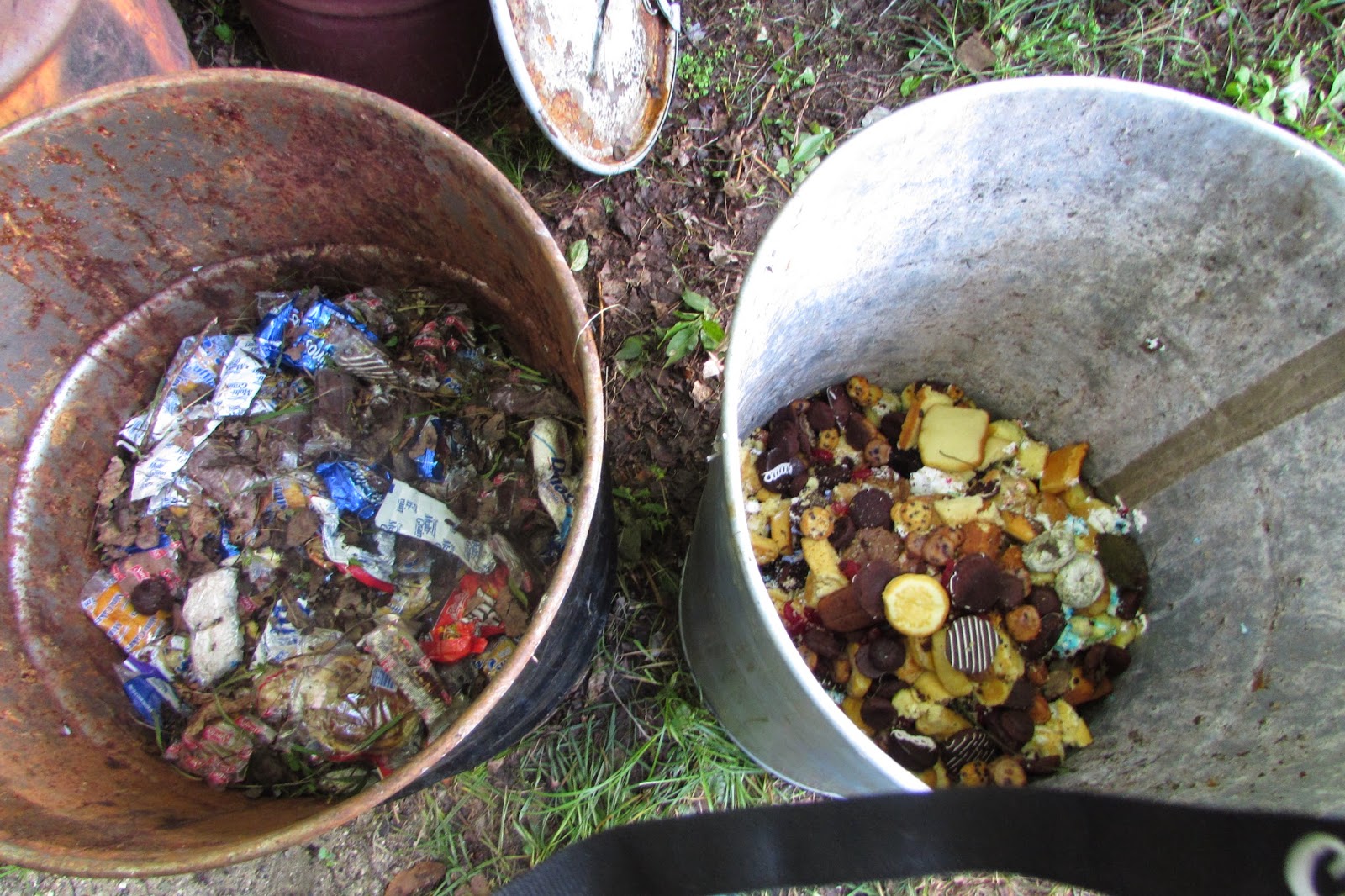 I was
lucky that it was only 73 degrees out!  I would have melted after we
headed to the first bait site. I carried buckets filled with bait and
some secret ingredients to keep the bears coming back again and again.
While I was glad to not be carrying the bucket with the cut up dead
beaver, I was reminded of my position down wind of it after every few
steps.

While
I support bear hunting as it is now in Maine, I did not know a lot about it and
felt that if I was going to support this fight, I should know what I was
talking about.  So, I told Steve that I
would try everything, including preparing bait buckets.  If you ever want to cut sweets out of your
diet help out with preparing bait barrels.
For more than an hour, I opened packaged sweets that had the overall
smell of a cheap bar. The smell wasn’t what got to me, it was the fact that
they contained no mold! What kind of “food” doesn’t mold after more
than a year?!

Once
I had done my duty of opening up bait, we loaded the truck and took off.  Three buckets of sweets, some secret
ingredients and a bucket or maybe two filled with chunks of previously frozen beaver
(THAT is the worst smell ever!). We drove a while and came to the first of two
sites along a dirt road close to the middle of nowhere.  I willingly grabbed two buckets and followed
Steve into the woods.  He had started the
sites three days before so we were not sure if we would need to top off any
bait or muck out the buckets after some pretty heavy rains.

Site
one had not been hit yet. Everything seemed to be in place and fairly dry so
we moved on to site two.  This one was
probably my favorite since it was located at the bottom of some rock cliffs. I
stood at the site and looked at the cliffs surrounding me in awe.  This site was also in pretty good shape so we
added some scents and left for site three.
A little closer to home, site three was further into the woods and
surrounded by low blueberry bushes.
Again, no bears but we did finally have pictures on the trail cam- of a
turkey vulture.

When
we were done, we had been working the bait sites (and prep) for eight hours. There is
nothing easy or quick about baiting bears. The hours that go into preparing the
bait followed by bringing the bait out into the woods and keeping it fresh… I
have a whole new respect for those who do this on a regular basis.

We
had no pictures and no signs of bears coming in but with determination and a
knowledge of the work involved, Steve was confident that we would eventually
get something.  I’m still not totally
sure I want to shoot a bear but I am learning more and more about the work involved
in trying to make that happen.

Anatomy of a bait site

Bear season officially ends this week for me (Nov 28 for those who wish to still hunt them) I went out a couple of times and while this happened, I did not fill my tag this year. Luckily, I have a decent amount of bear meat left from last season so I will be in good...
Read More

To bow or not to bow

Mentally, I am not ready to hunt with a bow.  I am confident in my rifle to know that I can drop a deer dead in its tracks.  I have seen the damage that my 150 (or 180) grain bullet can do to the inside of a deer and I am comfortable with that because I know...
Read More