I took the family on a little road trip earlier this week to get out of the house.  We ended up in the same area that I was bear baiting and were I would eventually shoot my bear.  It was the first time I had been back there and it was fun to show Hubby where I had been.

When we stopped for lunch, the coolest painting was in the bathroom.  I know, I know but it was such a cool picture that I had to take a photo. 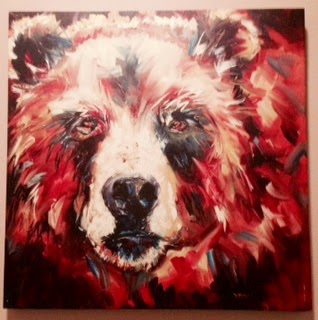 And what were the odds that near my hunting area, in that specific restaurant and in the lady’s room, there would be this painting.  Pretty neat.

No matter what animal I hunt, I always come back to deer.  Hunting predators like bear and coyote are great and I'm eager to check off turkey and moose but I plan my vacations around deer season.  After getting yelled at last season, we decided to build a...
Read More

Dad was able to mow the field around the Sky Condo the other day and when we pulled the memory card from the camera, I instantly put it into my digital camera and started turning the wheel to see if we had any bucks.  The first picture that I came to that had...
Read More

As we plan for 2021, we know that we will not be attending sportsman’s shows.  We won’t be able to catch up with fellow hunters, trappers and anglers and we won’t be spending money on all of those raffle tickets. And that is hurting hunting organizations – a lot. Many...
Read More