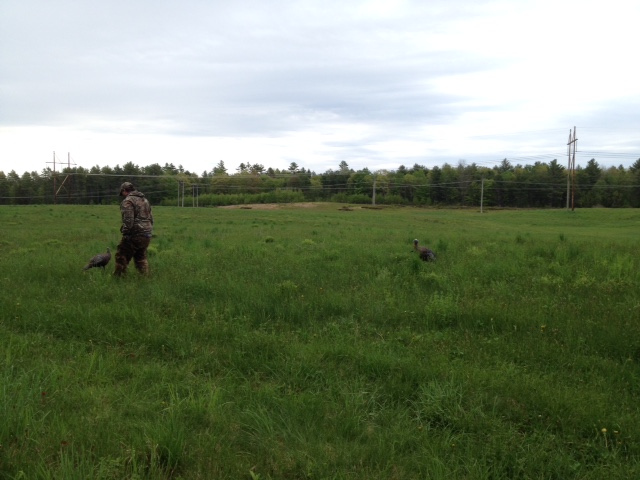 Here is how we got to this point.

The two men did not seem to see is and Tim and I tried not to give ourselves away but we were on the edge of the field.  Tim tried calling the land owner because the property was posted and he was supposed to be the only one hunting.  No answer.  We stood there and listened as the two men began calling and waiting for a response.  They were much closer to those two birds who had just been calling back with us.  One gobble and those guys would be headed into the woods. Luckily, those stubborn birds kept quiet.  But the idea of hunters in the area made us question our decision to move on from a spot that we knew had active birds.

So we carefully crossed the field and got into position along the edge.  Tim called and we could hear the birds within 50 yards of us.  No matter what Tim did, they still did not want to move.  We changed tactics and I sat in the woods while Tim moved away from me in an attempt to pull the turkeys down the trail past me.  Still nothing.  We waited and moved and called.  Those birds stayed right in that area and never moved.  At one point, we were sure that we could hear them walking past us.

Defeated, we had to head back to the truck.  Standing in the road was a tom, just walking through.  Perfect.

We tried different spots, different decoys and different days (I was able to go out for a couple of hours with Tim a couple of days later) but I ended the season without a bird.  We had a lot of them calling to us, made a hen incredibly mad when we pulled a tom away from her and made her work harder to get him back but I never had the opportunity that I had that first morning with Tim.

What little time I had to go out, it was a lot of fun with some great sights and sounds!  Guess I need to wait one more year or get lucky this fall.  We shall see!

← Third time is the charm... right? A little morning snack →

It rained.  Rained hard and the wind blew.  It was anything but ideal for finding moose in the Maine woods.  But Brian, Jenn and I knew that the weather was going to be clear and with some rain gear, we were off for an adventures.  Last year, I was...
Read More