Third time is the charm… right?

Third time is the charm… right?

As you know, Dad and I saw way more deer than turkey when we attempted to turkey hunt for the third spring season in a row.  It is still a little surreal to think about because our first turkey season ended two weeks before I had O.

My schedule was so busy that I had to cancel a turkey hunt with David Hodgkins of Blackfalcon Custom Calls and reworked my schedule to get a half day hunt in with Tim Cote of Cote and Son’s Guide Service.

I met Tim at 4am and we headed to a spot where he had been the night before.  He knew that there were toms around and he knew which spots they would be in.  It was a perfect set up.

We sat just over a little knoll with a couple of chairs and bushes helping to keep us hidden.  Tim put out two decoys and we sat there in the earliest light of day and waited.  It did not take long before we heard the first gobble. Then another and another.  We had three or four birds calling before it was truly light enough to see.  I was thrilled! There were birds around and we knew where they were.  It was already more than Dad and I had experienced.

Tim started calling when the gobbles were happening more often.  Dressed in full camo, we waited and tried to contain our excitement when we had two birds call back to us.  They were headed our way.  I moved as little as possible and got the gun in place on my knee for a shot near the decoys.

They’re coming Tim whispered.  The gobbling had stopped and before long a red head popped up from the other side of the knoll and looked around. Tim could see it but I was hidden by bushes and didn’t see them at first.  A white head popped up behind the red one, Go for the back one Tim instructed.

The jake and tom saw the decoys and moved in. The tom started strutting to impress our hen.  The two birds slowly zig-zagged their way closer.  My heart was racing and I was trying incredibly hard not to move.  I slid the safety off and waited for the tom to get closer.

Shoot Tim said and I placed the front bead on the tom’s head and squeezed the trigger. My whole body jerked back and I watched as the tom threw his wings back like he was trying to stop quick. In a split second, the two birds ran away from us and into the woods.

Tim shook his head.  Did I hit him at all? I asked.

I felt horrible.  I had had a great shot and I missed. Tim tried to reassure me that it was normal to miss. I didn’t care.  It was 5:58am and I had blown my shot at a nice tom.  Tim didn’t let me get discouraged and we tried to figure out what had happened. Was the back bead lined up with the front? Tim asked. I hung my head.  The one thing that Dad had dried to drill into my head when  he painted the back bead in an effort to help me line the two up, was the one thing that I blew and it cost me a bird. 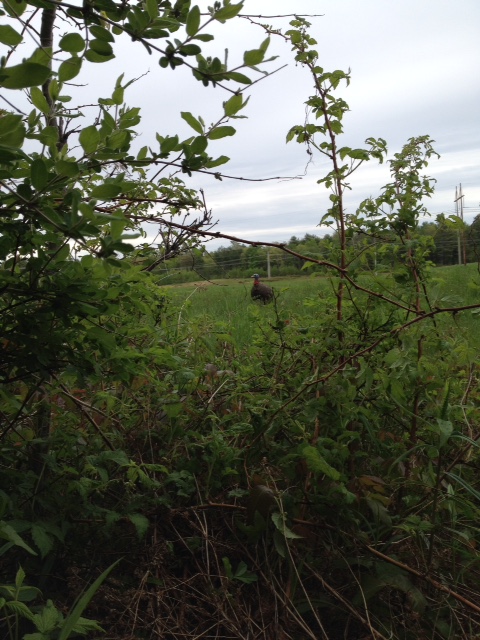 Tim and I waited about an hour before he tried calling again.  We only had to wait a few minutes before we head gobbling from the exact spot where the two birds had run into the woods. They called, we called.  They answered almost every time Tim called but they refused to come out from the other side of the field.

We decided to move to a new location and maybe come back for the birds if we had time but as we headed towards the truck, a white pickup pulled up across the field – one the same side that those birds were sitting.  Two guys got out of the truck.  They were dressed in camo.

What were we going to do?

← Moose Crossing Stay away from my bird! →

Staci and I found a great place to shed hunt.  We knew that there were deer all around and that we would be in the right spot to find something.  It had started to snow when we got there but the forecast called for heavier snow in the late afternoon....
Read More

I am getting spoiled. Actually Dad and I both are. I am afraid to write this for what it might mean for next year, but I will; Dad and I have not had to follow a blood trail in a long time. Three years ago, Dad dropped this guy (below) on opening day.Last year, I...
Read More