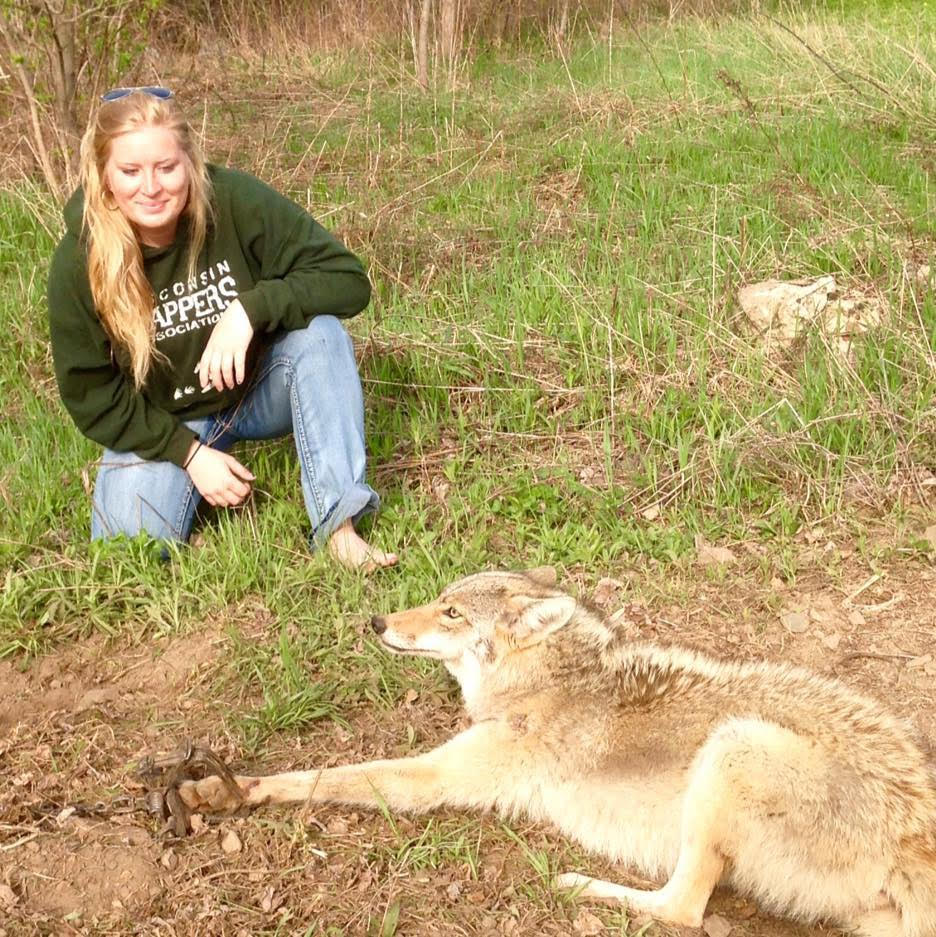 One of the few good things about social media is connecting with
folks who are like you in order to compare notes, get tips and tricks and share
in successes.  One of the coolest women that I have met is Skye Goode who
is a rock-star trapper.

Learning from the book “Hoofbeats of a Wolfer” by
O’Gorman, Skye watched her family members as they trapped mink, raccoons and
muskrats.  Her uncles got into beaver and fox trapping which helped
to give Skye a more complete picture of how to learn each animal’s behavior and
habitat and the types of traps, lures and set ups that worked best for
each.  The tipping point for Skye’s own trapping career happened when she
shot a buck, “I shot a buck with my bow in the evening and because of the shot,
I let it sit overnight.  When I recovered the buck the next morning, it
had been consumed by coyotes. It was that moment that I had the notion to try
trapping those specific coyotes, almost a sort of revenge plan.”

One of the most controversial animals to target are those
coyotes.  Coyote hunters work hard to keep the predators in check mostly
so the deer in the area have a chance to survive. But no matter what you do to
make sure the coyote hunt is ethical, someone will argue and call you horrible
names.  As someone who posts a lot of pictures of the animals she traps
online, I asked Skye how she feels about coyotes, “I am crazy about canines! I
trap fox and coyotes mainly, with raccoon and skunk on a regular basis.  With the use of trail cameras, I became hooked on fox and
coyotes.”  Posting photos on social media is a slippery slope with the
potential for a single picture to gain a life of its own.  One photo from
my bear hunt 2014 explored with an obscene amount of shares, likes and comments
(good and bad.)

Each person’s first successful hunt or trapping experience is
something that they will always remember.  For Skye, the first animal that
she trapped on her own trap line was a female coyote on the first night that
she placed the traps.  But it didn’t end the way that you would think.
Skye explains, “I went to
check my trap and saw that she was dead in the foothold.  After studying
the scene, I realized that other coyotes had killed her! So my first catch was
bittersweet because she was dead when I got there, but I kept trapping and two
weeks later I caught the alpha female coyote that killed my first catch.
I dubbed her “Scarface”, and she was definitely the culprit, evident by the
freshly healed scars on her muzzle.”

Women are targeted more on social media because of the
perception that we are not supposed to be cold, hard killers (sorry
guys) but it is something that more and more women are challenging and
starting to push back on.  For Skye, posting her incredible photos is
something she will always do, “education is my primary goal.  I have
posted many photos that show my sets/traps before, and then after I catch
animals to show what works for me. I also post videos of the catches to show
that their feet are not injured in any way.  I’ve made videos on Youtube
and Facebook showing myself putting my hands in traps as proof that traps hold,
not hurt.”

When
I asked her about the issues that she has had to deal with, I am amazed by what
she describes, “I have feel immense discrimination and judgment for
being a female in a male dominated sport.  I have had ongoing issues with
trap theft, harassment from my local conservation wardens, and backlash from
the non-trapping community on social media.  Much like Melissa Bachman’s
lion hunt, trapping foxes and coyotes would fall under the radar if it weren’t
a woman doing the deed.  On a smaller scale, I am often stopped when I’m
on the road or in a field trapping from people passing by who stop to see if
I’m lost, or if my vehicle broke down, or if I’m waiting for my husband.”
It is sad to think that in a country where women are making strides in the
hunting world, when it comes to trapping, the attacks and discrimination is
probably at its worst.

I did not realize how intense and in-depth trapping is until I
took the course and got my own license. There is so much information that each
trapper needs to know about their targeted animals.  Skye agreed,
“trappers must study literally every step that their prey takes, and must
convince an animal who spends its entire life in the woods to step perfectly on
a 3 inch piece of metal.  I think trappers are among the most
compassionate sportsmen out there, because they are doing their job FOR the
benefit of wildlife, to prevent disease and overpopulation.  If you’ve
ever seen a coyote or fox slowly dying of mange, you will think to thank a
trapper for regulating their populations so this does not happen again.

On the importance of trapping, Skye nails it, “predator management will always be an important
issue for landowners, hunters, and wildlife enthusiasts alike, and without
proper furbearer management, disease, depredation, and overpopulation
occurs.  With that said, I believe trapping will remain in our future as
long as politics stay out of the mix.  Trapping was the foundation of our
country, and continued to be an important tradition throughout the
generations.  The only way to ensure the future of trapping is to pass it
on to the younger generations, which is why every trapper should attempt to
introduce at least 1 youth to the sport each season.”

Finally, I asked Skye what advice she has for
women like me who are brand new to trapping, she laughed, “know that you will
be pretty terrible in your first season because there is so much to learn, but
that after you make a considerable amount of mistakes firsthand, you will
slowly start to outwit critters and complete catches of your own.”
Noted!  When I do set out my first trap, I will not be holding out hope for
much.  Probably a lot of trail camera photos of the animals looking at the
trap and walking off.  But, as least I will be prepared and have women
like Skye to look up to and go to for tips and advice.

← Turkeys in winter Determined to take one last draw →

What to buy the hunter on your Christmas list

Apparently, I am hard to buy for. I don't think I am but I have been told that I am by multiple people. So, here is my helpful personal list of what to buy a hunter for Christmas or Hanukkah or Festivis. 1. Books. My suggestions this year are: Meat Eater by Steven...
Read More

In the woods: moose tracks

After a good rain in the early spring months, you can usually find some great animal tracks.  Here, a yearling and cow moose ran down the edge of the road.  This is the yearlings track, its the same size as my hand!
Read More