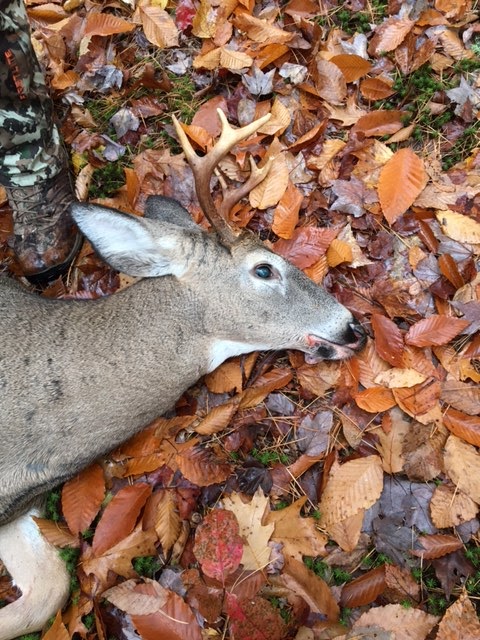 We’ve waited all year for this!  Deer season was back.  Hubs, Dad and I had a rough idea of where we were going to sit to start the morning, when and where we would move to next and the basic game plan for the morning hunt. But then, I looked at the trail camera pictures.

The 10 pointer that we had had on the camera last year had shown himself for the first time two days before at T3. Up until that point, we had only smaller bucks on the cameras.  But this one… we’ve been watching him for at least 4 years and he was beautiful.  I declared that I would start the season sitting in T3. Hubs was bumped to the Sky Condo and Dad would still hunt.

It was a perfect morning – quiet and calm.  I got into T3 and settled in.  I had a set of rattling antlers, a grunt call and a bleat.  The season officially started at 6:40am.  I was ready.  From my seat, I could watch 7 different shooting lanes. I picked up the antlers and as I prepared to rattle, a single gun shot rang out. It was close. I put the antlers down and dug my phone out of my pocket.  I sent a text to Hubs: You?

Yes. I think its the big crotch horn.

YEAH! I’m coming up. Is he down in the field?

No, he ran into the woods.

I sat in the stand and waited. He had shot a deer at 6:54 – minutes into the rifle season. This was his second deer ever. I was so excited.  But as I sat in T3, Hubs and Dad were having their own adventure.  After hearing the gun shot, Dad made his way to the Sky Condo.  He and Hubs looked for blood where the deer had been standing and didn’t see any. Dad, being the stealth hunter that he is, planned to walk parallel in the woods from where Hubs last saw the deer run in.  He jumped the deer after only a few steps and watched as the deer wobbled as he half ran over a small knoll.  Hubs stood at the Sky Condo and waited, in case the deer turned and ran back out in that direction. Dad circled further into the woods and planned to walk up the knoll that the deer had just disappeared behind.  He didn’t have to walk far when the brown body came into view.  The deer was dead.

I couldn’t take it any longer and after an hour of waiting, I packed my things up and headed to the Sky Condo.  I found the guys in the woods, dragging the deer out.  It was not the big crotch horn, but the new 6-pointer that had just started showing up on the trail camera.  His points were blunt from either fighting or rubbing when he was still in velvet.  Definitely not a bad deer to kick the season off with!

← What makes hunting in Maine so great Back into the woods →

I am afraid that I could really get addicted to fishing.  The only thing that is really stopping me are those images of fishing hooks embedded in fingers, thumbs, hands etc. and realizing that that could be me.  I shutter! But when Al took me out fishing on...
Read More

Now, I am getting excited

I know that today marks the start of bear season, but nothing get me more excited than seeing bucks on the trail cameras, especially when they are the deer that you have been after for multiple seasons!  I can not wait til opening day of rifle season.  Meat...
Read More