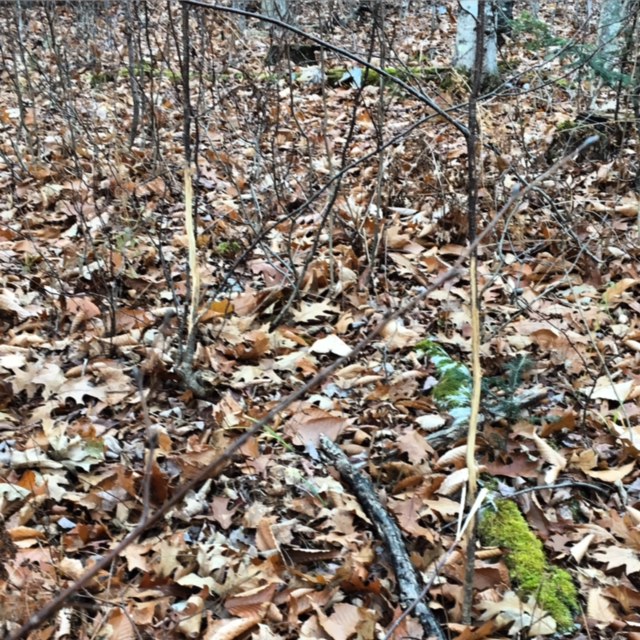 We had to revamp our hunting plan since we were now one hunter down, but Dad and I stuck with what he knew would work and where we thought the deer were.

I started the morning in the Sky Condo and when it was clear that nothing was moving through, I headed to a tree seat not far away.  There were fresh rubs along the path that I used and although they were made by small deer, it gave me hope that the deer would be moving through.

I left my pack at the bottom of the tree and climbed the 16 feet up to the seat.  I think I am more comfortable in treeseats than the bigger stands.  I can’t move when I am up there because every part of me is exposed to unseen deer but there is something about being so much more present with nature than when you are hidden in a big box.  I rested my gun on the arm rests and kept watch for movement or footsteps. 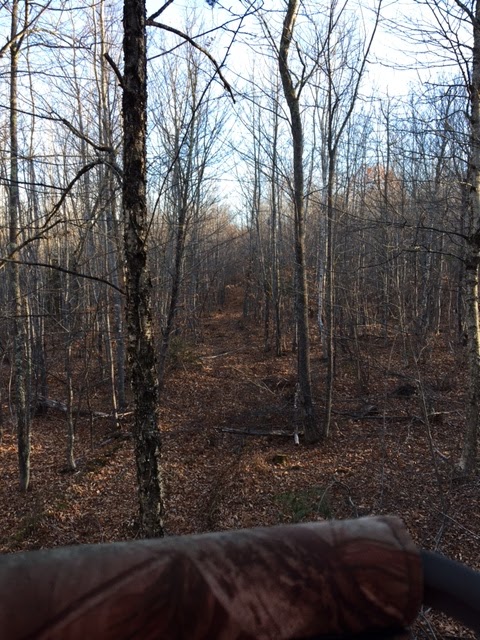 I hadn’t been there long when two brown bodies emerged from the thick hardwoods.  I twisted slightly and got my gun ready in case either of them had decent antlers.  I watched as one doe and then a second passed through my crosshairs and disappeared into the thick woods.  I turned back but left my gun in position in case there was a buck following them.

There was a squirrel rummaging through the leaves off to my right and it made me think back to when I was bear hunting and made a similar assumption. I glanced to my right and saw a deer pawing at the leaves and eating the acorns underneath. Soon, a second deer appeared. It had to have been the same two does.  They had circled in front of me and were making there way towards me.  They had no idea that I was there. I watched as they ate and could hear them crunching acorns.  The lead doe didn’t seemed worried or cautious at all. The second one was on guard; pausing to look around, licking her tongue but she was the one who came the closest to me and they ended up walking within 20 feet of my stand, completely unaware that I was sitting there watching them.

Non-hunters don’t fully understand what this sort of experience is like. If I had a doe permit, I would have easily shot either of them but it is such an amazing experience to watch these animals in their natural world, totally oblivious that they are being watched.  It is one of my favorite things about hunting!

In my new tree seat, I have seen a ton of wildlife! Does, partridge and turkeys are the norm. All have been super fun to watch. We are still waiting for Dad to get that big buck that he wants! As I was sitting in the seat on Saturday morning around 10:30am, I hear a...
Read More

Over the weekend, I finally cracked into the trailcam and got the photos of the deer off it, or at least copied/emailed to myself. Here is the deer that Dad was looking for. There is no solid, solid proof that it was taken this season, so a little piece of us is...
Read More

What I learned about being a hunting mom