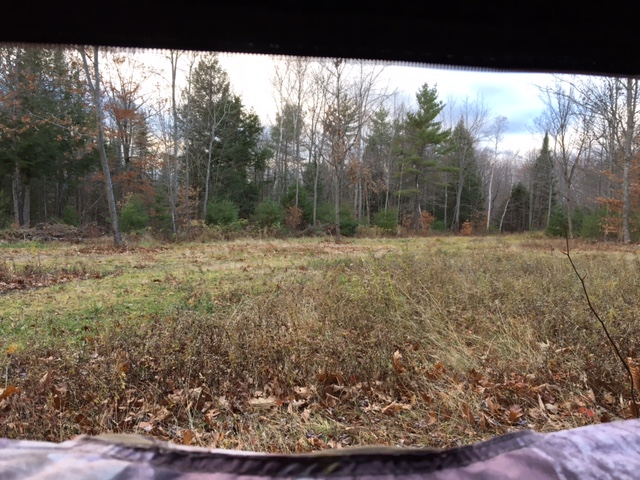 On Veteran’s Day, the wind was so bad that I climbed down from the Sky Condo to sit in the ground blind that we had not removed since turkey season.  I am usually all for rocking in the trees but there was just enough extra creeks happening that I felt better on the ground.

It sleeted, the wind blew and nothing moved.

Saturday was different.  I started off the same way as the weekend before; Sky Condo to tree seat.  I left the Sky Condo a little earlier than I had the week before hoping to see more deer than just the two does.  There were fresh rubs that were a little bigger than the ones the week before, but it wasn’t from a large buck. 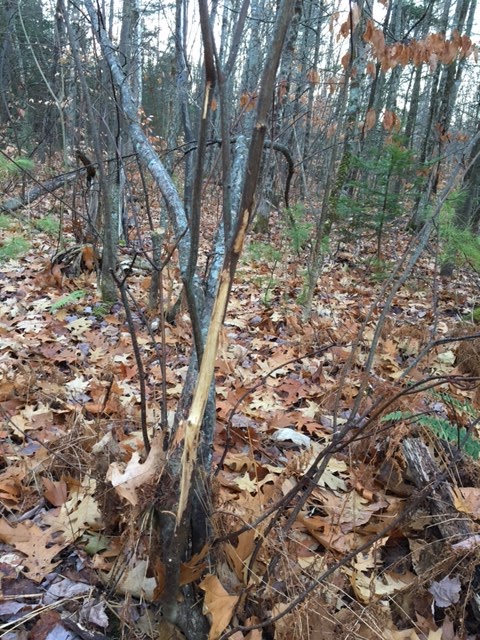 The leaves were somewhat crunchy and I took my time getting to the stand.  I was almost there when I saw two white flags flickering in the woods.  The does!  They were at my stand, eating. I was in the middle of the trail and totally exposed.  I slowly crept backward until I was up against a tree.  I couldn’t see any antlers.  The first doe spotted me, turned and bounced into the woods with her tail up but she never blew.  I had lost sight of the second deer. I peered to my right to see if I could see her around the tree that had my stand in it.  That was enough for her, she blew at me and was gone.  That tell tale sign of danger left me in the woods alone for hours until Dad came.

← Back into the woods Just shoot a doe →

If you have ever wondered what life in the Maine outdoors is like, you need to read my friend George Smith's book "A Life Lived Outdoors". It is a compilation of stories and articles that he has written over the years, so you don't need to rush through the book to get...
Read More

There is something awesome about attending Sportsman's shows. You get to be surrounded by people who care about the outdoors as much as you do. I had the opportunity to talk with some great people doing amazing things here in Maine when it comes to the outdoors. A few...
Read More