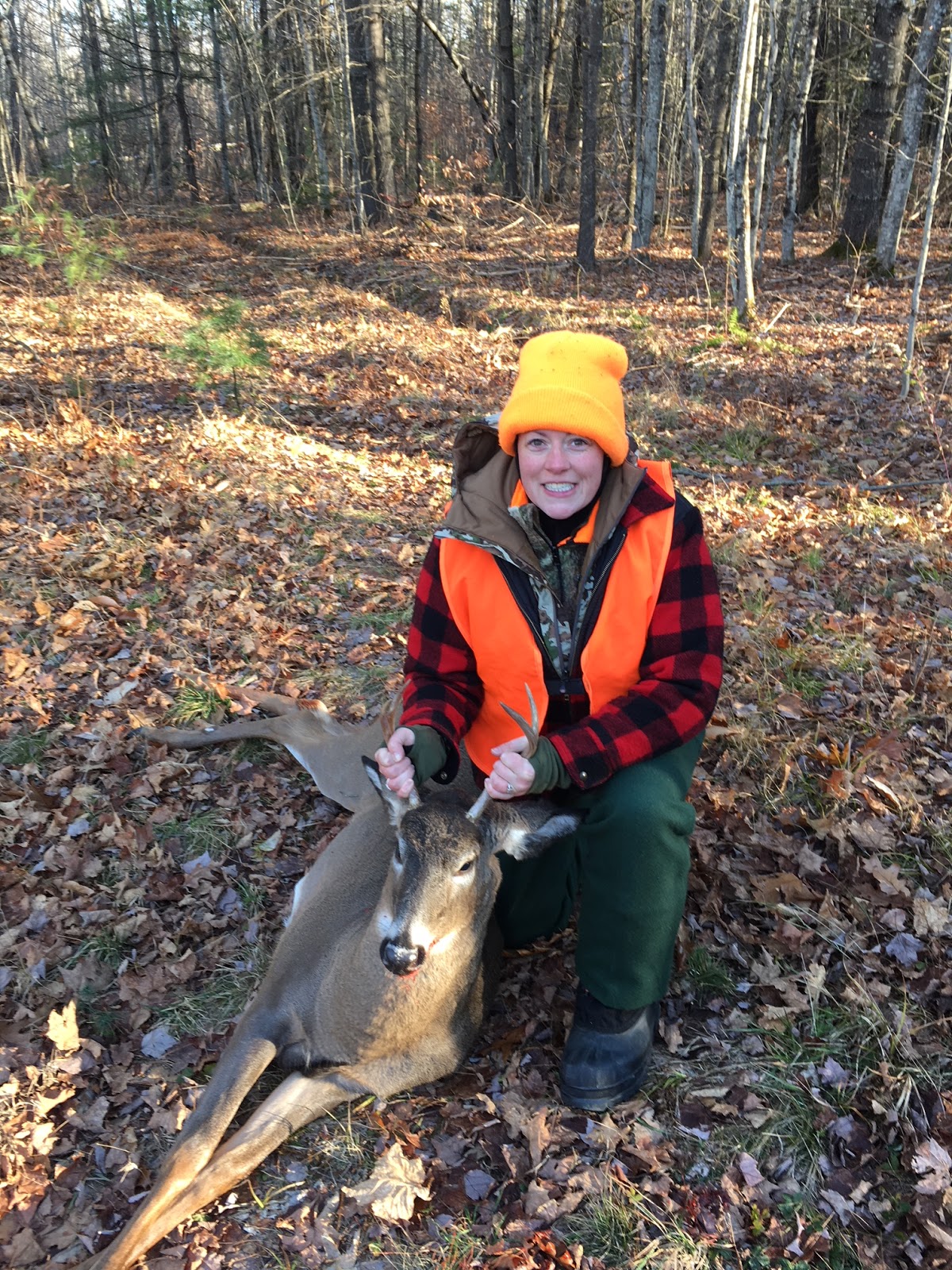 Dad assured us that deer move in the wind.  He was confident that if we were in the woods, we would see something.  He could be as confident as he needed to; he had tagged out and could stay warm. The wind was howling and with the Sky Condo breaking apart, I didn’t waste much time getting into my tree seat in the woods.  It had taken me a handful of years to be comfortable enough swaying in a tree during a windy sit, but I was ready.

It was so cold that I had on my snowmobile boots with toe warmers, my ski gloves with hand warmers and a blanket over my legs to help keep the wind from hitting the backs of my legs.  I had on so many layers!

It was too windy to hear anything move so I just kept scanning from one side to the other.  I kept hearing Dad’s voice telling us that deer move in the wind and I was reliving the shock of seeing that massive buckrun across my parent’s back yard the night before.  I was zoning out, looking straight ahead when something off to my right caught my eye; a doe!  It figured.  She was talking past me and into the thicker woods.  Dad was right.

I went back to starting straight ahead and trying to guess what time it was and when I might suspect Hubs to come get me to head inside for lunch.  I heard rustling of leaves just off to my left and assumed that it was either a brave gray squirrel or Hubs.  But when I really focused, I could see that it was brown.  Maybe the doe was circling back.

Then, I saw antlers.  Just little spikes.  Nope.  He was safe but he wasn’t alone.  Only a few steps behind him was a crotch horn.  The minute I saw him, I had two thoughts: 1. I can’t afford to get two deer heads mounted so I don’t need to wait for the big buck and 2. If Dad’s deer meat is tough, this one won’t be.

I pulled my ski glove off and put it in my lap.  They were going to be crossing right in front of me, so I got my sights lined up and watched the spike walk in and out of the cross hairs.  The crotch horn stopped behind a tree as the spike kept walking.   The second he exposed himself, I squeezed the trigger and he dropped.  I was done! Tagged out!

The wind was gusting hard enough that Hubs wasn’t sure that shot he heard was mine.  It wasn’t until I sent him a text saying that I had a deer down that he headed my way.  My phone decided it was too cold to work but I was able to shoot a quick video of how it all went down.

It wasn’t my biggest deer and it wasn’t the one that I was after, but it’s meat and it will keep us well fed.  And now the count down is on until the 2018 season!

← Of course I don't have a doe permit Love those bear cubs! →

Dad saw a lynx in this area about five years ago... so don't rule it out... is this a lynx? a bobcat? This is the first time we have had a cat on any of the trail cameras... and luckily enough, the deer did not disappear because of it.  Can you please let me know...
Read More

Wanted: An Organization that supports me!

As a 30 year-old woman, it is hard to figure out where I belong in the overall hunting world so that I am taken seriously. Women, and my demographic specifically, are the fastest growing demographic in the hunting world right now. I have been hunting for 10 years and...
Read More

No matter what animal I hunt, I always come back to deer.  Hunting predators like bear and coyote are great and I'm eager to check off turkey and moose but I plan my vacations around deer season.  After getting yelled at last season, we decided to build a...
Read More