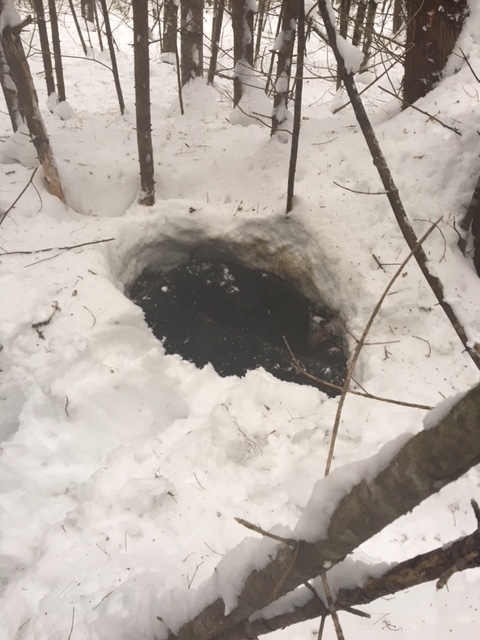 Yearlings
run.  That was the caution that Randy
Cross told Staci (MyMainelyGirlAdventures) and me as we met with the Maine bear
crew to prepare to head into the woods.
This particular den that we were going to had a 16 year old sow, who had
had four cubs with her last year when they checked her den.  There was the potential for four yearlings
plus Mama in the den.  I was a little
giddy with the idea of so many bears!

It is easy to
brag about the bear crew. Aside from their decades of experience working with
Maine’s bear population, they are a study in how team should work.  They know their strengths and weaknesses and
support one another to ensure that they have a plan and back up plans for every
den visit.  Staci and I tried not to nerd
out as we watched Randy Cross, Lisa Feener, Jake Feener and Ethan Lamb plan for
our decent into the woods.

We loaded up the
snowmobiles and began to look for an access point into the woods.  Jake took the lead and I road with Lisa as we
bounced off small trees and squeezed into narrow openings in order to get as
close as possible to the den.  We would
stop every 50 yards or so and Lisa would take a reading on the bear’s
collar.   The team used hand signals to
tell one another where they needed to go.
We parked the sleds far enough away from the den so that we wouldn’t
spook the bears.

With our
snowshoes on, Staci and I followed behind the team, watching and
listening.  What would the den look like?
Last year, this bear had denned up in an old beaver house.  The forecast called for rain and the
temperature was warm enough that large clumps of wet snow would fall on and
around us as we walked.  The team fanned
out to cover more ground and try to find the den before the bear(s) realized
that we were there and could potentially take off.  We watched as they held up fingers to
indicate how close they were.  Then, we
heard the whistle.  The sound that meant
someone had a visual on the den or in this case, the bears.

The team got into
position and through the tight cluster of trees, Staci and I tried to see what
was happening. Within a few minutes, Randy waved us over.

There, in a
ground blind, was mama bear and one female yearling. Over the course of the
past year, that bear had traveled more than 150 miles before she denned
up.  Given the size of the yearling,
Randy wondering if some of the cubs were lost along the way and she had circled
back to try and find them or if any yearlings had just denning nearby instead
of with her.

We watched as
they replaced batteries in the collars, gave the yearling, now named North, new
ear tags and tattooed her upper lip to match the numbers on her tags. Each bear
was weighed and hair samples were taken to test the overall health of the
animal. The crew effortlessly recorded all of the health information that they
needed for both bears. They were beautiful, healthy bears with thick fur and
lots of fat to keep them going throughout the winter.

We took photos
and videos and watched as the team put the bears back in their den and pick up
their gear.  We followed our trail back
out of the woods and then back to our vehicles.
The team was heading to another den in hopes of getting a few more done
before the rain came later on in the day.
Staci and I headed home, in awe of the bears and the incredible team
that Maine has keeping track of our bear population.

You can see videos and more pictures by visiting my Facebook page!

You can read Staci’s write up on our day here.

The above average temps and lack of snow this winter had resulted in the fishing season kicking off two weeks ahead of schedule so Robinand I scoped out the stream the day before we were set to go fishing to see how high the water was and how many fellow fishermen...
Read More

I have about five blogs that I need to finish and post but here is a sneak peak of one of them. I am flirting with the idea of into fishing so we headed to Grand Lake Stream to see if I could land some of the world renounced land-locked salmon there.  This is the...
Read More