Another bear, another amazing experience 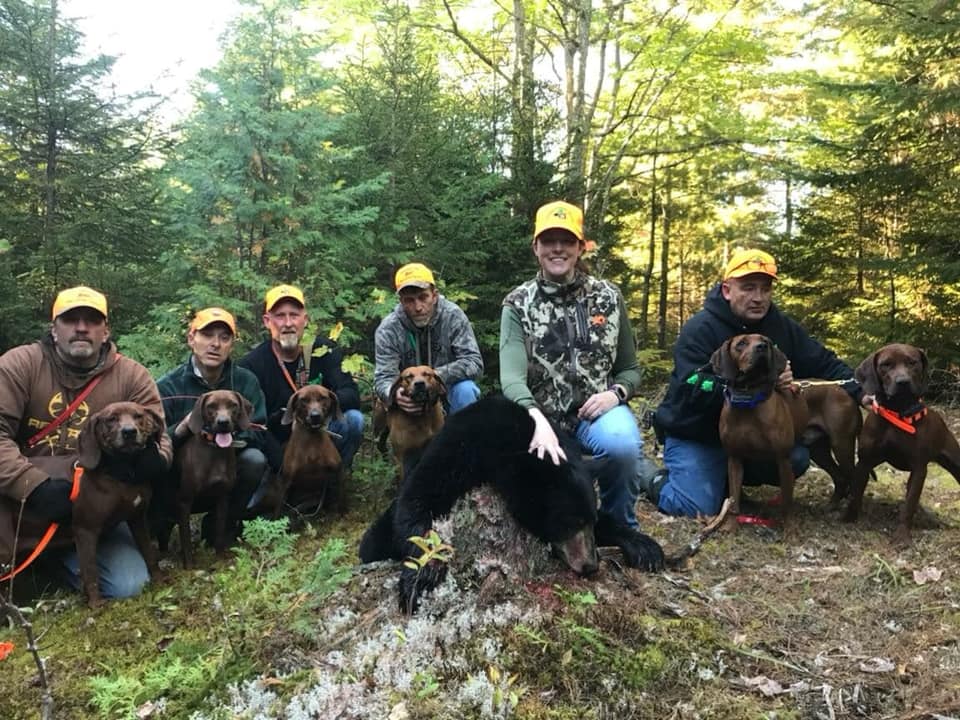 Another bear, another amazing experience

I watched the crack
in my windshield grow slightly as the heater kicked on.  It was still dark and the temperature gauge
read 27 degrees.  I took a sip of coffee
and exhaled; it was a perfect September morning to go bear hunting.

I met Bill
Dereszewski, owner of Hollaback Guide Service at the gas station in
Princeton.  We drank coffee and planned
out the day as we waited for more people to join us.  Bernie was the first to arrive.  A local retired hunter who assisted Bill, his
truck was filled with shortbreads and coffee to keep us filled as we chased
bears.  Bill Gillespie and his pup Tawny
joined the group and finally Matt Mcdonnell and a group of hunters from New
York arrived.  They had been checking
trail cameras photos sent to their phones to see which bait site had the most
recent activity.

The caravan of trucks
headed to the chosen bait site with Bill and I the lead.  I was amazed by the technology that each
truck had; large screens connected to GPS that would pinpoint where each dog
was and CBs that allowed each truck to talk and hear one another plus a
hodgepodge of radios, collars, and equipment.

The sun was coming up
over the tree tops when we turned off the dirt road onto a trail leading into
the woods.  Matt and Bill got a few dogs
out and brought them into the bait site.
They immediately started barking and took off into the thicket.  Matt reviewed the trail camera pictures and
realized that the dogs had taken off on the wrong trail. “They took the trail
he came in on,” he said shaking his head, “we can call them back.”  But he didn’t need to.  With his dog Lobo in the lead, the group came
back to the bait site and Matt pointed to the bear’s exit trail, “get ‘em” he
said and the dogs took off again.
Gillespie put Tawny into the mix and we had six Redbones chasing a bear
for me.

We listened as the
barking got further and further away and we rushed to the trucks to get back to
the road and see where the dogs were.
The chase was on and we tried to get ahead of the dogs so that we could
see the bear.  Turning on to another side
trail, Bill slammed on the breaks as we came up over a knoll so that we
wouldn’t hit the last dog in the pack.
We had just missed them.  But, we
could see the size of the bear’s paw as it ran across the road.  We needed to find this bear.  I said a little prayer that it would tree as
I did not want to worry about shooting a bayed up bear.

Returning to the dirt
road, we watched the GPS as the bear and dogs continued to run.  Then, they stopped. Someone’s voice came
across the CB “I got a ping.”  “Me too”
came another.  I looked at Bill. “When
the dogs tilt their head back, like they are looking up in the tree, they send
a different tone.  The bear is in the
tree.” My heart skipped. Once again, we left the dirt road and headed into the
woods. Bill and Matt were talking over the CB to figure out the best way to get
to the bear and dogs.

I took another deep
breath as everyone climbed out of their trucks and stretched their legs.  We were excited to see the bear but getting
there would not be easy.  I grabbed my
rifle and followed Bill through thick trees and overgrown brush.  There were puddles in the low lying
areas.  We stayed hunched over as we moved
forward and tried not to whack the person behind you with a branch.  Finally, we came to a clearing where we could
see the black mass in the tree and a few of the dogs on the ground.  Bill ushered me into a spot where I would
have the best shot possible while Matt, Gillespie, Bernie and the others helped
to tie the dogs back.

The bear was dead
before it hit the ground.

We took photos to
celebrate the hunt and this one is one of my favorite hunting photos ever. All
six dogs that helped me have a successful hunt are in the photo along with Bill
Gillespie (2nd from the left), Bill Dereszewski (3rd from
the left) and Matt Mcdonnell (next to me with two dogs).  The amount of time, energy and money that was
spent by these men prior to me squeezing the trigger far exceeds what I paid
for my Master’s degree.  They love what
they do, they love their dogs and they love to hunt.  There is no better combination if you are
looking for a guide. But be warned, as you have read in my article… once you
start bear hunting, you won’t want to stop!

← Aging a buck Opening day in the woods →

1 week from tomorrow, I will be heading up the our hunting grounds to start the 2011 season. Yeah! There are things I need to get done before the season starts. 1. Get sick. I have been mia the past couple of days because I have been really sick. CHECK 2. Get wool...
Read More

Trail cameras are addicting. You buy one, get some pictures then decide that you should have another one at a certain intersection and the next thing you know, you are like us and have almost 10 out in the woods, trying to pattern your deer. That excitement of...
Read More