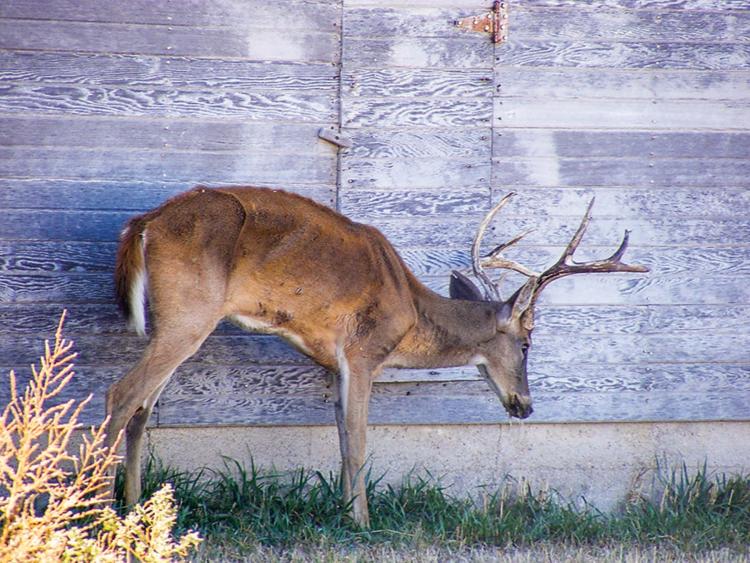 If
you had asked everyone in the room to vote right then and there, I would bet
that supplemental feeding of deer would have been made illegal. The room was
packed with people at the Augusta Civic Center, listening to a presentation by
Dr. Krysten L. Schuler, Wildlife Disease Ecologist at Cornell Wildlife Health
Lab about her research on Chronic Wasting Disease (CWD) and what is being done
in the 26 states currently impacted.

CWD
is caused by a mutated protein that are found in prions. Deer shed prions
through bodily fluids and once in the soil, CWD can stay there for months if
not years.  The worst spreaders of the
prions are those big, adult bucks that we all covet. CWD is fatal and in the
same family as Mad Cow Disease. The Centers for Disease Control describes
Chronic Wasting Disease saying, “It may take over a year before an infected animal develops symptoms, which can include drastic weight loss (wasting), stumbling, and other neurological symptoms.” It also recommends that people not consume deer that have tested positive for CWD.

Dr.
Schuler described the potential spread of CWD like this: if a deer eats or
drinks from an area that is heavily populated by other deer, the fluids can
come into contact with other deer who can also be infected.  Also, if a deer with CWD lies down and dies
in a corn field, those prions get absorbed into the soil.  A year goes by and corn grows in that same
field and gets cut.  That corn can have
CWD in it because it carries the nutrients that are in the soil.  The corn gets bought and transported to other
states or other areas of the state and then could be used to feed deer in
winter months.  A deer comes along and
eats the corn.  Then guess what…

A
recent study done by UMaine asked people across Maine about their thoughts on
deer and deer feeding.  When asked to
rank their thoughts on threats to the deer herd, 73% answered that Chronic
Wasting Disease was not really a big threat. How scary!

IF&W
currently tests a small sample of deer and moose killed every year. In episode
5 of the Fish & Game Changers podcast, Katie Yates, Public Outreach
Specialist for the Department interviews wildlife biologist Sarah Boyden. “During
hunting season, we sample specific towns for CWD.  The towns either have a big deer feeding
operation or they have a deer farm and both of those things increase the risk
of Chronic Wasting Disease” said Sarah Boyden.
When asked about deer who are infected, Boyden explained that deer “don’t
get symptomatic until the end of the disease and that’s when we start to see
them not acting right.  They are thin,
not eating, they don’t seem alarmed by anything but they can carry it for two
years, spreading it around so we are upping our sampling now to pick up any
adult roadkill.”  Since 1999, more than
9,000 deer have been tested, which equates to about 450 per year.  Maine harvests between 20-30k deer a year.

IF&W
deer biologist Nate Bieber said that the CWD response plan that the Department
is working on will go into effect when a deer tests positive in Maine.  This means that when there is a deer that is
reported as being sick, killed and then tested, something will happen.  A deer carrying CWD could be hit by a car or
shot by a hunter and no one will immediately think that it should get tested.  And that is the scary part.  We won’t necessarily know how many deer have
gotten sick if one of the deer that regularly goes to one of those supplemental
feeding stations is the one that tests positive.  One deer eating out of those corn/grain bins
could cause every deer who eats there to get sick.  Maine’s deer herd is already hurting due to
predation and our harsh winters. Well-meaning people think that they are
helping deer when they provide supplemental food sources during the winter
months but they are actually doing the opposite. One of these feeding
operations could be the cause of CWD coming in and spreading throughout not
only the deer herd, but also the moose herd.

Maine
currently has no formal regulations when it comes to supplemental feeding but
it does suggest that people not do it.  At Dr. Schuler’s presentation, someone in the
audience asked Nate Bieber about Maine’s plans to push for more restrictions on
feeding. His response was disappointing; “the state plans to continue to
maintain the current practices and monitor deer that are killed” he said.

Luckily,
there are researchers like Dr. Schuler and organizations like the National Deer
Alliance and Quality Deer Management Association that ARE closely monitoring
the spread of CWD and have suggestions on what every hunter can do to help stop
the spread of this and keep our deer herd healthy.

← Eagles on the trail Finding sheds in the Maine woods →

Working on our angles

Dad was out scouting this week. He found a bunch of scrapes and huge tracks near my tree seat. Big. He said its probably the monster we saw on the camera this summer - 8 pointer that he hopes has 20+ inch spread. No pressure or anything. So, we worked through all of...
Read More

We need to find the match

We found these out back today. Dad now wants to find the deer that matches these prints. We had to measure the best tracks to see how big it is. Dad thinks its the big deer the neighbor has been seeing, but now Dad wants to bring it home. Wish us luck tomorrow!
Read More

This weekend, Hubby got his first real hunting gun. Its a Winchester 270 with a Bushnell 9 power scope. Last year, he was hunting with a borrowed 12-guage. So, with the weather being incredibly nice, and it being DAD's bday(!!!) we headed to the back yard to start...
Read More