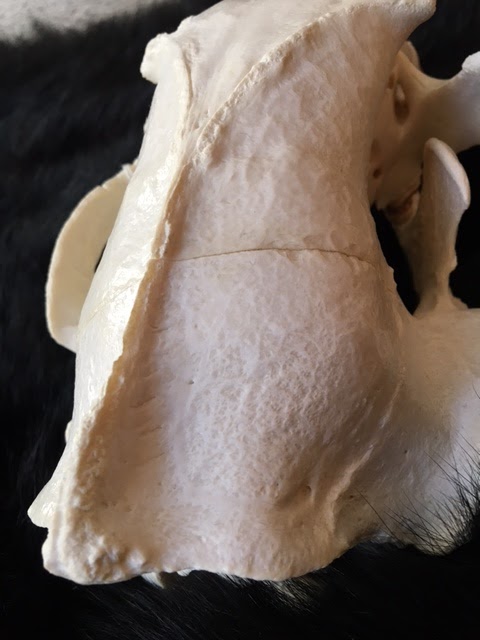 When you kill a bear in Maine, you are legally required to submit a tooth to IF&W so that the bear can be aged and logged into the records.  Each tooth is cut, like a tree, and the rings are counted. Biologists can learn about the health of the bear and it’s age. Assuming that the tooth gets to where it needs to be.

Typically, it takes a year for the data to be published.  The link to the information is usually posted all over social media and eager hunters share how old their bear was.  I couldn’t wait to find out how old this guy was. The popular vote was about 8 years old.

I sit on the Black Bear subcommittee for the Big Game Species planning process and see Jen Vashon and Randy Cross almost monthly.  So, I asked Jen about my bear’s missing tooth. I gave her my tag number, where I shot the bear and where I had tagged it.  She started diving into computer records to see what she could find.  Meanwhile, Randy asked about the skull.  After handling more than 4,000 bears in his 32+ year career, he was pretty good at aging a bear by its skull and teeth.

I quickly pulled up these pictures and asked him what he thought.  I explained that most people who looked at the bear thought that he was 8.   He laughed, “It was more than 400 pounds… no way is that bear eight years old.”

Randy started talking about the characteristics that stand out on a skull.  First: the teeth.  Since my skull had been cut several times, in order for the skull to be put back together, it had to be glued and is now one piece and not two.  Randy could guess by looking at the picture of the teeth but it wasn’t totally clear and no pictures showed the inside ware of the bottom teeth.

The top of the skull though was a different story: The crest was big, height-wise and length-wise. It ran along the entire top of the skull.  Randy explained that you only see that in old bears and you can age them based on how big that ridge is.

Another telling characteristic is how smooth the bone is.  In the second picture, you can see that my bear’s skull is not smooth but bumpy and porous looking. That is another sign of an old bear.  As bears age, so do their bones and they begin to break down.  Young bears have very smooth skulls but the older ones… you can see where the bones are starting to separate.

From the photos that I showed Randy and his decades of knowledge (he has more years of experience than ANY bear biologist in North America) he estimated that at the very least, my bear was 12-15 years old. At least.

Jen returned with a piece of paper in her hand.  There were 7 bears tagged at the station that I tagged my bear in. Only two of them were aged (via teeth) but I was listed in the kill log, so my info and tag were in the system. There was a chance that since I shot my bear late in the season, it was sent in late or sent in with the 2015 bears and could turn up at some point.

Or, the dope who registered my bear didn’t send in the tooth.

I was fortunate enough to have Randy and Jen help me figure out the age of this bear. The lost tooth just adds to the incredible story and issues that I have had with this bear since that second when I squeezed the trigger.

← To hunt a huge buck, you need to think like one Spring turkey distraction →

We spent a few hours in the woods last weekend and I came across this pile of scat on the side of an old log.  It almost looked like the mystery critter could sit on the log and use it as a toilet seat. Who left this behind? It looks like turkey poop but there is...
Read More

There are a few less turkeys in Maine to hunt this year. A few months ago, Maine Inland Fisheries & Wildlife in partnership with the National Wild Turkey Federation, captured and released more than 50 birds into East Texas with the hope of rebuilding their population.