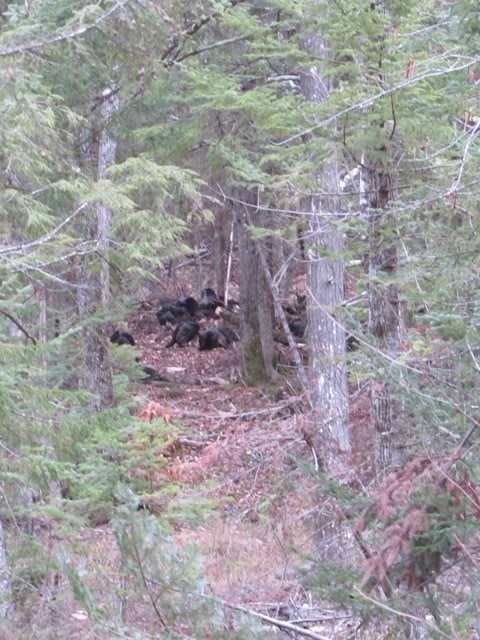 About an hour into my sit, I heard steps coming towards my stand.  It was a beautiful morning and my heart skipped a beat with the idea that a deer might finally be headed my way.  Trail camera photos showed my last remaining target buck during daylight at that stand, so I was hopeful. But as it got closer, I heard purrs, clucks and chirps. The steps turned into one big mass of noise and soon, like a movie, the woods were nothing by black blobs moving towards me.

They set up in a shooting lane, eating acorns and moving closer, essentially blocking me in my stand.  The flock would see me move and spook before I would have a chance to move my gun into a position to get a deer.  I was stuck and they were coming closer. 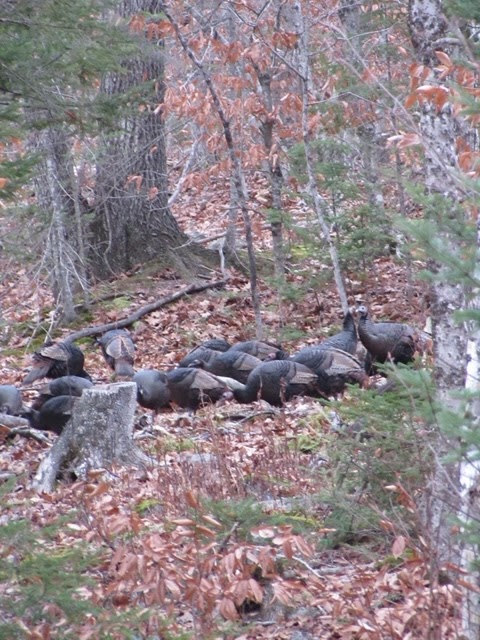 When they got bored there, they moved across three more shooting lanes and I counted them as they passed… 42. I was hearing leaves crunch everywhere around me.  But something sounded too close to be a rogue turkey.  I slowly turned to my right and saw a spike horn walking in the direction of the turkeys.  They had successfully blended their leaf crunching with his so I didn’t know he was there until he was almost in front of my stand.

I had no intention of shooting him so I didn’t pick up my gun but agreeing with my assessment, the buck saw the turkeys and turned and headed in the opposite direction.

Another half-hour passed and finally, they left (to go visit Dad in the other stand.)  I sat and enjoyed the day.  Birds and squirrels were busy storing food for winter.  Soon, it was 4 pm and time was ticking down.  I continued to scan the trails for movement.

Suddenly, to my right, I caught the sight of the back half of a deer headed in my direction.  I swung my gun across my body and aimed down the next available shooting lane.  My mind raced:

It will be dark when you are hauling this deer out of the woods.

What if it runs further into the woods and the coyotes come?

But if it’s that big buck, it will be worth it.

I calmed my breathing and waited.  I just needed it to step into the shooting lane to see what I was dealing with. I had a doe tag in my pocket. But nothing moved. The deer must have swung back towards the stream and out of my view.  It was a great way to end the day-long sit.

When I met up with Dad, he reported that all he had seen were the turkeys. All of these deer seem to be on lockdown and we can not find even a doe roaming the woods.  Well, we can but they show up on my phone every night between 10 pm and 4 am.

Next weekend is the last weekend of rifle season… it’s getting down to the wire!

I convinced Dad to put the trail camera back out at the Sky Condo to see what deer are around and made it through the winter... and it was like seeing old friends. Five healthy looking deer! Last year's fawns look good as yearlings If you zoom in, you can see antlers...
Read More

When some blogs just talked about opening day of fishing season, Robin Follette and I LIVED it! I drove four hours north the day before to hang out with Robin and go on a few adventures (those posts are coming, but here is a sneak peek).  The biggest was to stand...
Read More