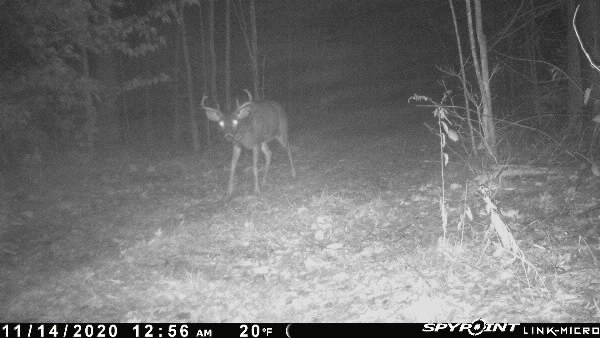 My trail camera sent me a picture of a big, wide 6 pointer that was in the area where I was headed.  I wondered how far he might have traveled between then and when I would be in the woods.

It was an off morning.  My son wanted to hunt but was complaining about his extra layers of clothing and how tight it made his boots.  I had on 3 of my 5 layers (remember, I sit for hours and hours!) and was rushing to get him out of the door along with packing all of my stuff.  I knew as soon as I walked outside that I was in trouble.  I was sweaty. 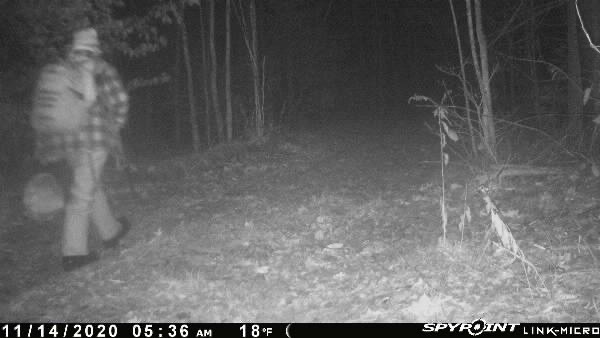 I walked to the same stand as I had sat in last week and again, I jumped a deer.  It was dark and I tried to listen to figure out how far and in which direction the deer was moving. When I reached the stand, the rungs were icy from the rain the night before and the chilly temps.  I carefully climbed up and listened.  The wind was rustling the dead leaves in the trees.  As the sun came up, drops of frost melted and added to the noise.  Squirrels took up their usual job of sounding like deer.

I watched every shooting lane I could, to see if I could catch something moving.  I inched my way into the corner of the stand to block the wind on my back. Every half hour, I swore that I was listening to a deer coming closer.  The bushy, twitchy tail of a gray squirrel would appear and my nerves would calm.

As it approached noon, I heard another rustling in the leaves.  It was quieter than the others.  I turned just in time to see a coyote run across the shooting lane.  It was the same one I had on my trail cameras – he has a black tipped tail.  I tried to call him back and watched every shooting lane so that if he turned left, I could make a shot.  He was gone.

The afternoon wore on and I watched about 40 turkey rush across the end of the shooting lane.  They were in a hurry and I wondered if the coyote had circled around them. Or if a deer had jumped them.  I watched and waited but there were no deer around.

I trudged back out of the woods at dark. Week three of rifle season was over and I was not having much success even seeing deer.

That night, at 6:21pm my trail camera sent me more photos. At some point, these deer are going to have to come out in the daylight, right?

To view more articles I have written on whitetail deer, click here.

The right to hunt and be safe

With the Maine legislature beginning and as always there will be hunting and fishing issues that come up, I wrote this article for The Liberty Project about a bill in Wisconsin that would prevent anti-hunters from documenting hunters when they are in the woods....
Read More

Last weekend, the hubby, pup and I headed to Sandy Mountain Cabins in Jackman. We were excited and eager to test out the fishing pole. It was beautiful when we arrived on Friday! The camp we were in was unlocked and ready for us. Corey, the owner had left a note in...
Read More

Over the weekend, I finally cracked into the trailcam and got the photos of the deer off it, or at least copied/emailed to myself. Here is the deer that Dad was looking for. There is no solid, solid proof that it was taken this season, so a little piece of us is...
Read More