I sprayed my clothes with permethrin and packed my bag.  Staci and I planned a day in the fields hoping to get a shot at a tom or two.  We hadn’t been out on an adventures in a while and we needed it.

I had turkeys on my trail cameras coming through a certain trail every morning. Staci’s husband had seen a flock of them in a field near her home.  We made a plan to start there and then head over to the Sky Condo. 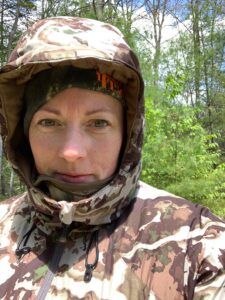 Sweating but not worried about bugs

For May, it was hot and buggy.  Temps were going to be in the upper 70s.  I had to think about what was worst; sweating while walking, scouting and wearing all of my hunting clothes or black fly bites, ticks and any other crawly critter.  I drank a lot of water and looked like a camo-clad Marshmallow Man.

In the woods & fields

Staci and I crept into the field with the hot sun beating on our backs.  She tried a few different calls.  Nothing.  We walked on and kept an eye on the edges of the field and the knoll that we were approaching.  No movement and no answers.  We got settled along a rock wall and continued calling. There was a slight breeze that helped to keep us from overheating.

We headed to the other side of the property and walked down an old skidder trail.  We froze when we got to the top of the hill. Is that a turkey? It was shiny like the back of a turkey can be in the sun. Was it moving? Could it see us? Is there more than one? My shotgun was loaded so I could make the shot if they walked towards us.

Staci moved to the tree line so she was out of sight. I was in the middle of the trail, unable to move in case we were looking at a few turkeys in the trail.  We called again but didn’t hear anything.  We didn’t dare move.  I strained my eyes trying to determine if what I was looking at was moving on its own or if it was vegetation moving with the wind.  I wished that I had thrown my binocs in my pocket.

At the Sky Condo 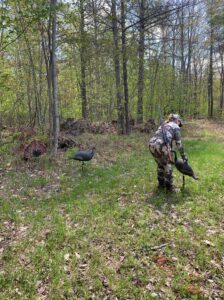 We ended our standoff and headed to the Sky Condo to see if we could catch my flock traveling between the fields. My trail camera had not sent any photos so I was hopeful that we could catch them or at least have them answer our calls.

We avoided the field incase they were at the far end and started to call.  Hearing nothing, Staci set up the decoys and we settled into the woods – almost in the exact spot where I had shot my deer last fall.  The wind was starting to pick up and it was hard to hear if a turkey was answering our calls.  We called and waited.  Called and waited.  After a while, we decided that nothing was around.

Crawling out of our hiding spots, we made a slow walk to a nearby field. It was silent. We decided to call it a day.  The turkeys had won. Heading back to the car, we saw our only evidence that we were in the same area as a turkey: a feather.

Spring turkey season ends on Saturday.  If I am drawn for a moose permit, I will have to be dedicated this fall so that I can tag one of these birds in my attempt for a grand slam.

My friend Staci and I went fishing recently.  The water was down, the air wasn't too hot and the fish were jumping! It was the third time we had attempted to fish this spot and we arrived early enough to be the first in. We had the luxury of being able to enjoy...
Read More

Trail cameras are addicting. You buy one, get some pictures then decide that you should have another one at a certain intersection and the next thing you know, you are like us and have almost 10 out in the woods, trying to pattern your deer. That excitement of...
Read More

What it means to lose a deer

It was horrible. I remember the noise she made when she dropped. How she spun on the ground trying to get back up. I can remember pretty much everything about that 2pm sunny, Saturday afternoon in November. I remember her finally getting back up and thinking she would...
Read More