It was an emotional rollercoaster of a season.  All I wanted was an eight point buck.  I will save the story for another time, but it didn’t happen. But what did happen changed my whole perspective on deer hunting. After twenty years of hunting, I am done shooting small bucks.

I shot my doe in the first hour of rifle season, so having the ability to shoot a doe AND a buck gave me the opportunity to keep hunting and looking for that big buck.  I could sit and watch more of the does and fawns at different spots on the property.  One morning, I watched a fisher running around my stand.  I enjoyed being in the woods, knowing that I had a specific buck that I was after and that I had already put meat in the freezer.

This season was more of a chess game.  I had cameras up at different spots on our property and only a couple small bucks were showing up during daylight. I began factoring in hunting pressure, frequently used trails and if there were patterns to the buck’s behavior throughout the season.  I usually go a little crazy during hunting season and obsessing about what deer are on the property but this brought it to a whole new level. 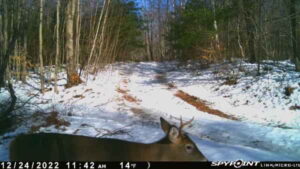 I learned more about the buck and the herd’s patterns overall.  I canvased some new property and found new spots for cameras.  Instead of focusing on shooting any buck, I had to up my game and think more holistically about what and where the deer would be and why.

I laid my eyes on the target buck.  It took me twenty years to see a deer like that and it might take me another twenty but I will take my chances. That encounter gave me a whole new appreciation for large, mature deer.  It made me realize that I am done shooting small bucks.  I still get excited when I see them walking by a trail camera and I know my heart will speed up when I see them while in the woods.  But I won’t shoot them.

My mindset around hunting the property is now about overall health and management.  I will prioritize shooting a doe over a small buck.  The less does around, the more the bucks will have to move during the rut.  And we have too many does on our property and throughout the state.  I will be happy from now on watching the small spikes and crotch horns walk by.

The countdown to deer season has begun…

← This is why my land is posted

I recently discovered this wonderful blog by Willard. His post today made my stomach turn. Not because of the photos - those are amazing - but because of what the photos are of; deer killed for their antlers and tenderloins. Here is the actual blog post. The whole...
Read More

Moose on the loose

Every spring when the cows kick their yearlings out of their comfort zone, there are news reports of them showing up in the wrong places.  This spring, it was near the kid's school.  Friends had posted pictures of the moose but it wasn't until I took the...
Read More

My 10-pointer shot on Nov 25th 2011. The closer we get to November, the more I am concerned about what life will be like for my beloved White-tailed deer.  In 2007-2008, we had a harsh winter with a lot of snow followed by massive flooding in the northern part of...
Read More