If any of you want to read this book, I will gladly send you my copy. Normally, I can stomach my way through a bad book. In this case, I found myself arguing with what was being written. I hated the fact that she never did any real hunting, but instead always seemed to be on a preserve that allowed her to pick and choose what she shot. No deer to shoot, not a problem, shoot the 5 wild pigs that are nearby.

She never shoots a deer (or any other large animal) in this book She spends maybe 8 pages talking about deer, but a lot of that is while she and the guide drinking diet coke, eating and drinking in their deer stand. 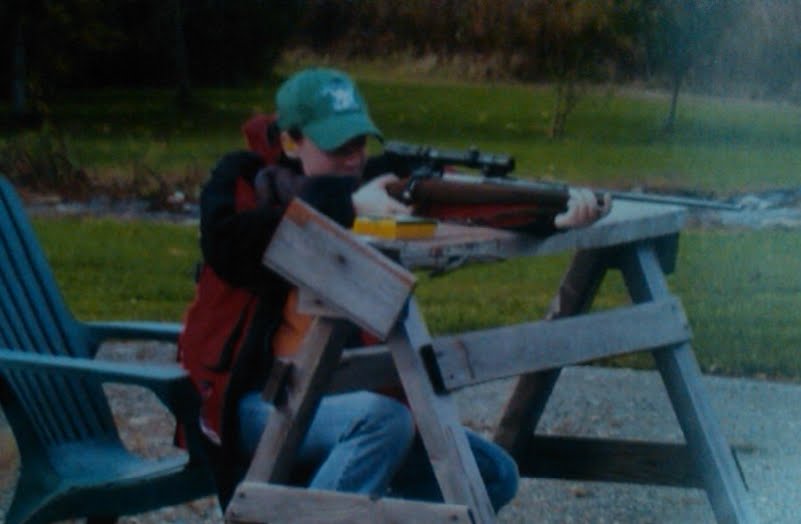 The intro to this book (at least what I read on Amazon) was the only interesting part – the suspense of shooting a turkey and the excitement that comes from waiting to pull the trigger and getting your kill. That was the only good part of the book. Another SUPER annoying thing that I found was her use of “slapping the trigger”. She uses a shot gun for most of the book (since she is bird hunting) and I have shot a shotgun but I can promise you that I have never slapped the trigger nor have I ever heard that expression used — is it a term not used in the Northeast? I pull every trigger, not slap it. As a result, I cringed every time she used that expression. This photo is proof that, even the first time I shot this gun, I pulled the trigger, not slapped it!

Overall, it was a dumbed down, ‘girly’ version of hunting. I checked out Georgia Pellegrini’s website and twitter feed. It basically confirms the gender stereotypes that women and book hunting should not be taken seriously. In the trailer for this (yes, someone wants to make this a tv show), Georgia giggles, shoots into the air, bats her eyelashes and says something about being a girl and hunting. Almost every shot is of her, modeling with her gun in poses that you would NEVER see men in if they were advertising a hunting show.

It has spurred something inside of me that will lead to more blog posts and look at how society views women, hunting and sexualizes it and in doing so, ruins the serious credibility of women hunters.

← Guns and Yoga? Finish the sentence: →

When we pulled the memory card a week or so ago, we saw this picture.  Nothing before and nothing after, just this one glimpse in time.  I posted it on my Facebook page and got some great comments about what it could be.  What are your thoughts?
Read More

I had called Dad mid-week to check in and he told me that we had a big buck by the Sky CondoOne of the 8's? I eagerly asked No. Bigger If I could have driven up that night, I would have.  But I had to wait until Friday to put the memory cards into the computer...
Read More

This is what is coming our way - 8-12 inches of snow. Tonight into tomorrow. I am trying to focus at work, but really, its not working. Dad and I have been doing snow dances all season to get some snow to fall so we can track this damn deer that keeps mocking us and...
Read More