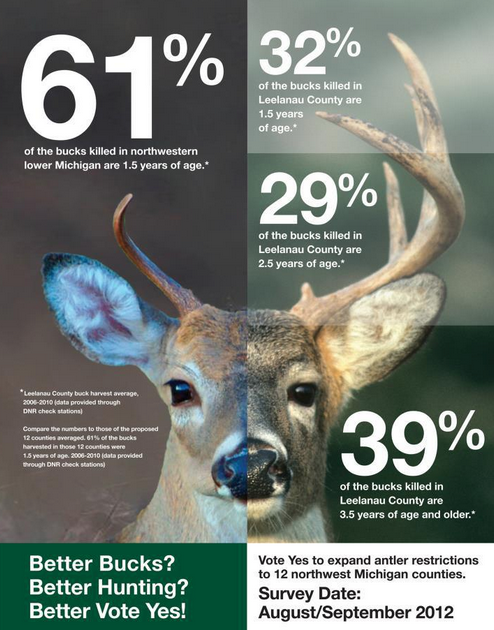 Recently, I have been doing some research on this topic and asking my friends on Twitter if they have restrictions like this where they hunt. If so, do they think it is an effective method for growing and creating a healthy herd.

Here are some of the comments:

Kentucky – No but if it’s less than 3 inches, u can check as doe if I remember the regs correctly. Never been as issue for the guys I hunt with.

Idaho – No, we don’t have any restrictions like this.

Georgia – Ga. allows counties to set antler if they desire and those that have service pt. and/or restrictions have much better bucks ! Point & spread restrictions are best. Erin, there are only a couple of Counties that i know of. I’m sure there are some i don’t know. Dooly County has min. 8 pt. & 15″ spread. It has made an incredible difference in their herd but is difficult to bring in more areas because we have more killers than trophy hunters.

Oklahoma – No. There are no antler restrictions like “must be 3×3 to shoot”. I think it would do a lot to help there be more mature deer on public land if there was a restriction. Private land hunters hold themselves to their own standards where I would never take less than a 3×3 due to maturity others might.

Missouri – The APRs have definitely increased the number of quality bucks in some areas, but I can also understand why the APRs frustrate some hunters.

Tennessee – Not here in Tn. It’s still important law or not to harvest appropriately to ensure future game

This interactive map shows the deer population per square mile across the United States. I don’t know about other States but it looks pretty true for Maine. In the winter of 2007-2008, the northern part of the State received more than 15 feet of snow and had severe flooding that wiped out towns along the Big Black, St. John, Allagash, Fish, and Aroostook Rivers. As a result, the deer were incredibly vulnerable to coyotes and had a harsh winter of dealing with the lack of food and habitat in the area.

Since then, there has been significant efforts made to rebuild the population across the central, western and northern parts of the State. Last season, we harvested 18,839 deer in Maine which is about average. But, the herd is still small and being threatened by the booming coyote population.

So, here is my question:

If you are not in Maine: Are there restrictions where you hunt and are they effective?

If you are in Maine: Do you think this would help us rebuild our herd?

You do "funny" things when you are a hunter. You willingly wake up at 4am.  You willingly spend hours tracking, sitting and walking and you willingly sit out in 0 degree weather waiting for an animal (coyote) in my case.  Some mornings, it is fun to document...
Read More

I have been saving all of the 'good' trail camera pictures over the years partially because it is fun to see the animals that were around but also because it is a reference check for what the norm is for our area. We have not had a lot of bucks on the trail cameras...
Read More