Working to restore the fish of the Penobscot 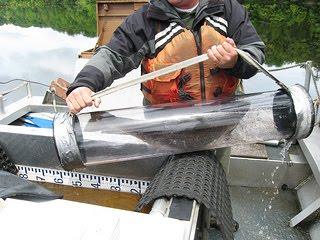 Working to restore the fish of the Penobscot

The following is a news story that aired yesterday about the removal of one of two dams along the Penobscot river and the impact that it will have on the fish population. For audio and original publication, please click here.

There are “high hopes” for the Penobscot River once the Great Works Dam is completely removed, and dismantling of the Veazie Dam begins next year. That’s how Maine Marine Resources Commissioner Pat Keliher framed his remarks at a celebration along the river’s banks today. Restoring 11 species of migratory fish is a big part of the dream. Hopeful signs are evident at the Veazie Dam fish trap operated by state biologists every spring and summer. But, there’s still a long way to go.

For endangered Atlantic salmon, whose mysterious, powerful instinct propels them hundreds of miles from their native rivers to ocean feeding grounds and back again to reproduce, the Penobscot River is a force to be reckoned with all its own. Currently, salmon face a gauntlet of four dams just to get to their historic spawning grounds.

Once the Great Works Dam and the Veazie Dam are removed, and a fish bypass is constructed around the Howland Dam by the end of 2014, the fish will face just one big hurdle: the Milford Dam–and by then it will have a fish elevator to help them along their way.

For now, salmon and other migratory fish who are pushing upstream, are caught here at the fish trap on the Veazie Dam, the lowest dam on the Penobscot River.

Mitch Simpson is a biologist with the Department of Marine Resources. “They come up the fishway. We trap in a trap. We release everything else into the river except for the salmon,” Simpson says. “The salmon we take back in this barge, and 650 of them go to the hatchery and the rest of ’em get trucked upstream.”

Simpson is standing on a small, powerful barge tethered, for safety reasons, to a cable that runs across the top of the Veazie Dam before the water spills over the edge. Every spring and summer, from the first of May until the end of October, he and other biologists make twice-daily trips across the dam to gather up salmon that are caught in the trap in the middle of the Penobscot River. 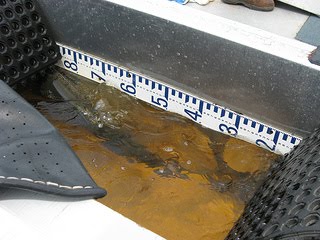 “And we do take biological information like length, the sex, we take a genetic sample,” Simpson says. “Some of them we take scales from to get age and origin, and injuries or anything that we notice on the fish.”

June is usually the busiest month of the season, with as many as 70 salmon caught a day. The numbers drop off dramatically as the weather heats up. Last year was a big year–more than 3,100 salmon caught. Simpson says that’s one of the best counts since the trap was installed in 1978.

So far this year the numbers are off. Biologists aren’t sure why. It could have something to do with heavy rainfall. It could be something else. The numbers are still better than the lowest count of 524 fish about a dozen years ago. 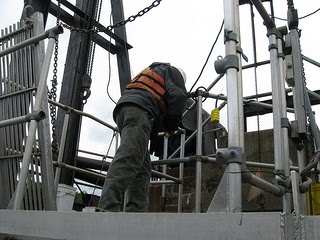 Still, 95 percent of these salmon are hatchery fish–fish that are raised in the Orland hatchery about 50 miles away. But with or without the hatchery’s help, the move to recover migratory fish such as salmon, sturgeon, shad and alewives on the river is something the Penobscot Indian Nation has been trying to do since the dams were constructed two centuries ago.

“Tribal members used to spear and net salmon by the tens of thousands when they came in the spring,” says John Banks, the natural resources director for the Penobscot Nation. “You know, we have records of tribal officials going to Augusta around the turn of the century to complain to state officials about the lack of fish, and the impacts on our fisheries,” he says. “You know, and that’s after a 10,000-year history of using this river to meet all of our needs as the first stewards of this area.”

Banks says back then the complaints fell on deaf ears. But this is a new era for the Penobscot and for that Banks is grateful. Now state and federal officials have hopes not only of reviving salmon populations, but other fish as well. Marine Resources Commissioner Pat Kelliher says one needs only to look at what happened to alewives in the Kennebec after the Edwards Dam was demolished in 1999.

“I fully expect our migratory fisheries numbers to increase remarkably on the Penobscot, as we have seen on the Kennebec,” he said. “The alewive run this year on the Kennebec will exceed over three million fish. And it is so robust now that there is a commercial fishery for the first time in generations.”

Keliher says the alewives provide bait for Maine’s $300-million lobster fishery. And he thinks they have even more potential in the Penobscot, with its large swaths of undeveloped territory above the Great Works Dam–and where his department has just finished stocking more than 50,000 alewives, so when both the dams are removed, adult herring will be ready to return to their natal waters and spawn for the first time.

Another article about the dam removal:

It's that time of year when deer are yarded up and surviving the harsh winter weather.  I've been fortunate enough to see lots of healthy looking deer while walking through the woods.  In talking with friends about the deer herd in their area, they have mentioned that...
Read More

We kicked off the new season on Saturday and it could not have been a better morning.  The moon was out, the stars were bright and there was just a slight chill in the air.  It was 24 degrees. After last year's last minute switch in sitting spots and my...
Read More

The temp was 102 at 3 o'clock in the afternoon.  Yes, 102.  Dad and I were melting but we had put this off for way too long. Here is was July and our trail cameras were not up and because they weren't, we were not seeing what sort of animals are around our...
Read More