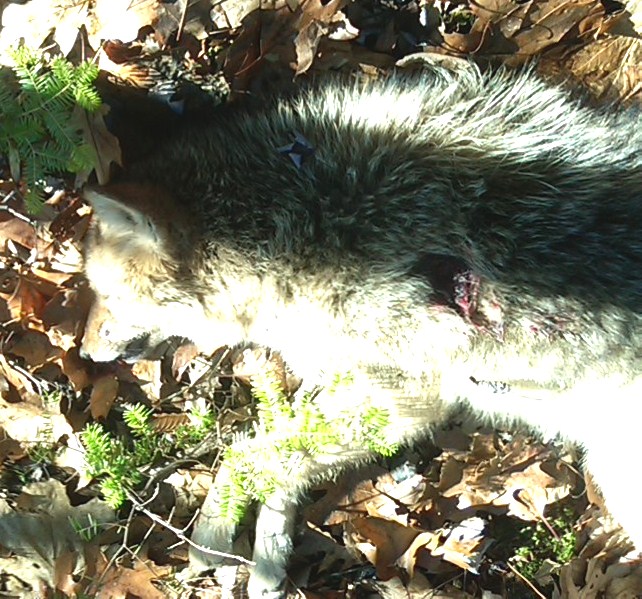 In my new tree seat, I have seen a ton of wildlife! Does, partridge and turkeys are the norm. All have been super fun to watch. We are still waiting for Dad to get that big buck that he wants!

As I was sitting in the seat on Saturday morning around 10:30am, I hear a shot. Its close because it makes me jump. From where I know Dad was going, it could be him!! I pull out my cell phone waiting for the call to confirm. 5 minutes, 10 minutes, 20 minutes go by. All I can think then is that Dad jumped a deer towards another ground blind that must have had someone in it. As I sit there, I see a movement coming from my right.

It looks like a fluffy dog. It is about 30 feet from me trotting along a broken down tree then turns and heads towards my left. My the time I realize that it is a big coyote, he has ducked under some downed trees and I can just see his feet. I sit there almost in shock. Not only have I never seen a coyote in the wild, but this one was close and out and about at 11am. Clearly I did not have my whits about me, as I let him go past me without even raising my gun.

I hear a snap and see Dad walking towards me. I wait til he gets to the bottom of the stand.

“Was that your shot?”

When I told him I saw one, he laughed and asked why I didn’t shoot it. Clearly, this is another example of why I hunt from trees; I am not fast thinking! I think in this case, I was so shocked to see the coyote that by the time my mind realized I needed to shoot it, he was gone. Dad took me to see the coyote that he shot (because I am like that and want to see dead animals).

Dad said he heard a snap and saw the two of them. The big one took off and the small one didnt know what to do so she ran behind a tree. All he could see was her tail. She turned around and he could see her head and chest. And shot. It was a small female. I would guess that she was either the mate of or daughter of the one I saw. I know coyotes are dog sides and I have a dog that is 50lbs, but I would say the the one that trotted past me was probably twice the size of this one. So now, as I go back into the woods for a final weekend, I have a new enemy that I am after!

This past week, Inland Fisheries and Wildlife released the numbers for the 2011 deer season. It is a perfect pick up point for the rest of my interview with Chandler Woodcock, Commissioner of IFW. How were the deer & moose numbers compared to 2010? Overall, about...
Read More

A few weeks ago, I got my hands on an Op-Ed piece in the New York Times (thank you Steel!) that talked about the need for armed guards to protect the poaching of wildlife throughout the world, specifically in parts of Asia and Africa. The author, Elizabeth Bennett...
Read More