What a dead moose can tell you 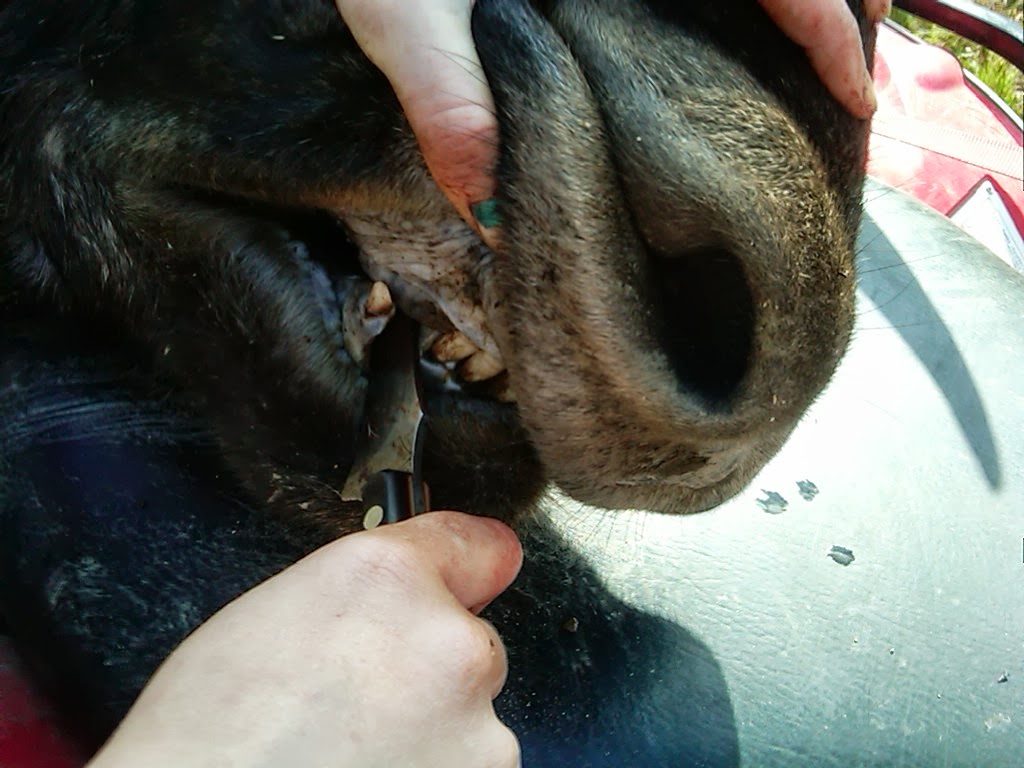 What a dead moose can tell you

Three years ago, Dad and I headed into the woods to get a moose. I took a week off from work and we were rocked and ready. Zone 17. In hindsight, I can see why Rick wanted to trade permits for that zone. Throughout the week, we saw one dead moose and a spot where one was gutted. That was it. It was the second time Dad had been drawn and the first time he didn’t come home with some meat.

At the start of the 2012 moose season, it was projected that 75,000 moose were roaming the woods. In my interview with Commissioner Woodcock, he spoke about the changes that were taking place this season that would allow more people to get their permit who had not.

This past fall, my brother in law (BIL) who is a biologist for the State of Maine was gracious enough to let me tag along to see what he does and why it is important to the overall health of the moose herd in Maine. We headed to a tagging moose station in Roxbury, Maine for the October hunt.

Maine biologists play a key role each hunting season as they gather information at tagging stations. Their goal is to get a biological make up of the health and wellness of the herd in the area. Their findings impact the number of permits that are allotted to each zone throughout the State.  Roxbury is in Zone 12 where 35 bull and 20 cow permits were issued, which was the same as the year before.

Before we started inspecting moose, I asked BIL some questions: 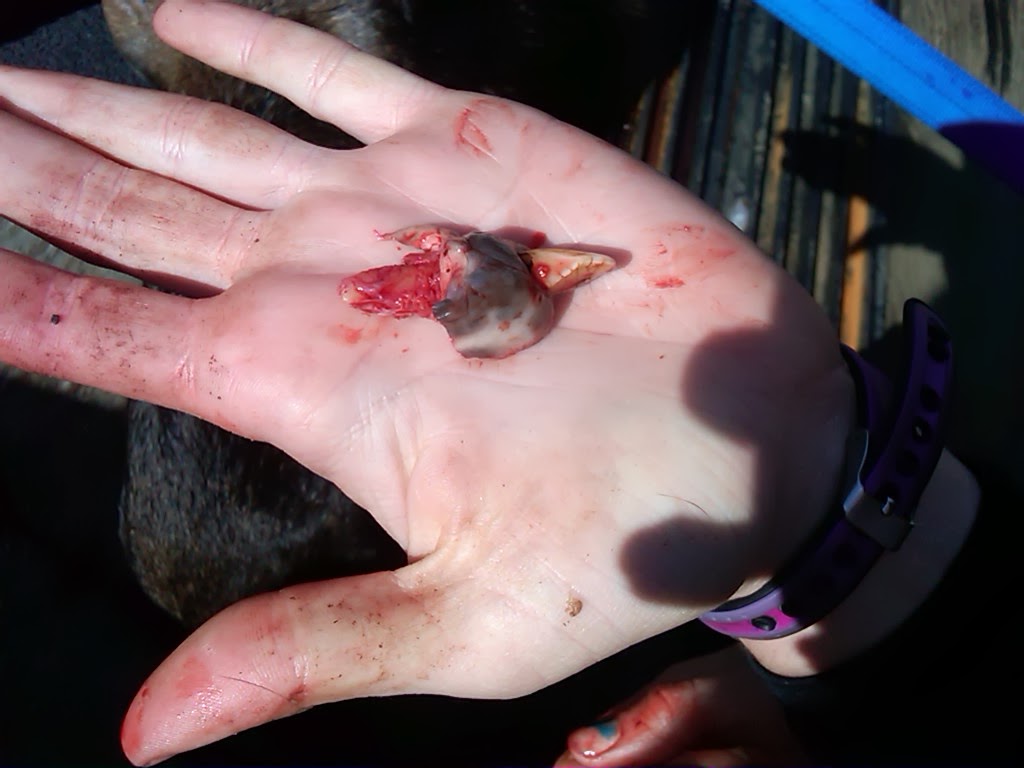 Q: Is there one certain tooth that you always pull? What can you tell by looking at the tooth?

We always take a canine tooth. We ask each hunter if they mind that we take a tooth, then we can get the age from the tooth.

Q: What information do you take from each moose? what do you do with the info?

We won’t take blood, but we do some tick sampling (count the number of ticks within a certain area). We look at antler type and size. Basically, everything we collect is used to determine the number and type of permits for the future, because it gives us an idea of what the population is like.

Q: I also heard a rumor that people who got cow permits for the September season were asked to bring the reproductive organs to the tagging stations to be studied. True?

The November hunt has been around for just a few years. We started taking reproductive tracts last year. The breeding season is going on now, so by the November season we can tell if the cow is pregnant or not; we can’t tell in the Sept/Oct season because it’s too early or they simply may not have bred yet.   In doing some more research about this, I came across a how-to video by Inland Fisheries and Wildlife that shows hunters how to find the ovaries in the gut pile.  You can view it here. 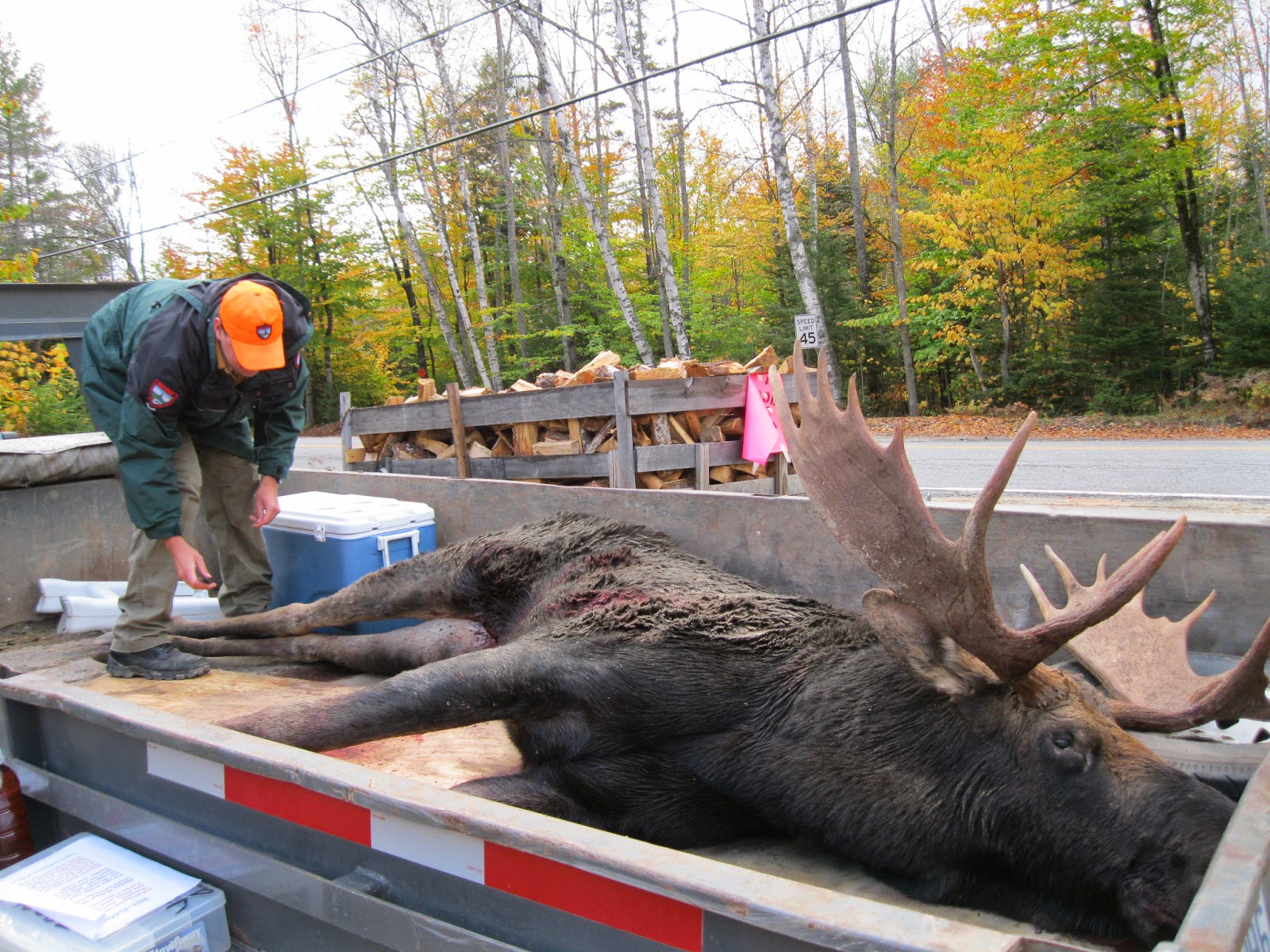 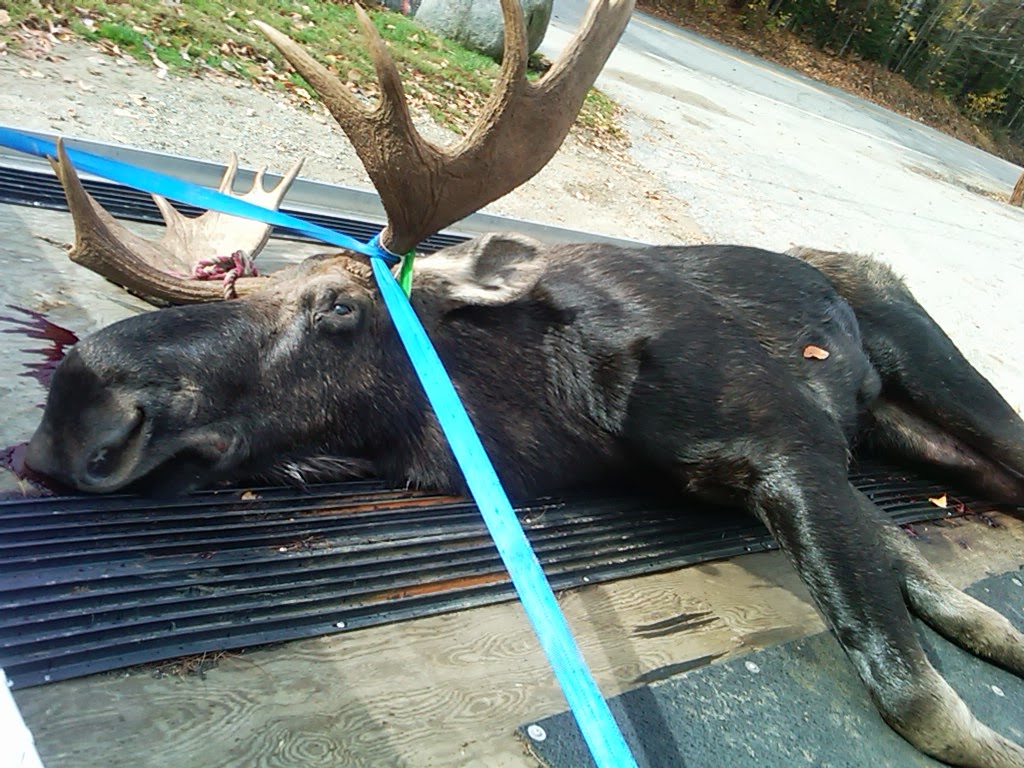 Our first moose didn’t roll in until about 11, but once the first one
came, there was a none stop stream of moose! And of spectators stopping
by to see how big each moose was and if they knew the guy (or girl) who
shot the large animal.

Many of the hunting parties had been scouting their spots for weeks and knew the patterns of the moose.  The owner of the store where we were tagging the moose said that over the summer, he had 9 moose get hit by cars and trucks.  There was no question that in Western Maine there are moose to be had!

For most of the early hunters that came in, their moose had been shot between 7am and 9am and it took them 2+ hours to gut it and get it loaded into their truck or trailer and over to the station. 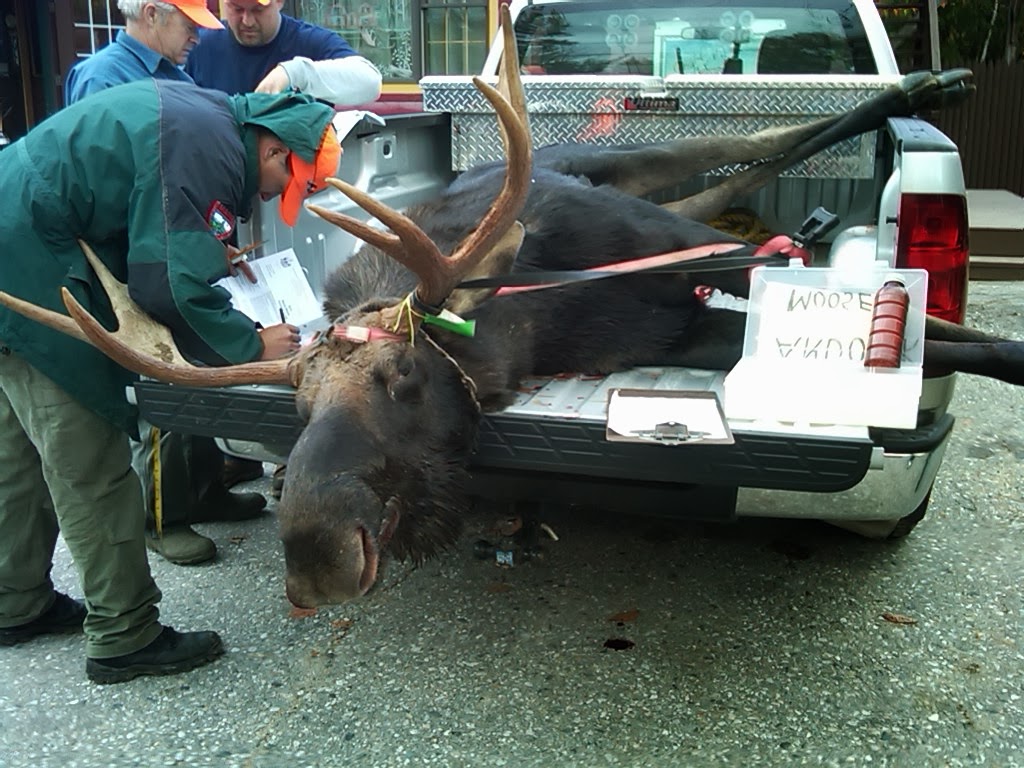 I tried to talk to each hunter about
shooting their moose and I found two people who were in the same boat
as Rick; it was their first time being drawn since the moose lottery started in 1980 and they had finally been picked and had been able to go out and shoot their bull moose. They were also done, saying that they had finally gotten what they had wanted after more than thirty years and were ok with never putting in for a moose permit again. 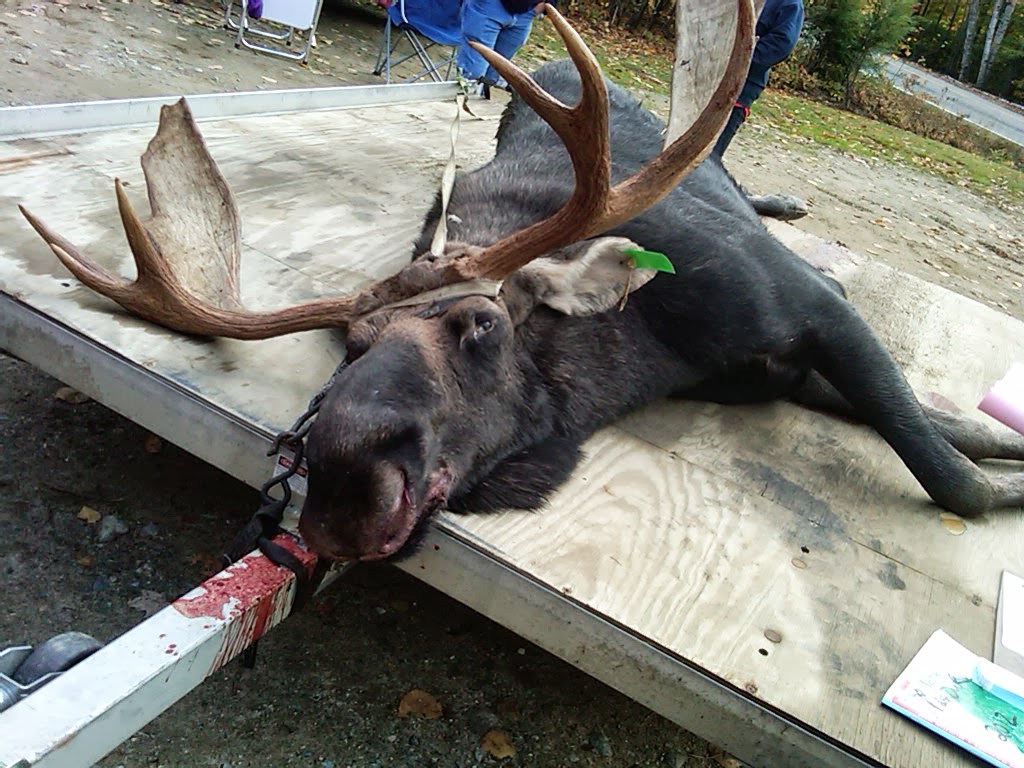 The youngest was a 10 year old who had put in for his first hunt and had not only gotten drawn but had shot a moose.  I couldn’t tell who was more happy and proud; him or his father!  There were also two women who came in to tag their moose.  Everyone was so excited to show off their prize and talk about the steps they had taken to secure a successful hunt, that it didnt matter if you had heard the same story being told three times, it was worth it just to hear the excitement and energy in people’s voices.

With each moose, my BIL or a couple of college students who were there volunteering, would take the measurements of the moose, its antlers, ask the hunter if they could remove a tooth and check the animal for ticks.  Only a few people wanted their moose weighed and many of them just wanted to get the animal to the butcher or hung up at their homes. 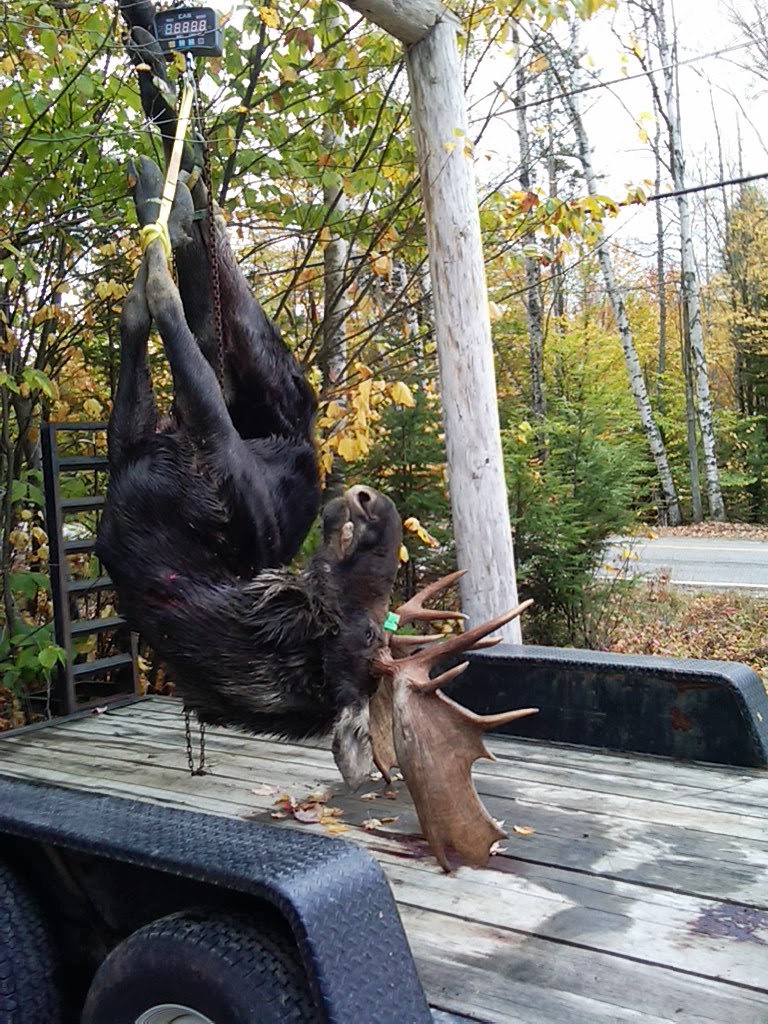 I left at 2:30 and in just the 3.5 hours that I was there, we had
seen 8 moose come in to be tagged.  My BIL said that the total number of moose that he saw while he was there was about the average for what they should have coming in for that area.  When the moose numbers were released for 2013, Zone 12 had maintained the same number of bull and cow permits as they had last year.

Fall is always an exciting time in Maine as hunters get out into the
woods in search of their prize moose, bear, deer, turkey etc. While I
was bummed that Dad and I did not get our moose permit last year and are
skipping it this year, I was so excited to hear about everyone’s hunt out
in the woods.

With the 2013 moose lottery winners recently announced, I am sure there are 4,155 people, like me, who can not wait for the chill in the air to return and the leaves to start threatening to turn to those fall colors.  Their chance at their dream hunt is just a few months away and I am sure, if they are successful, it will be a wonderful and memorable experience!  Good luck to everyone!!!

My son’s baseball game ended at 1:30pm.  As soon as we got into the car, I clicked the link to watch  names being read for the 2021 Maine moose lottery.  I had 21 points going into the lottery.  I watched Nate Webb, Director of Wildlife, read my brother in...
Read More

After we went to find some Epic Moose, Brian, Robin and I went to have lunch at Grand Falls.  It was a perfect Maine fall day.  The sky was blue, the fall leaves were vibrant colors of orange and red and yellow and the Dead River was pristine.  Brian...
Read More