I couldn’t wait for the big one 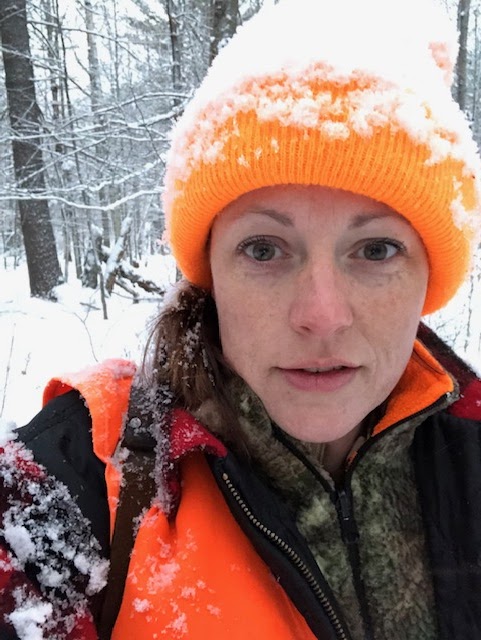 I couldn’t wait for the big one

I threw the car into park and ran inside, peeling off layers as I went.  I traded my heels for wool pants, boots and blaze orange.  I grabbed the gun and left.  There was less than two hours of daylight remaining and a snow squall predicted for the next hour as a cold front moved in.

It was 3pm when I walked into the woods and climbed into the Sky Condo.  The big buck’s tracks ran along the ridge to my right, so I turned my body to face in that direction.  I was hoping that I would catch him as he did his loop.  It seemed like a perfect night to have deer move.

I looked to my left, scanning in front of the Sky Condo.  I was startled to see three deer walking at me.  The snow on the ground made them pop out.  Two does and a buck! I could see antlers rise out and above his ears.  My heart was beating faster.  I had to get my gun up and see if this was THE buck.  The larger doe was cautious.  She looked in my direction but could not figure out what she didn’t like.  The younger doe was oblivious.  I leaned back to put a tree between us and slowly lifted my rifle.  I slid the safety off.  The buck was a six-pointer.  Not the big one that I was after.  I put my safety back on but kept the gun rested on the edge of the stand.  If I waited, maybe more deer – specifically that big buck – would come out into the open.

I watched as the deer found patches of grass and branches to nibble on.  They were in no hurry.  The larger doe continued to look around.  She was not calming down.  I had my scope focused on the buck, watching him and trying to decide what to do.

Thanksgiving was the next day and the weathermen had predicted single digit temperatures.  Did I really want to get up at 4am and freeze? Would this big buck actually show up during the day or continue his nocturnal routine? This was the first buck that I had seen all season and the only deer I could legally shoot.  Maine has a lot of deer and I should do my part and help the population.  My train of though was broken by the larger doe waving her tail and running.  I had to make a decision.

I put the crosshairs behind his shoulder and squeezed the trigger.  He bucked and ran into the woods. I looked around and realized that I was in the middle of a full blown snow squall and could not see the end of the field. I climbed down and walked to where the buck had been.  There was no blood. The snow was falling so fast that the new tracks were filled in with snow.  There was no definite track to follow. 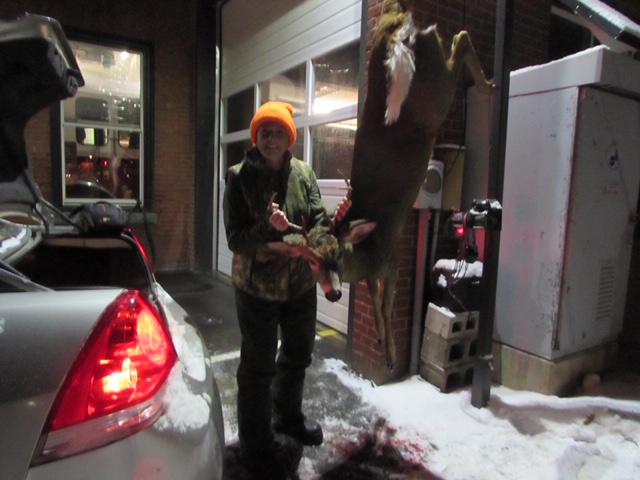 I called Dad.  I kept replaying the shot and where I had put the crosshairs.  I knew that it was a good shot.  There should be blood somewhere.  Where was this deer?  It seemed like forever but Dad arrived and I showed him where I knew the deer had been standing when I shot.  Dad and I split up and started walking through the woods.  We swung our boots from side to side through the snow, trying to dig up buried drops of blood that would help us find this buck.  Two inches of fresh, powdery snow had fallen in a matter of minutes.

“Got ‘im” Dad’s voice broke the silence.  A wave of relief rushed over me.  If it had not been snowing so hard, I could have seen the buck cross a shooting lane in front of me and drop.  Dad had found him. The snow had stopped and the last rays of sun were coming through the clouds.  I was tagged out.

It was almost dark when we got the deer gutted and loaded up to go to the tagging station.  Dad gave me some grief over not being able to hold out for the big buck.  He was right.  I was proud of my kill but I had shot a smaller deer instead of trying to out whit the big guy.

It’s words to think on.  The exceptions would be if I have the opportunity to take a deer and no one else in the family has shot one yet.  But, maybe that will be my goal this year – an 8 pointer or that big buck, if he is still around!

I shoveled bait from a 55 gallon drum into five gallon buckets and we loaded up the truck. Eight buckets of assorted types of bait, two buckets of disgusting beaver and some secret ingredients and we were off to check the bait sites for the 2015 bear hunting season! A...
Read More

Dads play an important role in getting the next generation of hunters interested and out in the woods.  It takes almost as much skill to get the kids out there as it does to make that shot and harvest an animal.  There is the concern over getting cold,...
Read More