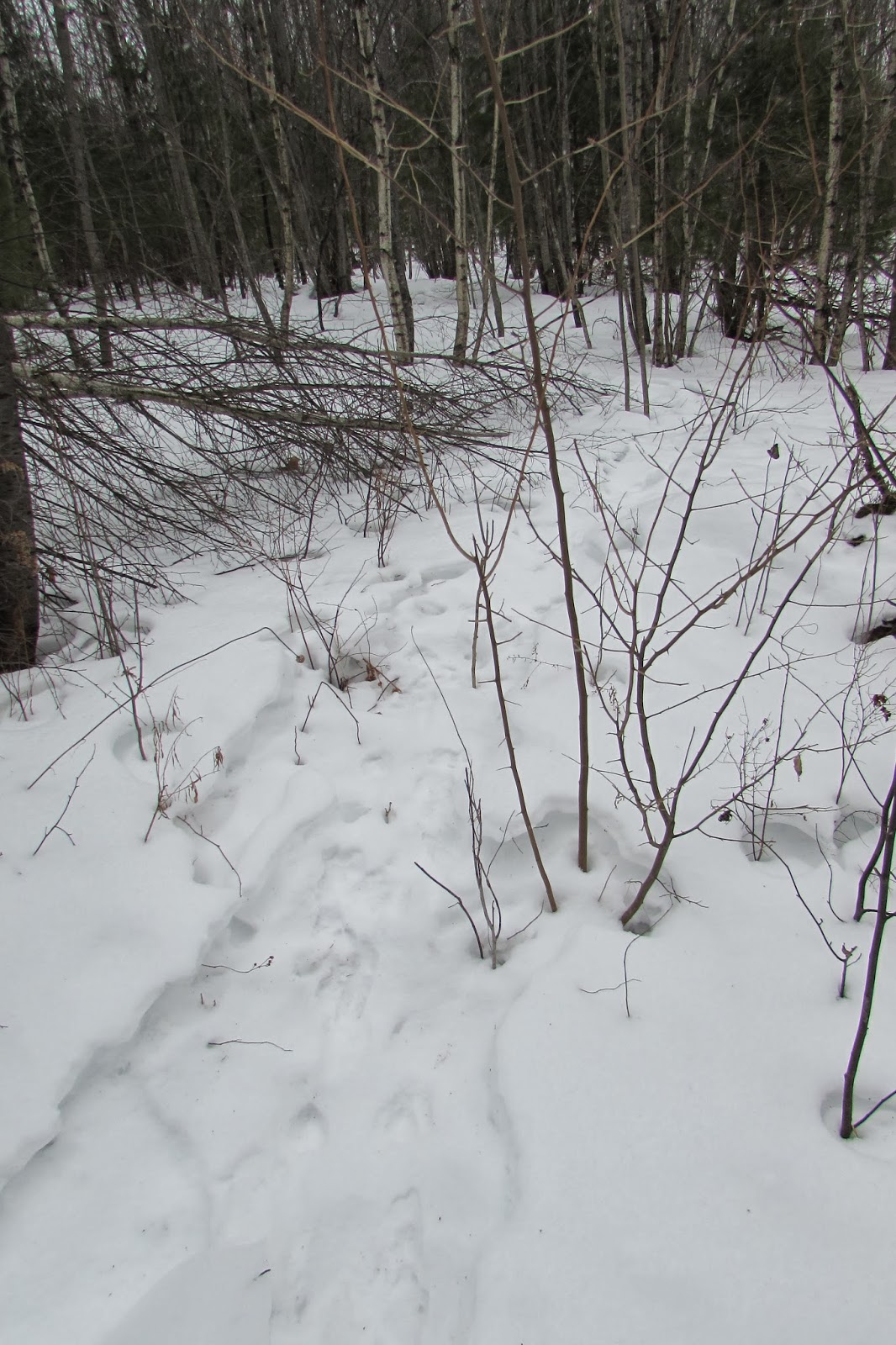 Dad, Hubby and I set off to see if we could find some sheds.  Dad has found them before but I really wanted to see what sort of bucks lived through the season.  On Saturday, with a light snow falling, we took to the woods.

Dad had been out doing some cutting and had found a rib cage (sorry that I forgot to take a photo of that!) but he was not sure if it was a coyote or a fawn.  He also found a strip of hide.

We headed towards my tree seat to hop on some deer trails in search of sheds but also, to check out the improved shooting lanes that Dad cut for me.  I have already been told that I will be spending a lot of time in my tree seat next fall, so Dad wanted to make sure that I would be able to see any deer within shooting range from where I sit.  No more messing with large, thick evergreen coverings.

We walked along the shooting lanes and it was as though we had entered the bathroom of the entire deer herd! Everywhere we stepped we saw had well known little black pellets, yellow snow or deer beds.  Lots and lots of deer beds.

We crossed the stream into some thicker woods and stayed on the deer trails as best we could.  The snow had added a layer to the crust that we tried to stay on top of.  Every once in a while, one of us would catch a patch of ice or crunch through the crust.  It made for some cautious trackers.

What I was happy and not happy to see, were the rubs all over the place.  They were from the fall, but it was nice to know that the bucks we were seeing on the trail cameras were staying pretty close to where my seat is.  Frustrating that I never saw one when I was sitting in the tree with my gun, but  nice to know that they are staying so close.

We continued to look for sheds but never found any.  It was nice to be back in the woods though and nice to start thinking ahead to the fall and our hunting plan.  There are so many deer around us that I hope this fall, at least two of us will fill our tags.

The fresh air, snow and plentiful deer sign made us all very happy to be back in the woods!

How do you create outdoor kids?  You have them grow up experiencing outdoor adventures like it is a normal part of life. Over the summer, as I was on maternity leave, I was determined not to let the nice weather slip away without getting some fun, outdoor...
Read More

Trail Cam photo.  I wish I had been able to take a shot at him. There are islands off the coast of Maine that have had to eradicate their deer population for the health of the people who live there.  There have also been controlled hunts to help with deer...
Read More

After snowstorms in March and rain, Saturday was one of the nicest days we have had in a long time.  We eagerly got outside and went for a walk.  Baby fell asleep in the jogger, wrapped in a blanket with the sun on him and the wind in his face... it made me...
Read More