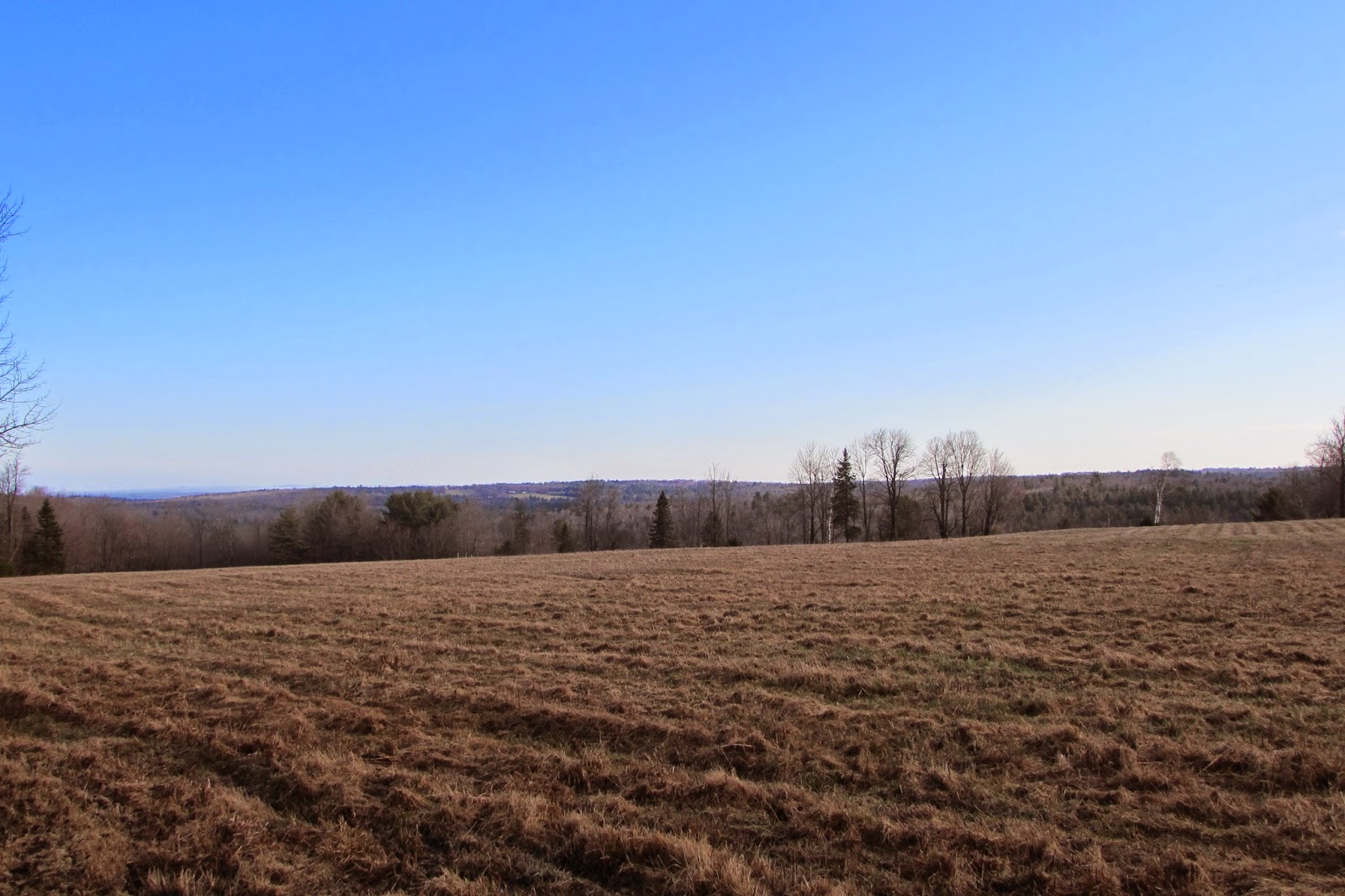 I have been thinking about it since Friday.  The gobbling that just got closer and closer, seeing the quick movement in the dense trees and brush just in front of me, that black band across the top of those dark brown feathers and his white head stretching above the blow downs to find that purring hen that he was after.  I could hear the drumming and strutting as he got closer.  Finally, there he was in front of me.  He stepped out, his long neck leading his puffed out body into the slight clearing…

Dad and I woke up a little before 2:30am in order to have breakfast and meet our guide, Brian for our turkey hunt.   We got to these fields around 4:30am with just enough light coming up that we didnt need flashlights. Brian knew that there was a Tom around and that it would be a good place to start.   He brought along a blind for Dad and I.  It was raining a little as the first light of the day came up over the trees. Brian sat behind us and off to our right with his box call, slate call and mouth call, he was ready to call in some turkeys.  We were incredibly impressed when he started calling – it sounded as though there were two turkeys calling at once (when we moved spots, Brian said it was he and a hen nearby that were calling).  Within minutes of the first call, we heard a gobble back.  It must have been the turkey that Brian knew was there.  He continued to gobble back at us, but never got closer, regardless of where we went along that field and tree line.  That turkey was not leaving his hens, no matter what.

We left the field and headed to the truck to search the nearby fields.  We
found a couple of jakes that we tried to call back to no avail.  It was
getting warmer and warmer by the time we headed down this long camp
road.  It was one of those roads that was filled with tracks of all
sorts of animals – a mecca for hunting.

We walked a few miles down the road and came to an intersection where we stopped and called.  There was a light breeze which made it an almost perfect day to be outside.  Dad and Brian sat on one side of the road while I sat on the other.  Sometimes, I think just being outside is the greatest thing about hunting.  Twenty minutes in and without hearing any gobbles, we headed out and decided to call it a day.  It was about noon.

Driving back to where we had left my car, Brian talked about a big Tom that was eluding hunters.  A college guy had seen the bird in the field and parked quickly and walked towards the bird, which accomplished nothing besides spooking the bird and putting it on edge.  The next day, Brian saw a blind in that same field with four decoys out and no turkey.  As Dad and I were listening to Brian, he pointed out the field with the infamous bird, “Every afternoon when I drive by, that bird is in the same… and he is still there!”  Dad and I turned out heads to see the arch of the turkey pecking away in the corn field, “Want to try and get him?” Brian asked. YES!

We drove further down the road, turned around and parked on the edge of the neighboring field.  The plan was to walk down the field, into the woods and quietly move as close to the bird as possible while staying in the woods.  Dad decided to stay in the truck so he wouldnt cause more noise than was necessary (and he didnt have any camo on because we are deer hunters and dont need it. Guess what he is getting for Father’s Day?). The recent rain made the woods a swampy mess and we battled blow downs and cut softwoods.  Cattails made it nearly impossible to be quiet.  Brian and I made our way to the corner of the field and found a spot to sit.  I picked one dry clump but it was a little too exposed so I moved further into the woods to the next dry clump.  It was a perfect spot with a clear view of the field to my left, the path of blowdowns off to our left and the turkey was almost in front of where we sat.  I was surrounded by small trees with a dead tree in front of me.  I used it to brace my left knee and gun so that the minute I could get a good shot on the bird, I would not need to adjust.

Brian sat next to me on the clump and called.  We heard a gobble!  He called again and the gobble got closer.  Mimicking a hen purring, Brian lightly scrapped the slate.  I could see movement in the trees!  Then, I saw the fanning of the tail with its black stripe arching over the deep brown feathers.  A white head popped up behind a blow down then went back down so that he could drum and strut a little more. “Take a shot when you can.  Aim for the white of the head.” I took off my safety and was ready.  I lined up the bead at the end of my gun with the middle of the gun and controlled my breath so that I wouldn’t shake.  The tom was primed and coming at us fast, looking for that hen!  I remember seeing his white head and puffed out chest come out of the brush and into the clearing at my one o’clock.  I was ready to shoot but I couldn’t, I was stuck! Stuck!  That dead tree that seemed like such a great idea to use as a brace prohibited me from moving the gun past my 12 o’clock.  I was wedged too tightly between trees and my gun was too long to move quickly. I was stuck.  The turkey had walked out into a clearing and I could not move my gun to shoot him.  I tried to shift myself but he was gone.  Vanished.  I shifted myself into position and waited.  The turkey must be nearby, he was just there.  Nope.  Unlike deer that you can spook but they won’t really leave, this guy was gone.  I was so mad that I had put myself is such a bad spot.  I knew better!

When we reached the truck, Dad just smiled.  He had seen the turkey fly from where we were in the woods down to the other end of the field just minutes before we came out of the woods.

Defeated.  While it was exciting and a great learning experience, I was defeated.  I have been thinking about it ever since and I keep seeing that white head pick up then come out of the woods into that clearing.  Brian figured we were about 17 yards away and that the Tom had at least an 8 inch beard on him.  Urgh! But, I know now how close the turkey needs to be and how I need to sit in order to be successful.  I still have three more weeks in the season and I hope that I can get out a few more times.  I was so close to bagging my first turkey!  Next time.

← Prologue: I should have listened to myself One road and SO many signs! →

After we went to find some Epic Moose, Brian, Robin and I went to have lunch at Grand Falls.  It was a perfect Maine fall day.  The sky was blue, the fall leaves were vibrant colors of orange and red and yellow and the Dead River was pristine.  Brian...
Read More

Finally, after the cold winter it is time to be back in the woods.  I am eager to shake off the winter and get back into the sunshine, nicer temperatures and even play in the mud a little bit. This year spring means turkey hunting, fishing and looking for some...
Read More

Getting Fit to Hunt

If you follow me on social, then you know I have been training with Jeremy Koerber at Fit to Hunt to ensure I am ready to hike into a choppin' miles from a dirt road in search of a moose.  I know that I don't need to do that. I know that there are people who are...
Read More