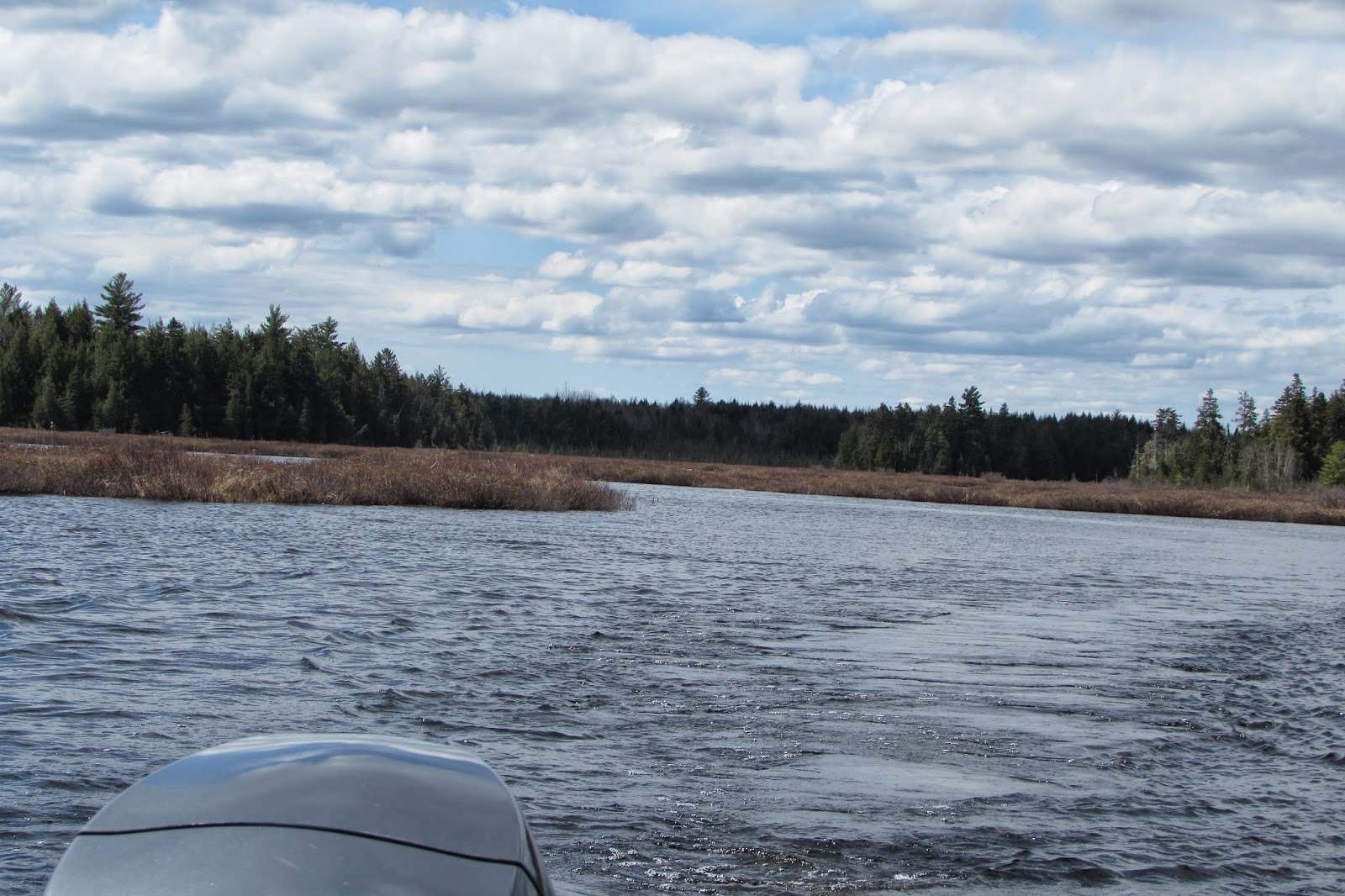 I am afraid that I could really get addicted to fishing.  The only thing that is really stopping me are those images of fishing hooks embedded in fingers, thumbs, hands etc. and realizing that that could be me.  I shutter!

But when Al took me out fishing on the Big Lake, I could see myself really getting into fishing.  The weather was perfect and I was eager to see if I could really land a fish.  I had struck outturkey hunting so I was hopeful that my luck would change.

Al and I met up at 8:30 and headed out.  It was perfect weather, sun and a little wind.  As we motored around, I was surprised by the lack of other boats on the water.  We talked about fishing, getting women outdoors, the status of every huntable animal around and the camps themselves.  People from all around the world fly in to stay in Grand Lake Stream and fish these waters.

We had two spin casters set up and I held onto a fly road that we were trolling with.  The ease of the fly rod surprised me since I had always thought that it was more complicated then the spin casters.  I really enjoyed fishing with it and want to rake more lessons or classes to see if I really want to invest in this. 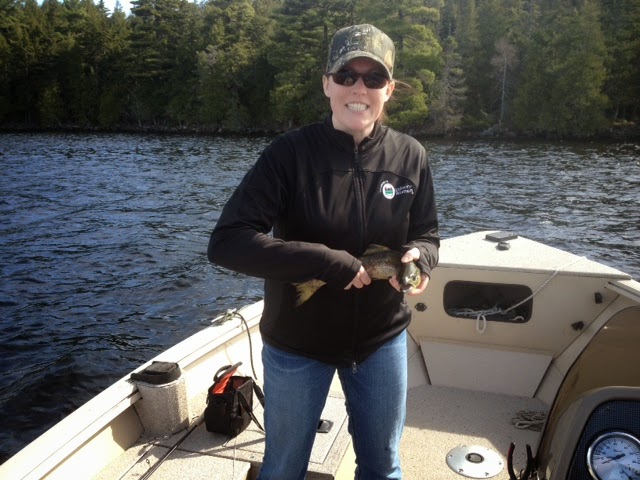 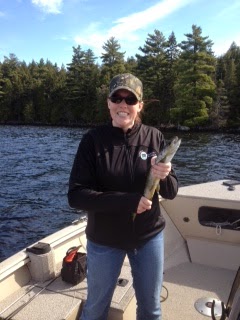 Believe it or not, this is the first fish that I have ever held.  Sad as an outdoors-woman, huh?  But it was fantastic!  We were trolling and when I felt a bite, I calmly undid the loop that Al had told me to tie around the spool’s handle and started reeling the fish in.  Al stopped the boat and grabbed the net. 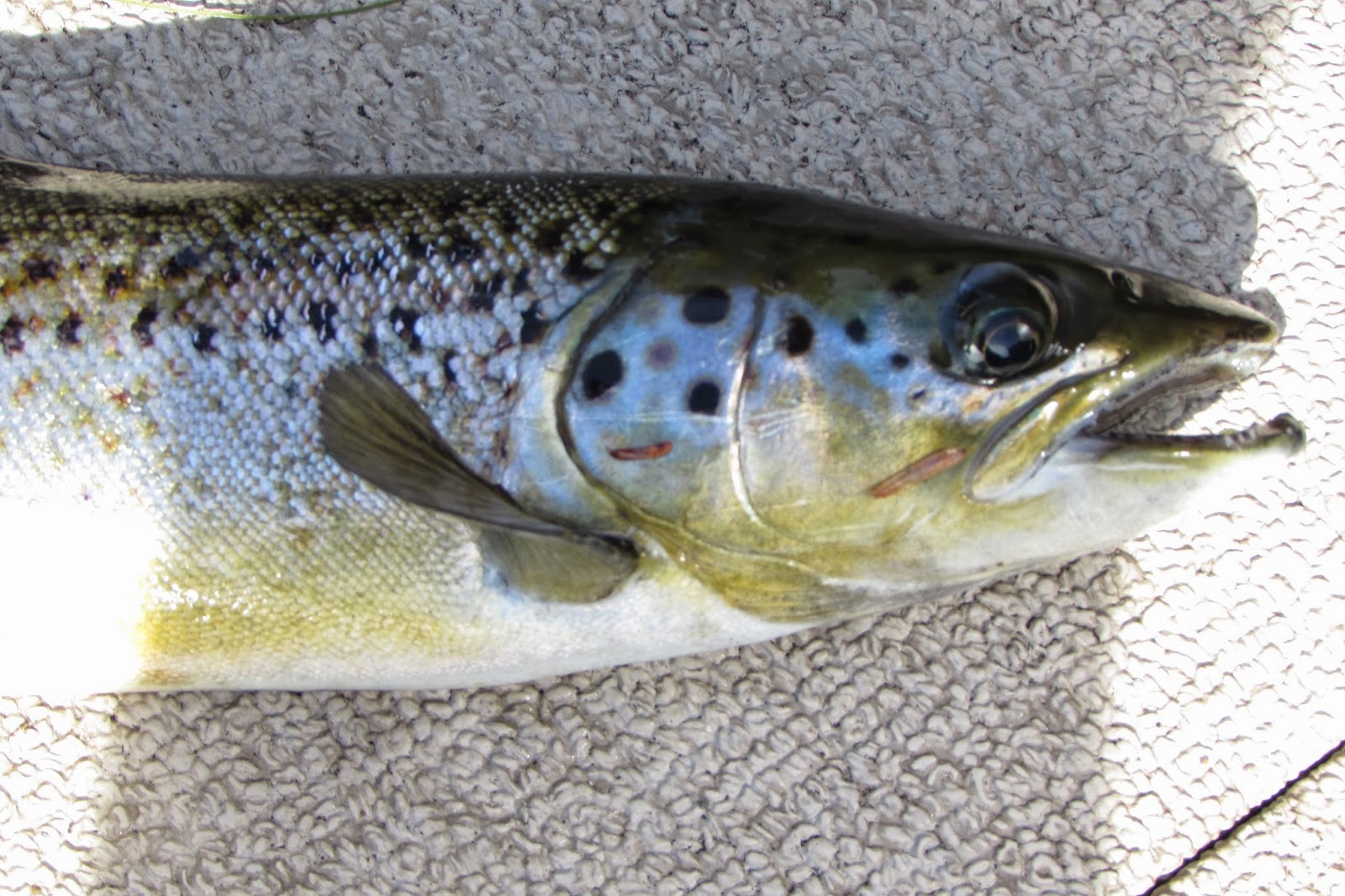 This small salmon was feisty as we brought him on board. Al placed a wet cloth on him before I picked him up for the photos.  I had hoped to keep him but he was too thin so we tossed him back. I couldnt help but feel a little hopeful when we put him back in the water and he didnt swim away immediately.  I hoped that he would be dinner, but when I put the net back in the water to try and bump him along, one brush of the net again and he was gone into the depths of the water.

Al and I spent a few more hours on the lake before we called it.  I caught a branch as we traveled over a school of fish and that was it.

When we got back, I asked Al to show me how to properly cast.  He did a great job and gave me some tricks of the trade as I stood at the end of the dock and threw out cast after cast. Then, I asked about the fly rod!  We headed to the lawn area of the camp and Al had me start making “S”s with the line.  It is an impressive art, especially when you watch someone who has clearly been doing this for a while.  It looked so natural.  I think I got the idea of how the cast should feel and what it should look like, but the hour that we spent practicing it is all that I have done.  I really need to get a rod in my hands and get outside!

← Chet's Camps in Grand Lake Stream Ready or not, we are taking over the industry. →

The bait sites are getting slammed!

After Steve and I tweaked the bait sites and refilled the barrels and crates, we waited to see if and when the bears returned to the sites.  Three days after we were there, Steve went back to check: bam! bears at both sites and no food left. Other hunters have...
Read More

It is like Christmas every time you check the cameras... will the same buck be around? are there new bucks? what about the coyote? how is the fawn? Then, you get a glimpse into the woodland word. I am surprised that this little ones still has its spots but it is...
Read More

I am a sucker for the snow.  If there is a snow storm coming or even the threat of a snow squall, I am in the woods. Two years ago, I stood in a snow storm Dad shot a nice 8 pointer and later that season, I shot my own buck in such a heavy snow squall that we couldn't...
Read More