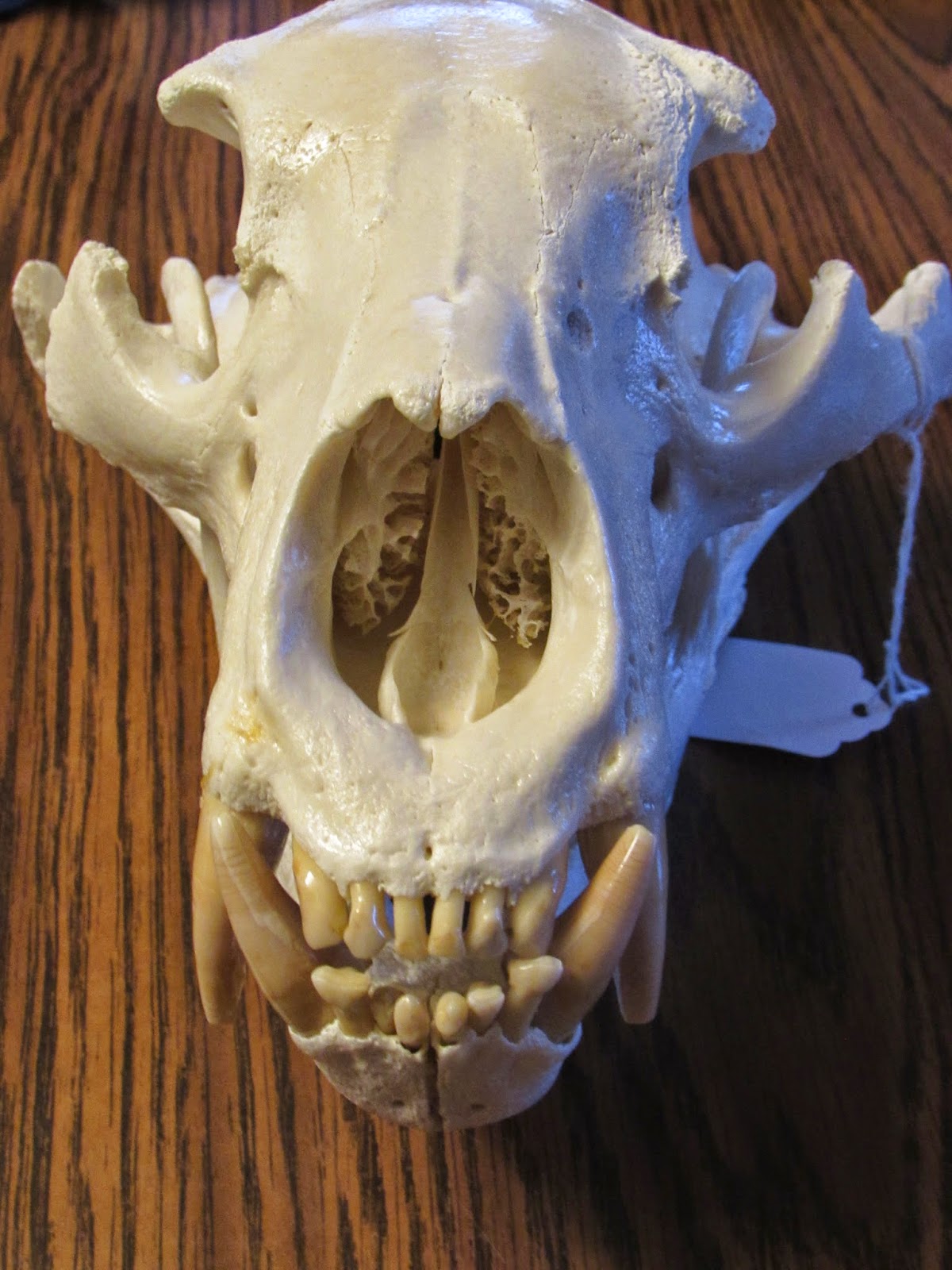 I
have bad luck with skulls. It started with my bear and will end with my coyote
because I have learned which taxidermists (and butchers) are not worth the convenience.

I
shot a 457lb bear last October and went with my guide to bring it to the
butcher.  I had decided that I wanted the
skull saved and would have the hide made into a rug.  I didn’t have the room or the desire for a
mount.  The butcher got his knives out
and began hacking away at the bear.  I
watched but didn’t really know what I was looking at.  He hooked the bear by its hind legs, lifting
it off the ground and started peeling away the hide.  It seemed to come off quickly and my guide
made sure that he kept the paws intact with pads and nails included.  When it came time to cut the head off, it
took him a couple of attempts before my guide’s eyes got wide and he stepped in
to help get the cut where it needed to be.
By that point, it was too late.  The
back of the skull had been cut off and a separate cut had almost cut the skull
in half by the cheek sockets.  I
delivered the head in two parts: one connected to the hide and one in a plastic
bag.  Lori and Jim Geib at New FrontierTaxidermy in Solon were up to the challenge.  A month later, I had a bear skull completely intact
except for one cheek bone. It might not be the best looking skull, but it was
fixed.

Then,
I went coyote hunting and shot a beautiful 37lb male that came into our rabbit
call.  Again, I wanted a clean skull and
hide.  I got a recommendation and took the
coyote to a taxidermist nearby.  The
animal had been dead for less than 18 hours when I dropped it off, still
totally intact.  I described what I
wanted done and was told that it would be three to four months because he would
send out the hide and send the skull out to have it beetled.  Four months later, I called and was told that
it would be another two months.  Eight
months after I dropped of the coyote, I called again and was told that the
skull was back but that the hide would need another few weeks.  Grateful to have something back, I went to
get the skull.  At first glance, it
looked great: sharp teeth, clean with no breaks and the top jaw sat perfectly
onto the bottom jaw.  The taxidermist
wrapped it up and I was on my way.  When
I got home later, I unwrapped the skull and nearly fell over.  The stench was horrible.  I started looking closer at the top jaw and
saw dead beetles. Two were stuck in the nasal cavity behind the cartilage, one
was stuck at the front of the skull near the eye sockets and pieces of dead
bugs were stuck everywhere there was cartilage. I immediately started asking friends
what to do and ended up on the phone with Jared Delaite of Delaite’s Taxidermy
in Woodville.  Jared took the time to talk
me through what I could do to get the beetles out of the skull and fix the
smell coming from it.  He was more than
happy to help me and make sure that I would be able to get the skull that I
want.

Both
of these skulls mark successful hunts but without the knowledge of Jared to fix
the coyote and the incredible work of Lori and Jim to piece together an almost
ruined bear skull, I would not be able to save them as mementos from my hunts.  Unless I shoot a monster buck and get it
mounted, I am now done keeping skulls.

Dad, Hubby and I headed into the woods to see where all of our deer are.  We found them but we also found some cool tracks in the snow.  Can you tell what they are? Look at all of those drag marks! Straight line of tracks Two by two tracks Can you see those...
Read More

The Outdoor Blogger turns 1 tomorrow! I recently added this little blog to their network and got a wonderful email from Rebecca welcoming me to the club. It looks like a great resource for folks to connect, network and talk about whats going on in the outdoor world....
Read More

A week long walk in the woods

With my dad. And two 30-06 shotguns. Here is where we were: We walked all over Zone 17 looking for a moose. We met at least 100 hunters over the course of the week who were riding the roads waiting for the sight of the over sized cow with hair... it was like musical...
Read More