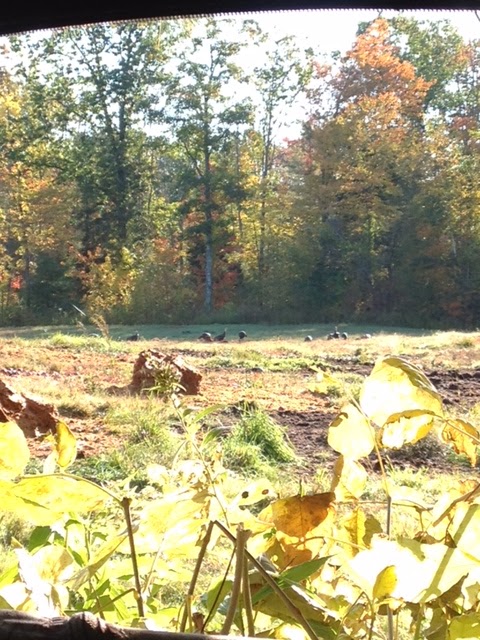 I was ready! Everything was packed and the sun was out.  I drove down to meet up with Steve and we were going turkey hunting.  Well, I was.  He had already tagged out and was sharing his blind with me.

We made our way through the trees and towards the blind on the edge of the field.  The turkeys were already there picking at the food in the field.  It was the first time I had ever hunting agricultural land and the first time hunting turkey in the fall.

We wanted to make sure that we were not seen, so we crawled our way into the blind and set up the chairs, my steady stick and gear.  We watched the birds eating, unaware that we were there.  For the next hour, we watched and hoped that they would get close enough to shoot.  They didn’t but instead went into the woods just out of range from us.  We could hear the leaves crunch under them.

Having worked the night shift, Steve left me in the blind and headed back to the truck to take a nap.  I watched the field and listened.  After a few hours, I still had not seen any movement. I was zoning out when I heard chirping.  My seat was in a small gully so I didn’t have the best view but one good enough to see the woods line and the remaining crops that the birds were eating earlier. 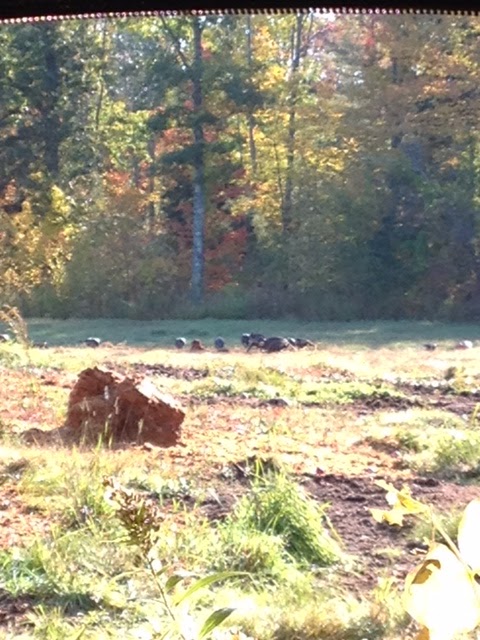 I should have been tuned into the chirping but I wasn’t.  As it got louder, I lifted myself slightly out of my seat to see if I could see anything.  I could have flipped my gun around and hit the hen in the head with the butt of my gun.  She probably wasn’t that close but she was leading a group of birds along the end of the wood’s line right in front of the blind.  Maybe three feet from me.

I crouched down below the blind and shifted up into Steve’s seat to get a better shot and have a higher vantage point.  The turkeys kept coming in front of the blind.  They were too close not to shoot.  I pushed the safety off the gun and I made sure the butt of the gun was nestled into my shoulder AND that both beads were lined up (something I forgot this spring) and I fired.

Birds went in all directions but not in a frantic, what just happened sort of way.  It was more like we don’t want to be here anyway.  The bird I had shot at was not on the ground so I shot again and saw him flap a little.  As the rest of the birds headed into the woods, he was trying to follow and couldn’t.  He wasn’t flying but he wasn’t dead.  Damn!

I sent Steve a text but he was already on his way down. There was no dead bird waiting for him.  I felt horrible. We walked along the edge where I had shot at the bird and saw fresh feathers but no blood.  We split up and walked into the woods where I saw the birds last.  Steve flushed a few of them and they flew off to our left.  After a few minutes, we backed out and went into a different spot.  Steve headed right and I went left.  I walked a few steps and listened.  I could hear rustling but couldn’t see anything. I stopped, turned around and looked as hard as I could. Nothing.  I could see Steve in the brush (he had taken his camo off) and decided to follow an old skidder trail towards him.

I took three steps before I saw the turkey.  He was nestled down in the sun facing a large tree. And just like I have a habit of doing with deer when I am on the ground with them, I watched this bird before I did anything else. He hadn’t flown with the others and he has not left when he heard us crashing through the brush. This had to be my bird.

And then he flew away.

Steve turned and watched the bird fly. He didn’t see me standing right there next to it (thanks Kryptekand First Lite) so he yelled for me.  Seeing the bird fly the way it did, he was confident that it was fine.  I might have knocked the wind – or a few feathers – off of it, but I had not wounded it.  Again, there was no blood were the bird had laid in the sun.

We headed back to the blind to get my stuff.  My ego was a little bruised as was my shoulder (I had a bruise for almost a week) but I had at least seen the birds close up and had taken a shot.  That had to count for something, right?

But, I am calling it for turkey hunting.  I hate those birds 😉

← The joys of owning land Anatomy of a bait site →

Over the weekend in Maine, 3 hunters were shot. One man died. Also over the weekend, 2 dogs were shot and killed as they were mistaken for coyotes. In this article, John Holyoke talks about what its like for him to talk to his non-hunting friends and how bad the sport...
Read More

I joined the Becoming an Outdoor Woman in Maineboard in April because I love the outdoors and write a blog about hunting. I joined because my friend Rabid sent me the application. I attended board meetings and started understanding what is it we do as Friends of Maine...
Read More

The 4th weekend of deer season was a bust as I had to take my kiddo to a birthday party for a classmate.  I (half) jokingly told him that from now on, when he meets a new friend, he needs to ask them when their birthday is and if it is during hunting season, he...
Read More