The end of deer season is for the birds 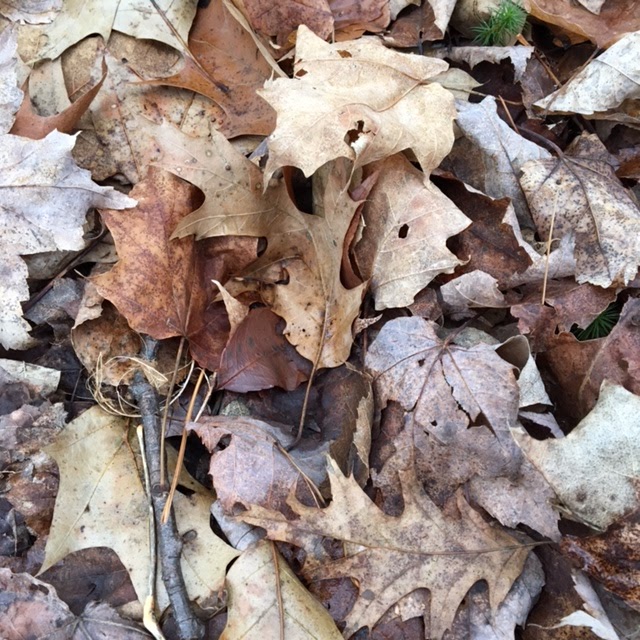 The end of deer season is for the birds

The last few days of hunting season were eventful in the wrong ways.

In order for my mom to prepare and cook what she needed to for Thanksgiving dinner, I stayed home to watch O while Dad and Hubby went out for a few hours. In the afternoon, Hubby stayed home while O took a nap and Dad and I went out.  The woods were quiet and calm. We didn’t even see a squirrel.

Thanksgiving night, O got sick; throwing up sick, which for a two year old is a scary thing. We made the decision to not hunt on Friday morning in case he still didnt feel good.  I have been criticized in the past by readers who think that in order to be a good, qualified hunter, you need to prioritize hunting above all else. I willingly stayed home to take care of my son.  No rack of antlers is worth the comfort of your kid. None. It might make me a ‘bad’ hunter but it also makes me a great mom.

Friday afternoon, with O down for his nap, we headed out for the afternoon sit. There were fresh tracks and we knew that the deer had been around but still no action in daylight hours. 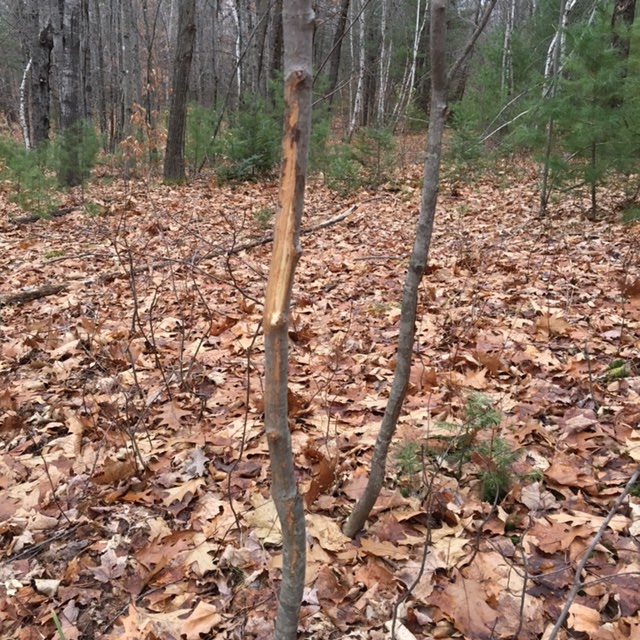 There were fresh scrapes and rubs along the usual paths.  Those bucks were all around is and it was almost impressive that we had made it almost the entire season without seeing a single buck walking around.  Even for Dad and Hubby who walk more than they sit, the only thing that they jumped were does.

On Saturday morning, we took to our usual spots.  Hubby in T3, me in the Sky Condo and Dad somewhere in between and walking when it got bright enough.

At 8:30, I checked my phone and had received a text from Hubby hours before.  He had just gotten into T3 when an owl flew down and landed on the railing in front of him.  Its wings had been so wide that they came inside as it landed. Hubby jumped in surprise of the visitor and realizing that he wasn’t the size of a meal, the owl had flown off to a nearby tree.  We have seen owls before while we are out hunting but this was the closest any of us have been to one.

Before lunch, we headed over to the mountain to see if we could jump a doe like Dad had done for me a few weeks before.

I stood in the back of the truck and watched and listened.  I reminded myself of the moose hunters that Dad and I had seen years before, who just drove the roads looking for a moose.  It was a little windy but nothing compared to the previous weeks.  It was a lot quieter than the area by the Sky Condo and it was nice to hear the quiet.

For the past three years, there has been a bird that follows my Dad when he comes along this roadway.  If she can hear the truck, she comes to say hi.  The week before when Dad was there working, she flew beside his truck as he was leaving.  We had not seen her when we drove in, but as we headed out of the woods for home, she came to say hello.  Dad has named her Henrietta. 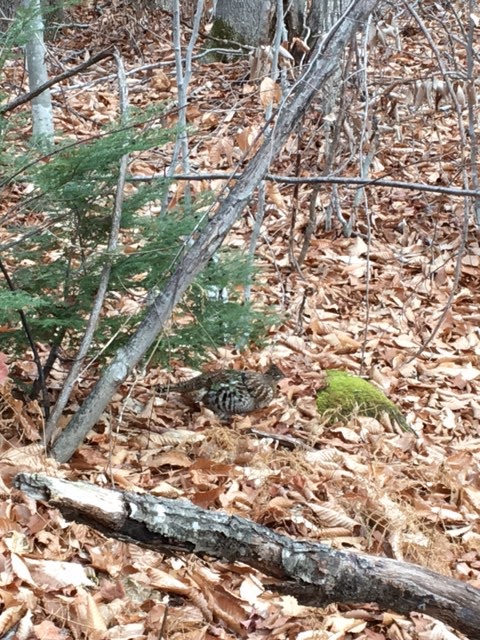 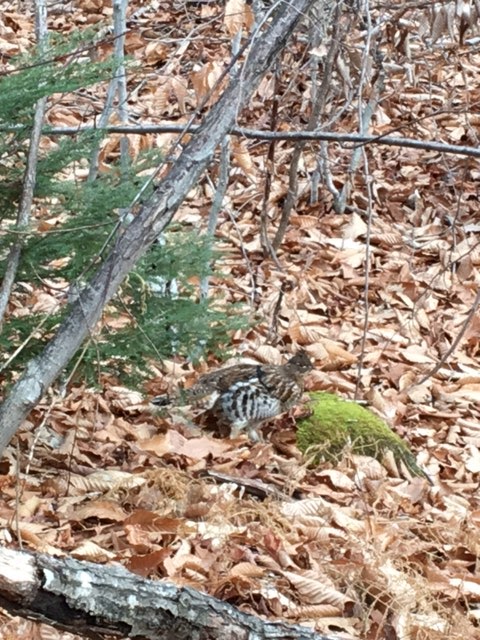 She walked beside the truck as we slowly crept down the road.  When Dad sped up to leave, Henrietta put her head down and started running to catch up.  Dad slowed back down and she came back over to the truck. and looked at Dad.  Our hunger won out and we left her there in the woods but I am sure we will see her again soon.

The guys had their cool bird stories to tell and I had nothing.  I hadn’t seen or heard much of anything while I had been sitting all morning.

The afternoon would be our last attempt at the 2015 deer season. And this is how my season ended: in the most cruel of ways…

Those damn turkeys! 10 of them – some with beards that reached the ground – came out of the woods and started eating the grass right below the Sky Condo.  They stayed around for probably 10 minutes before lining up and walking back into the woods.  I kept hoping that it was a good omen since the last time they came out, the doe and fawn followed later.  But nothing came.

We ended the day by each having a run in with a different bird(s) but no deer.  Dad is still muzzle loading but with the warm temperatures and rain, it has not been an idea hunting season. 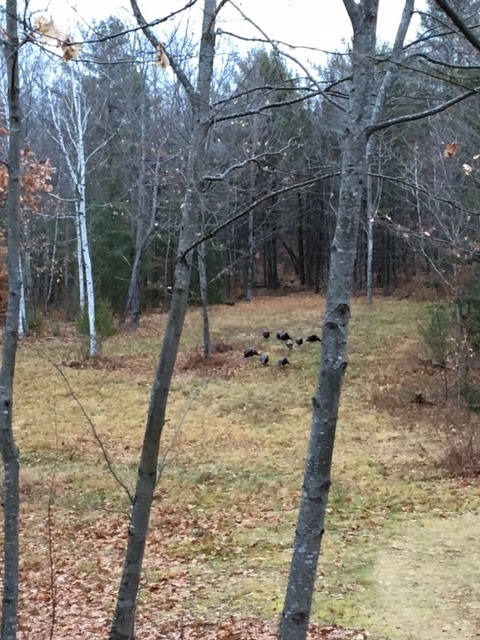 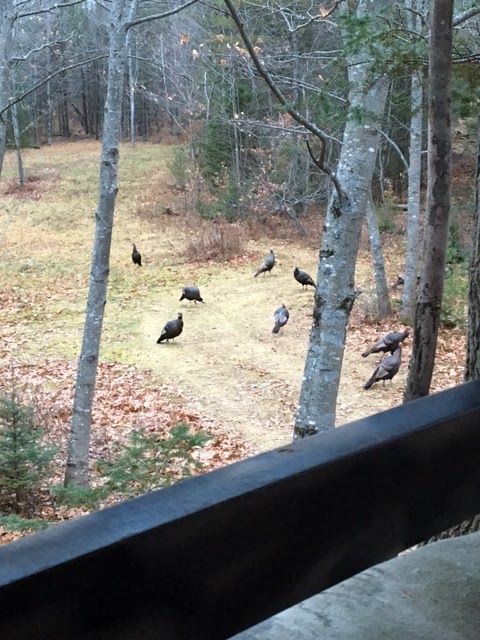 ← The Orange Army To bow or not to bow →

This little story has been locked away since last season.  I was sworn not to share it.  It was a story I was willing to lock away forever.  But, when Dad told a few people, it was like getting the ok to share it.  Dad and I were in the Sky Condo...
Read More