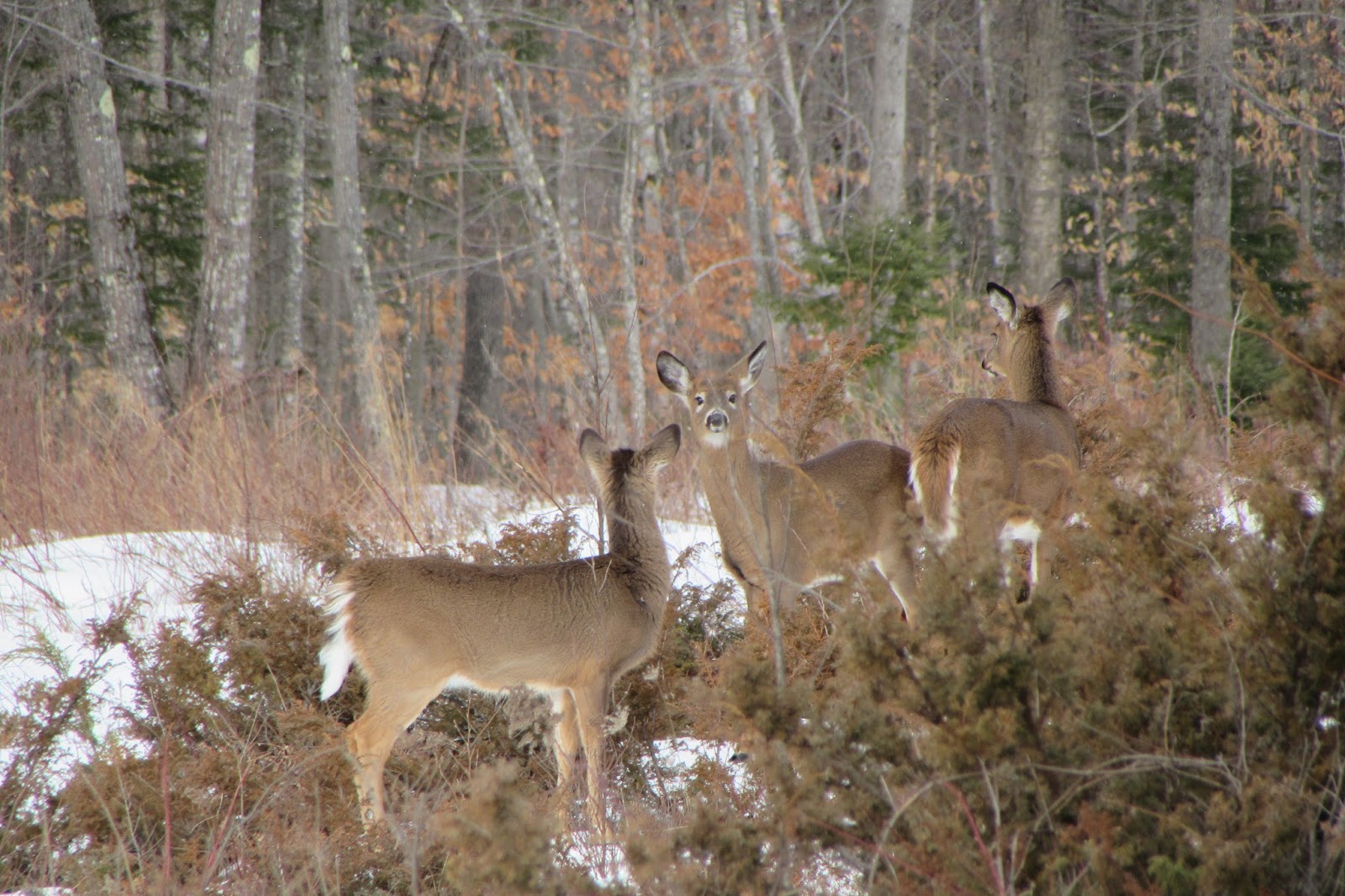 At this point, Staci and I just say that we are doing shed hunting but in reality, we just walk through the woods and see what we can find.  Our latest trip was quite the adventure.  I took Staci to T3 and showed her where Dad had shot his doe.   The trick was getting there without getting hurt.

There was enough crust on the snow to be able to walk on it in the morning.  We debated bringing our snowshoes, but ruled that we could handle the crust with the occasional inch break through.

The amount of deer tracks right from the start were nice to see.  They had been checking the old apple trees and following a lot of the same trails that they had been taking during hunting season.  We started off at the Sky Condo, then traveled through the woods to T3.  There were a handful of deer beds close, which is not typical for them at this point in the winter.  It looked like the herd was staying closer to the Sky Condo then they typically did.

Staci and I made our way through the woods and into a clearing.  We were talking and I happened to look up and see deer standing nearby watching us but not worried that we were there.  Something else was catching their attention more than us.

One doe never stopped watching us but the other two either didn’t care that we were there or never realized it.  We kept walking to T3 and made sure that we were not getting too close to the deer.  There was enough winter left that we wanted to make sure that the deer were not using too much energy thinking that we were a threat.

We made it half way across the clearing when I saw what the deer had been looking at; one lone deer walking along the small ridge line. A buck possibly? Maybe the big one that has alluded us for the past few years? 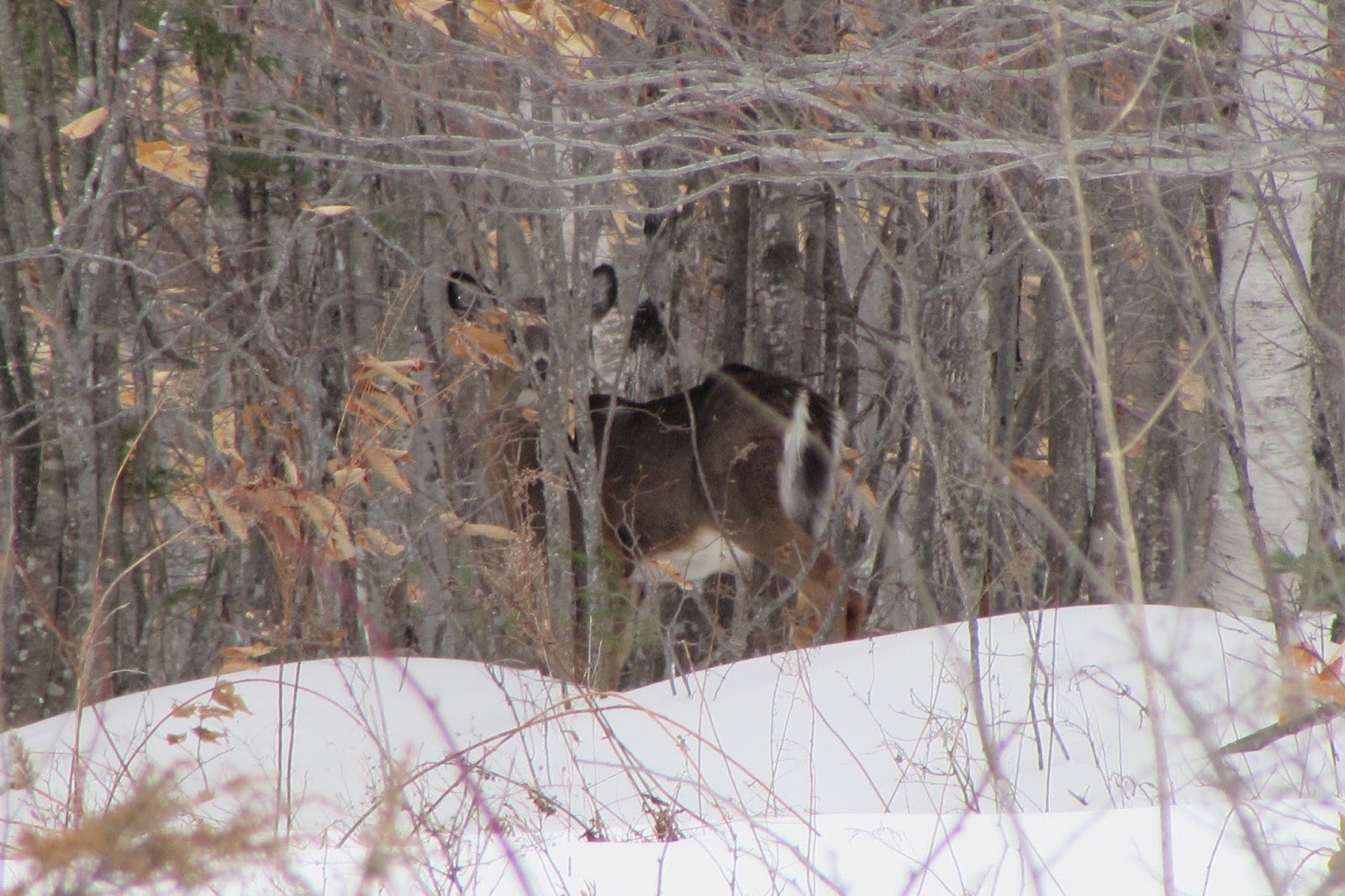 I was never able to get a clear picture to confirm that he was actually a he, but I like thinking that it was.  He slipped a little on the crust as he waved his tail and bound off into the woods.

Staci and I continued on to T3 and kept looking for sheds.  If that deer had been a buck, his antlers had dropped and maybe we could find them.  We walked and walked and walked.  Every once in a while we would break through the crust but overall, we were ok.  There were plenty of deer trails to follow so we kept an eye out for bone and more deer.

We easily crossed the stream and walked along an old skidder trail.  Staci found some chaga that I will need to go back and harvest but we didn’t find any sheds.  The snow was starting to get softer when we crossed back over the stream.  Pausing for a snack, we could see the opening where we had left the deer a few hours before.

I am sure it was comical if you were not the ones having to do it, but for every two steps we now took, we sunk and sunk a lot.  It was not uncommon for us to sink up to our knees or thighs.  What should have taken us a few minutes took us an hour.  We were exhausted and sweaty when we made it out of the woods.  We had lost one crampon; it wasn’t worth trying to go back for it (Dad later found it and brought it back home) but we had been able to see some healthy deer and get a good trek through the woods in.

We are batting 0-3 in looking for sheds but maybe we just use that as our excuse for getting out into the woods and walking around.  It will be sheer luck when we do find one!

I remember slapping my Dad's leg because I could see him coming down the hill and was so excited. I remember Dad telling me to get into position and he helped me pull my mitten/gloves off. I knew where the target spot was and I knew not to lift my head after I shot. I...
Read More

United, we win. The more involved you get with something, the more frustrated you can become when priorities shift, you see behind that iron curtain and you lose sight of what’s important and made you get involved in the first place. It’s hard to get reenergized and...
Read More

I got the interview!

I am interviewing Chandler Woodcock, Commissioner of Inland Fisheries and Wildlife tomorrow!!! Last chance if there is a question you want me to ask him! I will break the interview into 3 blogs throughout the next week or so. So stay tuned and let me know if you have...
Read More