When your hunting pants don’t fit 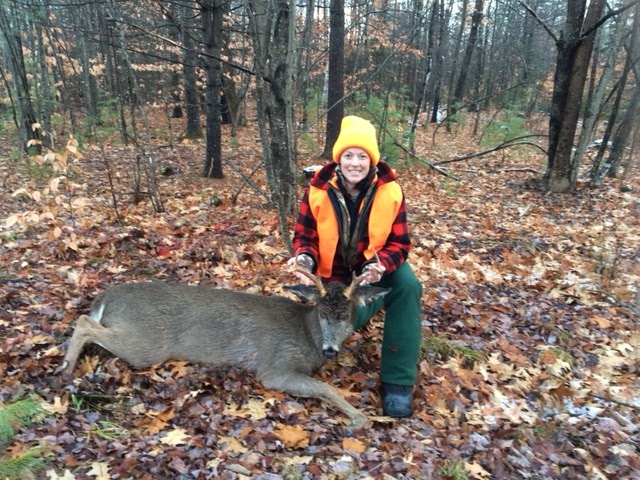 When your hunting pants don’t fit

This past fall, my routine became
almost comical.  I would leave my
backpack on the ground, climb into my treestand, get settled and unbutton my
wool pants.

Four years ago, I wore base layers
with monkey-thumbs to hide the Queeze-Away bands that I wore around my
wrists.  I never got sick, but those
early morning breakfasts and treks to the Sky Condo were a little more
challenging when I was trying to hide a pregnancy.  Dad makes sure that I am always secure and
comfortable when I am sitting 10-16 feet up in my treestands but if he knew I
was pregnant, I was not sure how far off the ground he would allow me to be.
So, I kept my first pregnancy a secret during the entire season.

I hunted, hiked and pulled the same 10
hour days with Dad that we always did.  I
would fall asleep right after dinner, but the fresh air and adventure of being
in the woods kept me going.   Hubby shot
his first buck ever that season; a small crotch horn and for me, the pressure
was on to get one myself.  The next day,
I shot my own crotch horn, which weighed more and had more bone on his head (I
am slightly competitive.)  The best part
was that I had had a successful season while pregnant with my son.

Fast forward to today and I have a
kiddo who out eats me when it comes to meat, loves to fish and has informed everyone
that he plans to shoot a Black bear, Grizzly and Wildebeest with his bow and arrow.  He overheard me talking about turkey hunting
this spring and eagerly said that he wants to go. He is anxious to get into the
woods and we are excited for him to start sitting and watching for
wildlife.

I did the same thing last fall that I
had the first time; Dad didn’t need to know I was pregnant until it was
necessary, which turned out to be half way through the season when I got
sick.  I had proven that I could hunt
while pregnant the first time around so I continued to climb into my treestands
to hunt.  I was not dying, just pregnant.

Hubby shot a nice 6-pointer on opening
day of rifle season and Dad and I continued to hunt. I had my routine and made
sure to keep myself hydrated as I climbed in and out of stands and buttoned and
unbuttoned my pants to keep my growing mid-section happy.  I also kept my backpack filled with snacks
with me, which is something did not have four years ago.   But just like back then, I matched Hubby with his deer, shooting my own 6 pointer on the last day of rifle season.  And again, (see slightly competitive comment above) my deer weighted more and had more bone on his head.

I’ve successfully gone 2 for 2 for deer while pregnant and I am
happy with that. No more babies for me, but hopefully a lot more deer!

Sharing the news with the family

On Christmas Eve, we told my parents. To say Dad was shocked is an understatement. This is the last entry for what it was like to be pregnant during hunting season. It is pretty surreal to think about the next hunting season and the fact that come November (or opening...
Read More

What it means to lose a deer

It was horrible. I remember the noise she made when she dropped. How she spun on the ground trying to get back up. I can remember pretty much everything about that 2pm sunny, Saturday afternoon in November. I remember her finally getting back up and thinking she would...
Read More