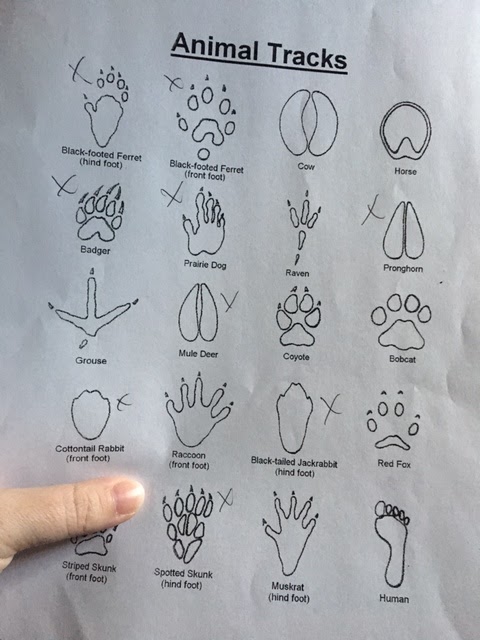 A few weeks ago, my kiddo was handed a piece of paper from his teacher.  I was standing next to him as she told him that when he and his family go for walks in the woods, we could look for some of these animal tracks.

My first thought was that it was odd to see “cow” listed there since you don’t typically find cows in the woods.  As I skimmed down through the sheet, I was mortified. When I got home, I made an “x” next to all of the animals/tracks that do NOT live in Maine.

To me, this is just laziness. There is no moose or white tailed deer listed on here.  No black bear or turkey.  Even if you had no idea about the outdoors and the animals who live in your home state, you still know that the four animals that I just mentioned, are found in the woods.  A quick scan of this sheet SHOULD be a red flag since we don’t have badgers here or mule deer.  Maine is not the prairie.

As kids get further and further away from knowing the animals that live in their State and understanding their importance to the overall ecosystem and economy, the last thing we need are teachers who think that this is ok.  My kid never saw thing sheet, it ended up in the trash.

But, being the outdoorswoman that I am, I went to the IFW website and grabbed this actuate listing of the animals in Maine and their tracks.  I made enough copies for everyone in the class (and a few extras) and brought it in the next morning.  When my kiddo say the copies, he was concerned that I was giving away his track sheet but I assured him that we were just sharing the information with his friends. 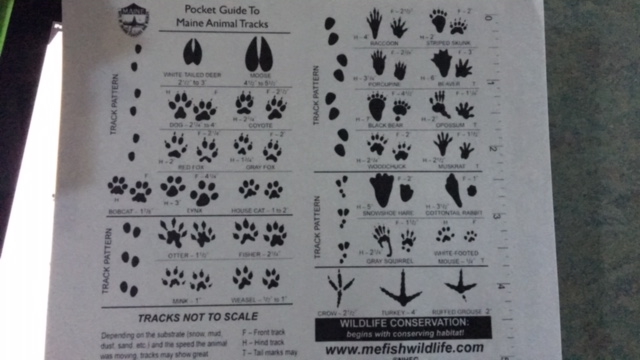 If we want more kids to take an interest in the outdoors and be successful when they are out in the woods, then we need to give them correct information.  Can you imagine a poor kid here in Maine looking for a pronghorn track? or a ferret?  The kid would never find one and be discouraged.  As more parents become disconnected from the outdoors, the last thing we
need is for teachers to be sending home inaccurate information.  Give them a list that has deer tracks and turkey tracks and there is a huge likelihood that they will find some.  That might be just enough to get them interested in the woods and exploring it more.  It is easy to get kids interested in hunting and conservation IF they are given accurate information right from the start.

← When your hunting pants don't fit Are you my father? →

We searched and searched... eventually we did find a partridge. Before I could take a picture of it, it lost its head And it was SO YUMMY!!! We saw 2 hornet's nests. The story is that the higher the nest, the worst the winter will be (or best, if you love snow like...
Read More

Nurturing a Love of Nature

In the past twelve months, I've been a homeschooling teacher (temporarily), figured out how to work from home full-time and maintained a stable supply of toilet paper. We went from being out and about in the community to everyone at home. It was a lot! But one of the...
Read More

1 week from tomorrow, I will be heading up the our hunting grounds to start the 2011 season. Yeah! There are things I need to get done before the season starts. 1. Get sick. I have been mia the past couple of days because I have been really sick. CHECK 2. Get wool...
Read More