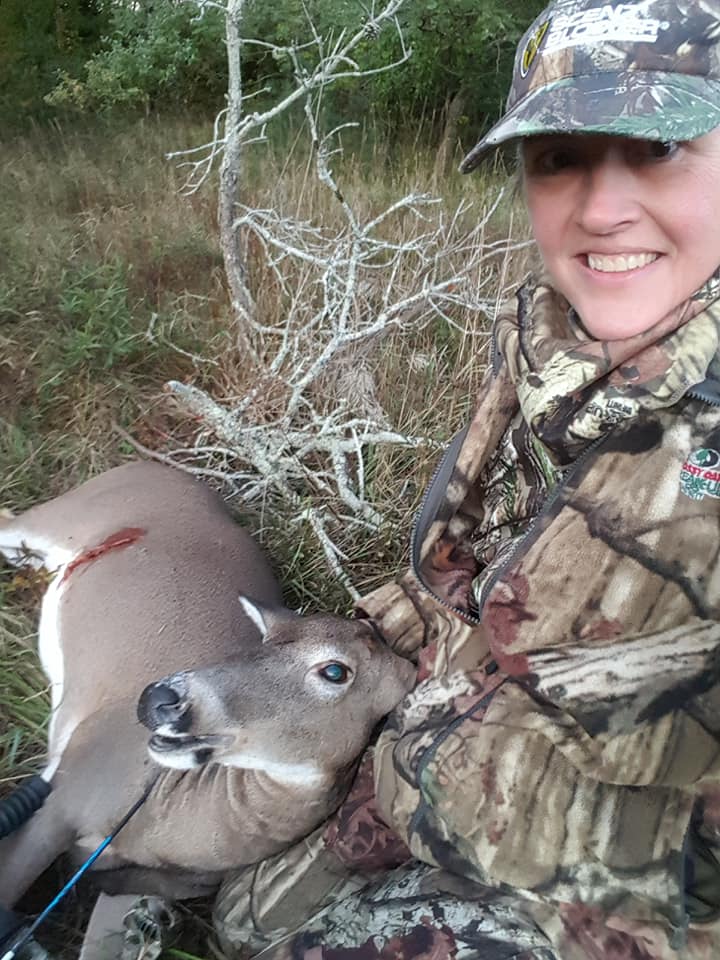 Some women have the type of attitude that lets you know that they can and will accomplish anything that they set their mind to.  Lorri Nelson is one of those women…

There is a shock factor that comes when you shoot the last animal needed for your grand slam. After years of hard work, learning to hunt each animal and a little luck, Lorri Nelson accomplished her grand slam when the cow moose dropped to the ground. “It was only four hours into the hunt,” Lorri said, “We didn’t bring the trailer or 4-wheeler because it was rattling so bad and we didn’t want to spook anything.” They had done some scouting ahead of time and were now looking for a cow moose in Zone 6. “I saw her entire body move in the woods as we drove past a strip of woods. But I couldn’t tell if it was a bull or cow,” Lorri continued, “Charlie and I got out and started zig zagging back to see if we could tell for sure if it was a cow. He confirmed that it was a cow and I shot.” Adrenaline kicked in and Lorri had to calm herself as she got closer. “I saw her hunch up when I shot but she didn’t drop. I had to shoot her again.” It didn’t kick in at first that she had just accomplished her grand slam but soon, the realization caught up to her and she was elated. Lorri had been putting in long hours in order to give her the best opportunities possible to accomplish this goal.

specifically bear hunters – existed in and around Portland. She was willing to work hard and do whatever she had to in order to punch that tag.  At one point, that meant dumping a disgusting bag of lobster shells into a hanging bait bucket.  I gaged the whole time. But Lorri was determined to work hard and get the job done.

This past season, Lorri had one week to bear hunt before she took herself on a long overdue vacation. “I knew that time was limited,” she said, “I had a big bear coming in on my trail camera and I really wanted him, but when this bear came in at 3pm on opening day… I just couldn’t let him pass.” From her tree stand, she checked off the first box of her grand slam.

Next, it was turkey time. Lorri hadn’t gotten a spring turkey and was worried about a fall turkey being in the cards. But, she had a great location and spent hours in the blind to get as many

opportunities as she could. “There were a few of them nearby and I really wanted the big tom but I shot the tom closest to me” She laughed. Box number two got checked off. “When I tagged the turkey, the woman at the store commented that I shouldn’t have any problem getting a deer out of that same location. I told her to wish me luck and I started bow hunting the next day.” It had been more than four years since Lorri had tagged a deer and she had never taken one with her bow. She had expanded permits and a doe tag in her pocket so she was ready for any deer that she could get a shot at. “I had the doe come in and as she was quartering away, I launched an arrow into her. It hit her lungs and that was it.” Lorri was in shock, “It is the first kill that I have had with my bow and I did it as a part of my grand slam. I was pretty pumped.”

By the middle of October, Lorri had checked off three out of the four boxes for her grand slam.

With her successful moose hunt, she accomplished something that most hunters have on their

bucket list. “I still can’t believe it” she said.

And like most outdoor women I know, when one item gets checked off the bucket list, two more

get added. “I am going to start coyote trapping,” she explained, “I have four traps and found

someone to help me get started.” Go get ‘em Lorri!

← How good is the fishing in Maine? I couldn't wait for the big one →

Staciand I headed out again for our second fishing adventure! For the second time, the water levels where we wanted to go were too high so we headed to my hometown to try our lines in the river. The Kennebec River The Kennebec River It was fantastic to be fishing...
Read More