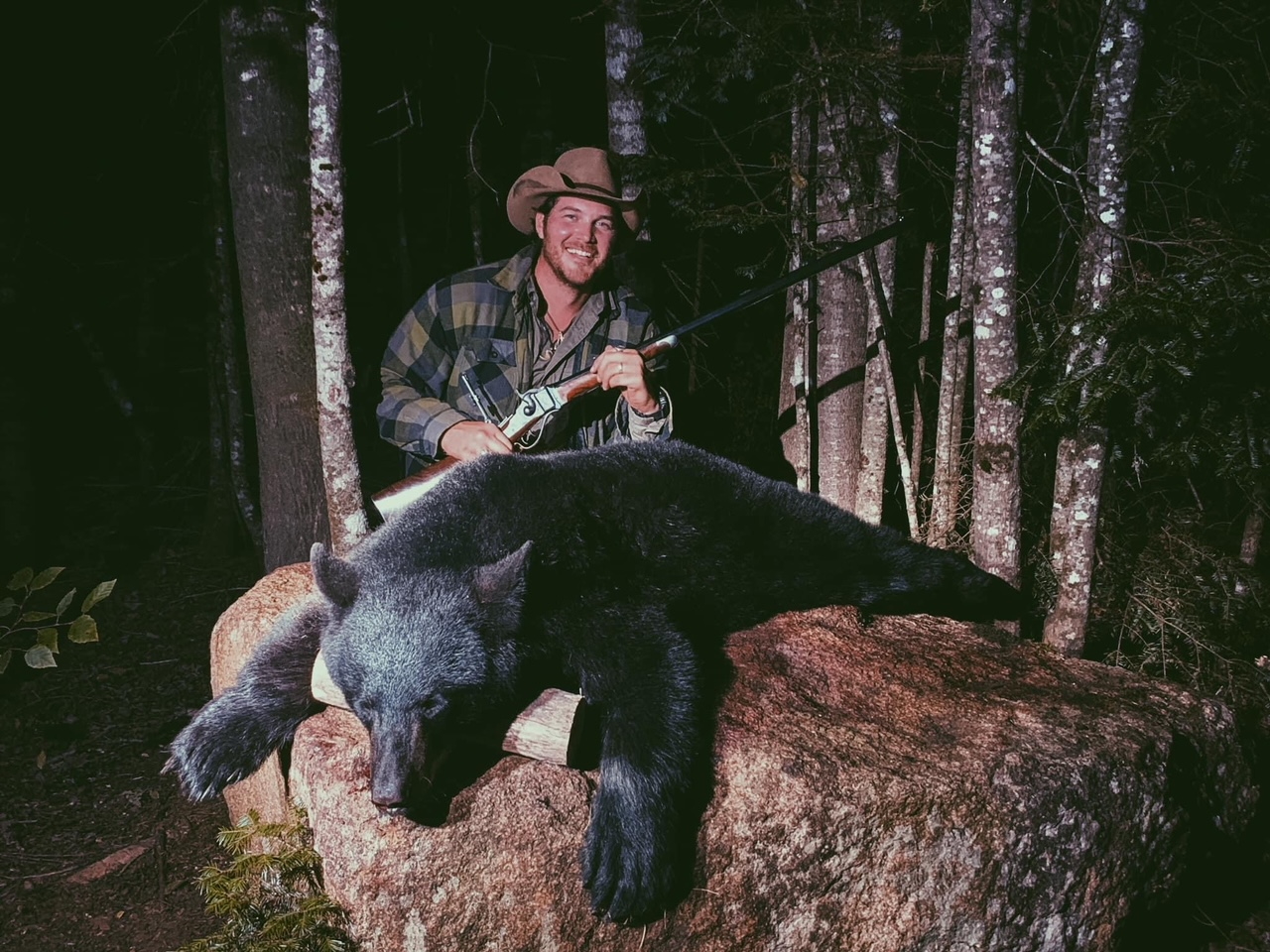 Jesse Phillips had no intention of bear hunting.  He was along for the ride with friend and host of Blood Origins, Robbie Kroger, who was on his annaul bear hunt with Grove Hill Outfitters.

Being convinced that he should go hunt, Jesse grabbed the 45-10 and headed into a treestand.  He wore his cowboy boots, jeans and flannel, “the only thing I didn’t do was put on deoterant” Jesse laughed.  Climbing up into the stand a little before 2pm, he held no expectations for seeing his first bear in the wild.  He was doing this just to apease the guys in camp.

At 4:02, a bear appeared. “He was about 40 yards away,” explained Jesse, “and he was just walkeding around, sniffing and eating.  He wasn’t interested in the bait at all.”  Watching the bear, Jesse knew he needed to remain calm. He was in no position to move his gun and take a shot without the bear spooking. The bear walked in and out of the opening with no intention of heading to the bait. Jesse watched and tried to keep an eye on the bear every time it would dissapear into the trees.

When the bear finally emerged the last time, he was even closer to Jesse and the treestand. The bear sniffed and grabbed the stand and looked up, offering a stare-down to the man sitting above. Jesse froze, “I could feel the stand shift a little with the bear’s weight on it.” He focused on not moving a muscle and controlling his breathing.

Not interested in what was in the tree, the bear returned to the ground and sauntered off to the left… the same direction that the gun was pointing. Jesse quickly lifted the gun and shot, not wanting the bear to slip back into the woods and dissapear. “I heard the death moan before his whole body hit the ground,” Jesse said. A perfect double lung shot for an unlikely bear hunter.

Knowing the bear was dead, Jesse climbed down from the treestand, held his gun in one hand, the bear in the other and headed out of the woods.

“I don’t know why people say bear hunting is so hard,” he laughed as he flipped through pictures of the hunt, “I don’t know if I will bear hunt again but it’s a great story.”

← Grateful for the community Some Shane Mahoney Inspiraton →

Must have clothing for outdoor women

I did a radio interview recently and was asked about women's hunting apparel and if it is getting better. I ecstatically answered Yes!  Thanks to my involvement with EvoOutdoors, I have been fortunate enough to learn what you really need to be wearing when you...
Read More

In an effort to learn how to trap, I asked my uncle to take me out when he set his traps last winter.  He agreed and we went out to set some beaver traps and learn how it’s done. My uncle has been trapping for most of his life, so he knew which areas to check for...
Read More