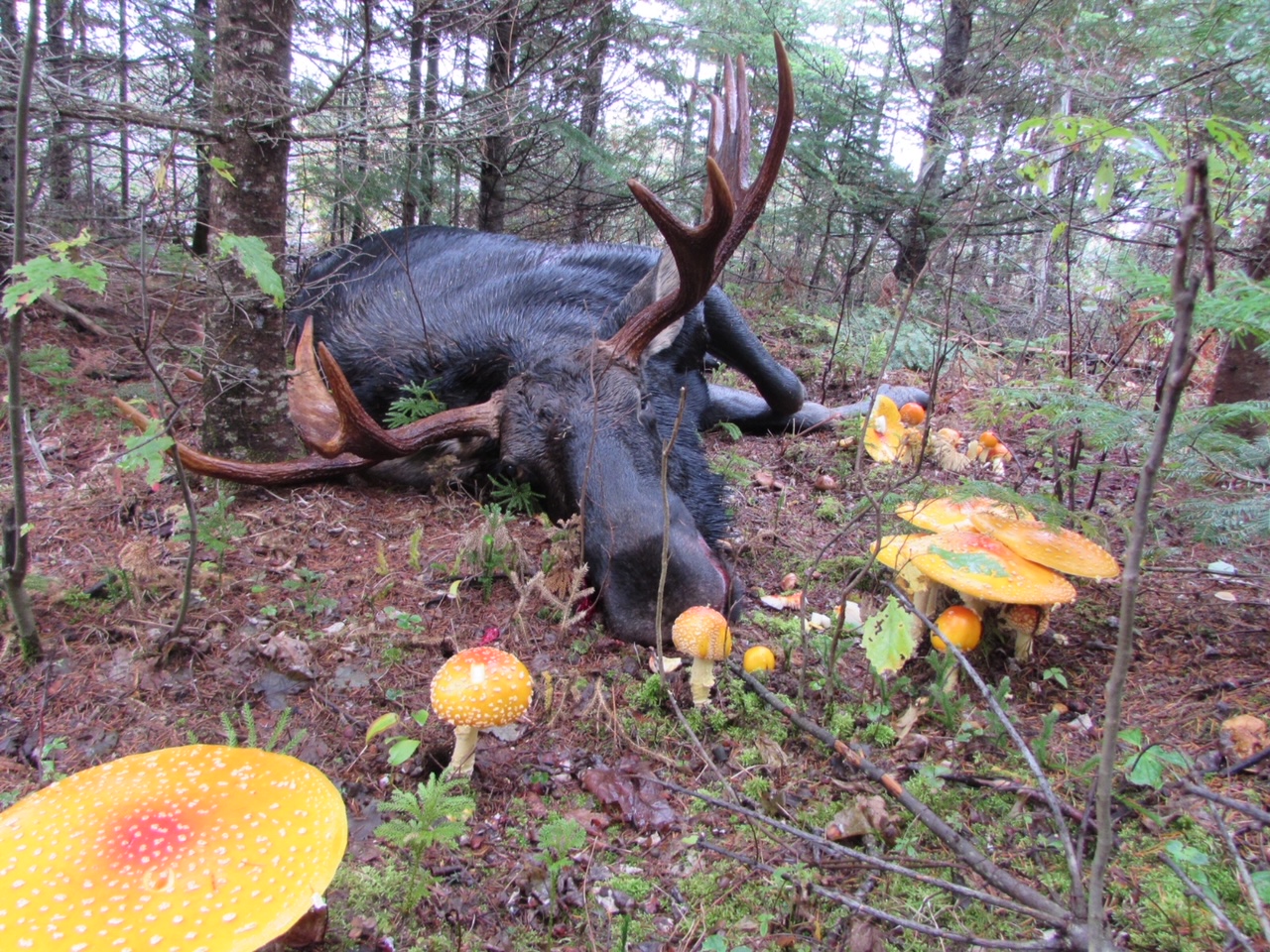 It had been an emotional start for our 2021 Maine moose hunt.  But we pushed on and had three more days before the season ended.  Wayne was determined to find us a moose somewhere in Zone 2.

It was rainy and cold when we headed out.  The two bulls from the day before had not been shot so we planned to head back to that area. We met a red truck parked where we had seen the small spike bull.  We drove on to where we had seen the bigger bull.  There was a cow in the clear-cut to our right.  We parked the truck and Pat and I started walking into the woods. Dad and Wayne walked parallel to us in the road.  Moose sign was everywhere.  But the moose were not.  We left and checked multiple roads where we had previously called and hunted.  Silence. Occasionally, we would find the remains of a gut pile.  After a few hours, we returned to the original clear cut to find a truck parked on the side of the road. Dread swept over us.  Pat rolled his window down as we approached. A father, son and grandson stood over a nice bull. “He was just standing in the middle of the clearing over there,” the father explained, pointing to where we had watched the bull go yesterday.  We congratulated them and drove off.  I looked at the moose.  “He was too small anyway” I said, trying to joke with Pat and Wayne. 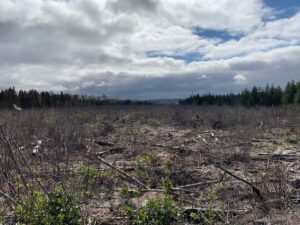 The sun returned and it was beautiful and cold out. Two hunting groups out of five had tagged out. We returned to where we had started the week and continued hiking and driving and calling.  Time was running out and the sightings were getting few and far between.  We decided that we would call the season over at 11am on Saturday.   As we hunted at one end of the road, we got a call that another hunting party had been successful at the other end. “There is another bull with this one.  He won’t leave this one alone and we had to chance him off,” came the call from Kevin, another guide. We took off – to help and to see if we could track this bull down.  While Wayne helped Kevin and his hunters, Dad and I walked the dirt roads, looking for the bull.  We walked and walked.  We didn’t find him, but we knew where we would start our morning on Saturday.

We had 5 hours left in our hunt.  It was another foggy morning.  On our way back to where Kevin and his group had been the afternoon before, Wayne slowed the truck and picked up his binoculars.  “Is that a blowdown or a moose?” he asked. We squinted. Then, it moved.  We couldn’t tell if there were antlers or not. As we got out of the truck, a second moose started running.  Was it a cow and bull? They were far enough away and the fog was thick enough that there was no way that we could get a shot at them.  I took a deep sigh and got back into the truck.  We checked the clear-cuts. Nothing.  We drove down long, winding dirt roads. Nothing.  “Where to now?” Wayne asked me.  “Let’s check Kevin’s spot one more time,” I said expecting that we would just drive by.

Wayne turned left and drove down the edge of the cut slowly.  I stared out the window to my right, trying to will a moose to appear.  The trees on the left side of the road gave way to a cut on both sides of the road. “BULL!” yelled Wayne, “BULL!” Dad and I flung the doors open, loaded our rifles and took our positions.  Dad was behind the truck and I was in front, with Wayne.

I don’t remember initially seeing the moose walking in the chopping.  I just remember him standing surrounded by saplings everywhere. We shot and shot again.  I watched through the scope as the bull hunched from the impact of one of my bullets.  The bull wobbled and headed into the woods.  Wayne took off across the chopping with me and Dad following him.  Trying to find the spot where the moose entered the woods, Wayne began to yell, “I hear lungs!” He was jumping up and down. Dad and I caught up with him.  There, only a few feet into a woods was a magnificent bull moose.  We had done it!  Emotions ran high.  It had been an incredible week and here we were, at 9:18am on Saturday, we had our bull.  There were hugs and smiles all around. 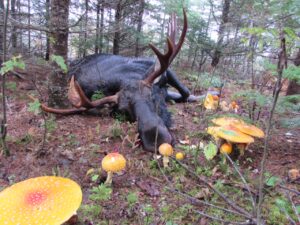 Wayne radioed to Pat and fellow guide Ernie Spaulding.  They happily came to help, the same way he had helped Kevin the day before.  They were just as happy and excited as we were.  We used my range finder to figure out that our shot was 206 yards from the road to where we saw him hunch up. Dad and I watched in amazement as Wayne, Ernie and Pat got to work gutting the moose and getting him out of the woods.

“Are you getting this thing mounted?” Ernie asked me.

I smiled, “Of course!”  That added to their work as they had to pull the moose out of the woods by his legs, then turn him so that he was being dragged head first and his hair would go with the grain and not get rubbed off on his way to the truck.  Their system was simple and efficient with ropes and a truck. Within an hour, the moose was loaded up and we were heading back to camp. 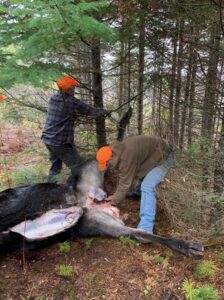 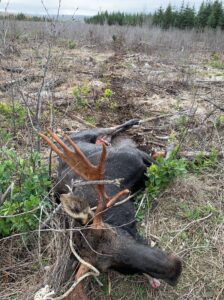 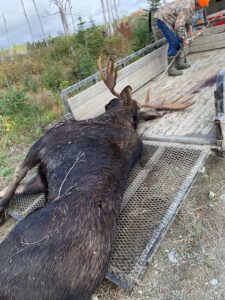 We were all on cloud 9 as we got back to camp and hung the bull moose up.  It was still surreal that we had done it.  We spent 5 days hunting sun up to sun down and then it was over in a minute or less.  We had done it. It wasn’t easy and the week had been an emotional one but in the final hours of the season, we had a chance at redemption and made it count! 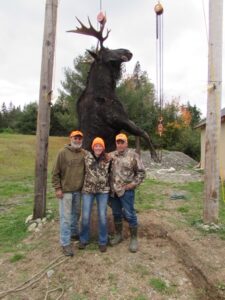 We got the moose loaded up in the truck and drove to Ashland to tag it.  Our moose was the second largest moose tagged there; 986lbs dressed! On the hoof, he was more than 1200lbs.  His rack measured 47 inches – perfect for a head mount in my office.

It was a memorable 2021 Maine moose hunt with Wayne and all those at Allagash Adventures! It is something Dad and I will think about and talk about for years to come.

Wow! It has been a year since I started seriously blogging. It all started with a Hemingway quote on Twitter. Followed by some tweets and emails and before I knew it, I was being interviewed about my hunting. If it were not for Rabid, who knows if this blog would even...
Read More

For some crazy reason, I actually thought I would have a problem finding ways to keep the conversation about hunting going throughout the winter. So far, I have been lucky with all of the things happening... such as this story about a Texas breeder who smuggled in...
Read More

About an hour into my sit, I heard steps coming towards my stand.  It was a beautiful morning and my heart skipped a beat with the idea that a deer might finally be headed my way.  Trail camera photos showed my last remaining target buck during daylight at that stand,...
Read More