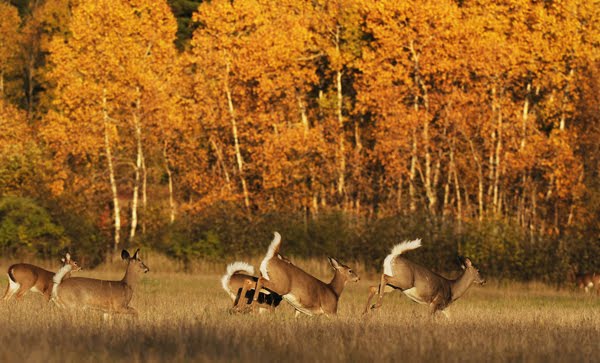 Just out in the Bangor Daily –

White-tailed deer bound across a field in Orono in October 2010.

By GLENN ADAMS, The Associated Press

AUGUSTA, Maine — With hopes of rebuilding a deer herd that’s shrunk in parts of Maine to worrisome levels, Gov. Paul LePage has signed new legislation that implements multipronged strategies laid out in a bill that passed last year.

The new laws, signed Monday by LePage, are aimed principally at two areas: restoring all-important deer yards that help the animals survive Maine’s winters and controlling coyotes where they are the biggest threat to deer.

Wildlife officials say one of the best ways of protecting deer yards is through cooperative working agreements with large timberland owners to leave those areas intact.

The legislation adds $100,000 to the fish and game department’s predator control program. With money left over from this year, the department will have $150,000 to reduce coyotes’ efforts next year.

I sense a follow up with Mr. Woodcock coming up!

← If it's legal, who cares? Conservation and Common Sense: Working to preserve Yellowstone →

We searched and searched... eventually we did find a partridge. Before I could take a picture of it, it lost its head And it was SO YUMMY!!! We saw 2 hornet's nests. The story is that the higher the nest, the worst the winter will be (or best, if you love snow like...
Read More