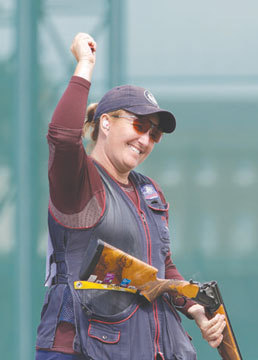 I had no idea who she was. I was stuck watching the bike racing, some volleyball, maybe a little swimming and gymnastics. I would have had the TV on the entire time if the TV station had skeet shooting on. Especially since Kim Rhode became the 5th individual of all time to win a medal in 5 consecutive Olympics. And she won them shooting a gun! She is my new hero.

I have never shot skeet. I have never tried. But, Dad and I have decided that I am much better in a stand, 16 feet up a tree than I am on the ground. Perfect example: 3 years ago, I drew a doe permit. Dad and I decided that I would stand against a large tree in the woods while he went into a small chopping to see if he could jump any deer that, in turn, would run towards me. I had plenty of visibility from where I was, so I stood and waited. I waited maybe 15 minutes. Maybe. I heard the snap of the branch and the thunder of running. And I saw two beautiful does run out of the clearing and right past me. I actually remember saying to myself “Awww… two does” and then I realized what had just happened and looked around to see Dad laughing as he walked back to where I was. I just stood there. I didn’t even try to lift my gun. Hunting fail! That afternoon, we headed to a regular spot, I climbed into my tree seat and a couple hours later, shot a doe. From my seat, 16 feet up in a tree. I clearly need that advantage. Kim Rhode would kick my butt in a shooting competition. Basically, anyone who can shoot at something going faster than a slow walk could out shoot me.

So, while the world watches Michael Phelps and Ryan Lochte battle it out in the pool, I will be proud to know that the US was represented in skeet/double trap by a woman and her gun. Kim has proven herself to be hero worthy and I hope more young women realize these great accomplishments and see Kim as the role model she is. As Americans, hunters and (for those of you who fit into this category) women, it is our responsibility to promote Kim’s great achievement and be proud to have her represent us in London. Even if she won’t get the air time she deserves, I hope she realizes how proud we are.

Here are a few links for more information about Kim Rhode.

Ok friends, while I don't have any venison hanging up, it was a fantastic weekend! Incredibly cold but awesome. Dad and I were in the woods by 5:30, sitting in our Sky Condo (pictures coming soon). We were there for 4 hours, then moved to my tree seat and dad started...
Read More

Goal for the future

I just saw this and it kinda pissed me off: http://bangordailynews.com/2011/07/14/uncategorized/republican-lawmaker-to-lead-sportsman%E2%80%99s-alliance-of-maine/ Maybe its the stereotype that Maine hunters and sportsman are Republicans who love their guns (maybe...
Read More

After my incident last season, Dad decided that it would make more sense to be hidden in the woods and have more coverage than my treeseat gives me.  This will help me get a better view of the more traveled deer trails and not rely on the deer to come my...
Read More

Not what you want to see on the trail cameras