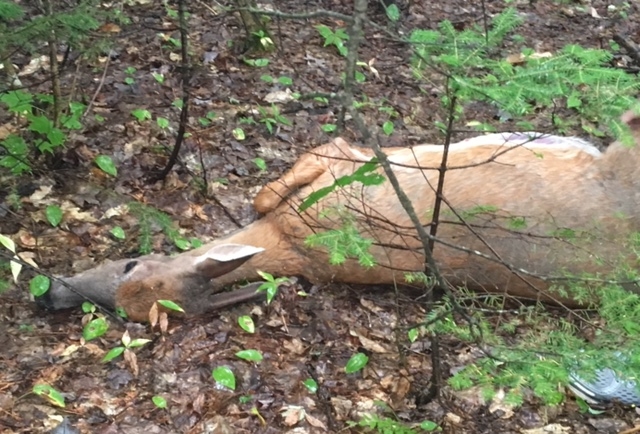 I didn’t see the fawn but I watched in slow motion as the doe hit the corner of the oncoming jeep and disappeared into the tall grass. I hoped that it was just a brush with the bumper and that she would be OK.

The driver pulled over and began to walk along the edge of the road to see if the deer was OK. I pulled over on the opposite shoulder and asked if he was OK. We saw the doe struggling to get up and she made a horrific noise.  I assumed that she had a broken leg so I asked my mom to leave me on the side of the road with the driver and go to my house to get the gun. I placed a call to dispatch was put in touch with a warden. He asked if I was able to dispatch the deer and if I wanted to. The last thing I wanted was for this deer to suffer so I said yes and wrote down the tag number.

It was dump day in town and the man had planned on making it a quick trip so he did not bring his phone with him.  We gave him a donut and my phone to make some calls; one to his wife so that she could come and pick him up and one to the tow truck to come get his car. What I thought was just a side hit had actually been a full on sideswipe. His grill is pushed in and we could hear the hissing sound from under the hood.

The rain was dripping off of the brim of my hat when my mom returned with the gun.  I slipped two rounds into the chamber and I walked into the woods with the man right behind me. I could tell that the deer was dead by the way she was laying. But, I still walked over and poked her with the barrel of the gun for some peace of mind.

While we waited for others to arrive, the man and I talked about hunting and the importance of keeping the populations in check. I assured him that just because the doe was dead did not mean that the fawn was doomed to die as well. He was very upset and felt bad about having not seen the deer crossing the road. He was not a hunter so we discussed what it means to be a hunter and the ethics behind ensuring that no animal suffers no matter how it is killed… by a gun, bow, or car. We spent a couple hours on the side of the road, in the rain, taking about hunting to eat, sharing meat with family and friends and why some of the best experiences hunting are when you watch the wildlife and don’t take a shot. 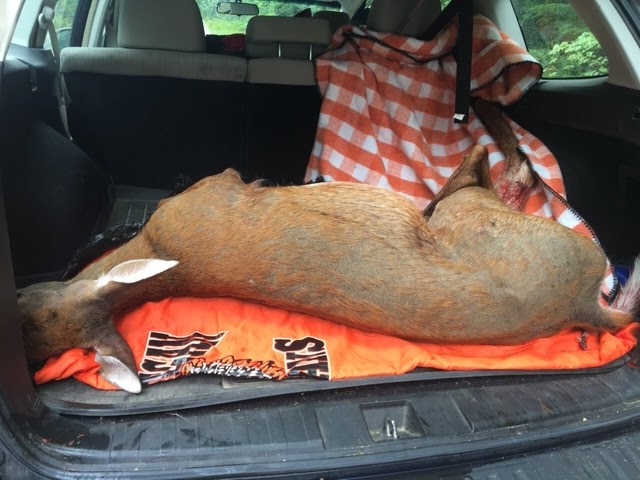 We got the doe gutted and into the back of my car.  The man and his wife were able to get the jeep towed and head back home.  It was a sad morning but a learning moment too.  Hunters are so much more than just hunters.  We are teachers that have the ability to show non-hunters why these animals are important to us and just how seriously we take that responsibility.

In Maine, it is easy to brag about our bear biologists.  I did some quick math and with conservative estimates, Maine's bear biologist Randy Cross has spent more than 72,000 hours studying and working with our black bears.  That blows Malcolm...
Read More

Staciand I headed out again for our second fishing adventure! For the second time, the water levels where we wanted to go were too high so we headed to my hometown to try our lines in the river. The Kennebec River The Kennebec River It was fantastic to be fishing...
Read More