That is what popped up with my name as I watched the 2021 Moose Lottery.  The excitement was accompanied with an urgency to begin planning.  We would need a guide and possibly more gear. I wanted to plan to go for my grand slam and try for all of Maine’s big game animals – a bear, moose, turkey and deer.

The following three months flew by and before we knew it, Dad and I were making the 5 hour drive up to the Allagash, Zone 2 and Allagash Adventures to meet our guide Wayne Bernier, for our 2021 Maine moose hunt. 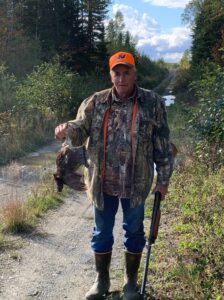 We left at daybreak to begin searching for moose.  As we crested one hill, Wayne stopped the truck and lifted the binoculars.  There were two moose on the edge of the road ahead of us.  They were so far away that I could not see them. However, it seemed like a great way to start the week. It was the first day and we were excited to see what the week would hold and if we would come home with a bull moose.  We saw one more cow throughout the day and Dad shot a few partridge.  It was disappointing not to see a bull but we knew we were in the right area.  But, we had no idea what kind of week we would end up having! 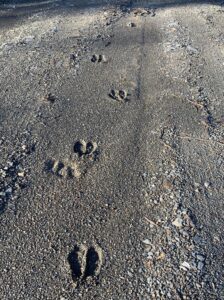 It was a great day for bird hunting, not so much for moose hunting.  We spent a few hours on one particular road that showed lots of good moose sign.  Nothing was responding to our calls and the other guides were reporting the same issue; the moose were quiet.  We took a break from that road and headed to a different location. An hour later, as we worked our way back to original road, we met a truck with a nice bull sticking out from the truck’s bed.  Our hearts sank.  As we turned back onto the road that we had spent so much time on, there it was: a gut pile maybe 50 yards from the main road. Had they benefited from us calling this bull in without knowing it? or had it just been a matter of right place, right time as the bull walked by?

It was foggy as we drove down the dirt road.  We decided to hunt in a different area and had an additional guide, Pat, with us.  There were clear cuts and choppings as soon as we drove in.  We parked the truck and called. It felt like a perfect morning for moose to be moving.  A white truck passed us and revved it’s engine, louder than necessarily.  Nothing came in or called back, so we moved on to the next spot.  We drove around a corner and saw three moose coming down over a hill at us.  We stopped the truck and watched.  They were close. The one in the middle turned and we could see that it was a bull with spikes. He was a legal bull.  We jumped out of the truck but the three moose turned and ran back up the hill and into the fog.  It was a great start to our morning. 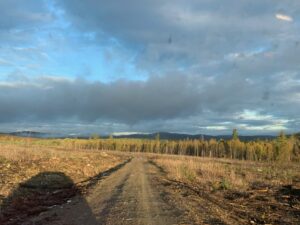 We continued on and came to a large chopping.  The road split; heading straight ahead of us through the middle of the clearing or dipping into a valley to the left.  Parked in the valley was the white truck.  We headed straight and as we got to the top of the ridge, three moose were running away from us. One was a nice bull with a large set of antlers. The white truck was parked too low in the valley to see them. Dad and I jumped out of the truck and loaded our guns.  Pat and Wayne followed and stood in the road near us, watching for the moose to come back out.  We could hear electronic moose calls coming from the white truck. The moose had run into a small strip of woods. Like a picture, they started to cross the road in front of us. Pat called to get them to stop. They were back lit by the sun.  The bull was first, then the two cows.  Head to tail, they filled up the entire road.

I raised my rifle, put the sights on the bull and squeezed the trigger.  Nothing happened.  My mind raced.  Why wasn’t my gun working? I squeezed the trigger again.  I could hear Pat and Wayne yelling “shoot! shoot!” I was doing everything I should be doing, what was happening? We watched the last cow start walking again and push the bull and second cow across the road and into more woods. They were gone. I looked at my gun.  My safety was not completely off and from where my thumb rested, it couldn’t push the safety forward enough. I had blown my hunt.  I was devastated.

There is a mental toughness that you need when you are hunting.  You need to have the determination to keep going.  To know that things won’t work out the way you want them to.  I told myself that no shot is better than a bad shot. We were half way through the week.  I had an opportunity and couldn’t make it count.  But, I had to keep going. I had to take in the experiences of the hunt and appreciate being there with Dad.  I prayed that we would get another chance to punch our tag. We had three more days…

← Bear hunting can be exhausting Redemption during our 2021 Moose Hunt →

Recently, I have been doing some research on this topic and asking my friends on Twitter if they have restrictions like this where they hunt. If so, do they think it is an effective method for growing and creating a healthy herd. Here are some of the comments:...
Read More

In honor of my Dad, my Birthday and being an Outdoors Woman

Dad, Hubby and I headed into the woods to see where all of our deer are.  We found them but we also found some cool tracks in the snow.  Can you tell what they are? Look at all of those drag marks! Straight line of tracks Two by two tracks Can you see those...
Read More