I need to start by thanking my friend Staci and her husband for making this happen. They helped to get the bait site up and running.  Staci was as determined as I was to get me a bear. Everyone should be so lucky as to have a hunting partner like her!

The 2021 Bear Hunting Season kicks off! 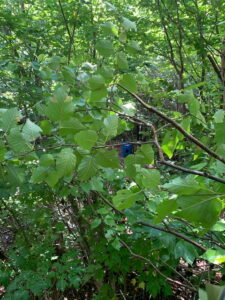 My limited view of the bait site

Bear hunting season opened on Monday, August 30th, and trapping season opening on Wednesday, September 1st.  With my trapping license and Staci and John’s help, I planned to initially hunt over bait and try trapping.  The first night with the traps out, we watched as a bear tripped my trap, looked at the cable and walked away.

The next afternoon, Staci and I headed out to reset the trap and sit.  We adjusted the trap so that when it went off, the bear would be surprised and pull its paw back quickly and tighten the cable.  It would prevent another bear from walking away.

The wind was blowing as we set up the tree seat next to the stand. In doing so, we moved some branches that resulted in my view being obstructed. All I could see was the bait barrel and that was only if I leaned hard to my right. The wind swirled around us and the smell of the bear bait scent was strong.  If a bear was in the area, they could easily smell it.

As the temperatures started to drop, we decided to climb out of the stand. If there was a bear around, it could probably smell us and would be waiting for us to leave.  The trap was ready to go at the site and we knew there were plenty of bears around. Little did we know what was ahead of us later that night… 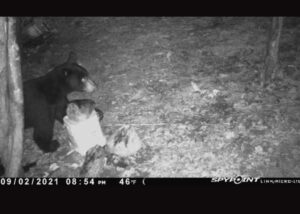 Arriving home around 9pm, I inhaled some crackers.  I was exhausted and needed to wash the bait scent off of me. Stepping out of the shower, my phone was pinging. Notification after notification was flashing on my screen.  There was a bear. At the site where we had just been.  His left paw was extended to his side.  He was trapped. It was 10pm and in Maine, you can legally dispatch a trapped animal at any hour, any day of the week.

I threw my hunting clothes back on and put a hat over my wet hair.  I grabbed my pack and rifle and headed out the door.  It was close to 10:30pm when I reached Staci’s house and with her husband, we headed out.  Again.

We continued to get movement notifications on the drive.  We talked through the plan of what to do when we got to the stand.  John would stay on the ground and use a flashlight to get light on the bear.  Staci and I would climb back into the tree and she would hold another flashlight from that angle and I was the shooter. I would need to wait for the bear to calm down and stay in one spot so that I could ensure a good shot. 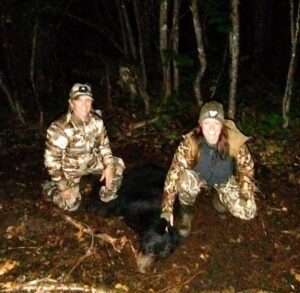 Staci and I when we came down from the stand.

The woods were quiet as we turned the truck off.  The sliver of moon did nothing to help with natural light.  Taking a deep breath, I put three bullets into my rifle. We didn’t say a word as we walked.  Approaching the site, we could hear the bear clicking his jaw and moving around.  The first time I saw the bear, we were already in the stand.  I had to do this right.  Staci moved the branches out of my view and I lifted the rifle and put the crosshairs on bear.  I found his shoulder and switched off the safety. He jumped as I was about the squeeze the trigger so I was forced to pause and refocus. I held the gun steady and waited.  Finally, he came back into view and stopped.  He was looking over his right shoulder, causing his head to block his vitals.

“When he turns his head, I am going to shoot,” I told Staci, who was leaning over the front of the stand, trying to keep her flashlight on the bear.

The smell of gun powder and the flash of light overpowered my senses. My adrenaline kicked in and I started to shake.

Great shot! I heard John call up to us.

I gave Staci a big hug.  I had the first big game species I needed for my grand slam. And I had trapped my first bear. 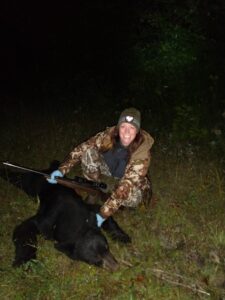 Tired but happy to have had a successful bear hunt

We climbed down and walked over to the bear.  There was no death moan.  I had made a neck shot and killed him instantly.  He was beautiful with a long brown nose and his right ear had a rip in it, probably from a fight. His front paws were the size of my outstretched hand and he had a small white patch on his chest. His hair was more course than the previous bears I had shot, but this was the earliest in the season that I had ever shot a bear.  My previous bears were taken at the end of September and my record-book bear was shot in the middle of October.

We snapped a few pictures as best we could at 12:30am and hauled him away from the bait site to gut him.  By 1:30, we were back at the truck with the bear loaded up.  A little after 3am, I drove back into my driveway and collapsed on the couch for a couple hours of sleep.

On Friday morning, I put the bear in the back of my car, tagged him and brought him to the butcher.  I was exhausted but happy.

Turkey season starts in about a week, followed by my moose hunt.  Here’s hoping that the month of September is bountiful and I can go into deer season needing only a whitetail.

When Staci and I headed to our last spot to fish, we flushed two birds from the trees.  Initially, I could not tell if they were hawks, turkeys or what... it wasn't until they landed on a tree across the stream from us that we could see them! Young Great Horned...
Read More

Me and the Commish: Part 2

Chandler Woodcock was sworn in as Commissioner as Inland Fisheries and Wildlife (IF&W)a little over a year ago. I sat down with him last week and talked about his life as an outdoorsman and what he hopes to bring to IFW in the years to come. This is the first part of...
Read More